Randall Breaks Through At Merced 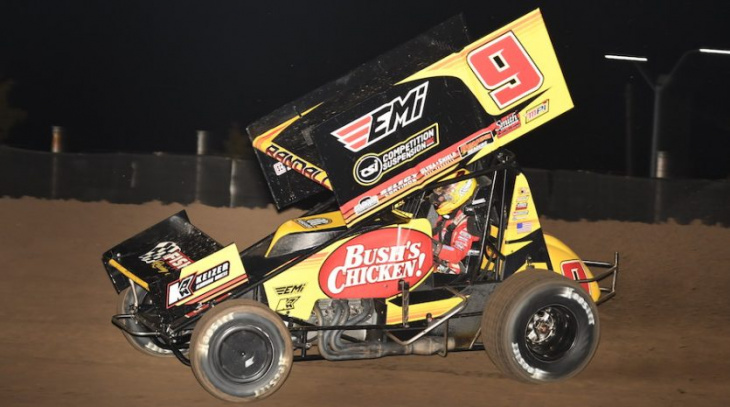 MERCED, Calif. — For Chase Randall, it wasn’t a question of if he’d win a sprint car race at Merced Speedway but when, and that question was answered on Thanksgiving Eve.

Heading into Wednesday’s race, Randall had three consecutive sprint car top-five finishes at the quarter-mile including a pair of podiums. After a frantic 30 laps, it was Randall finally standing atop the Merced podium as the winner.

The race saw five different leaders and Randall managed to position himself to be the fifth and final to hold the top spot as the Waco, Texas, driver claimed the final winged sprint car race in the country for 2022.

Corey Day and Chance Grasty made up the front row as the green flag flew, and it was Grasty taking the early lead from the outside row.

Just a few laps in, Day gathered enough momentum to slide Grasty in turn one to snag the top spot. Shortly after, a caution flew and began a pattern of misfortune striking the leader.

Day’s left-rear tire went down during the yellow, sending him to the work area and forfeiting the lead to Grasty.

Grasty jumped ahead, but the new runner-up, Dominic Scelzi, didn’t let him get far ahead. Scelzi reeled in Grasty and slipped by on the bottom of turns three and four, securing the top spot just before another yellow flew.

On the restart, Carson Macedo made some big moves on the outside to slot himself in the second spot and begin to cut into Scelzi’s advantage.

As the two entered traffic, Scelzi found himself slowed by a car on the bottom, allowing Macedo to rip around him for the lead. After being passed, Scelzi adjusted his line to keep Macedo just ahead. Scelzi rolled the bottom of turns three and four to draw alongside him.

Heading into turn one, Macedo slid himself to protect, and Scelzi stayed door to door with the World of Outlaws NOS Energy Drink Sprint Car star.

More bad luck hit the leader as Macedo, still side by side with Scelzi, entered turn three a little too aggressively, getting over the cushion and spinning to bring out another cation.

Under the yellow, leading was again not the place to be as Scelzi suffered a flat right rear and ended his night.

Those back-to-back issues gifted the lead to Chase Randall, and “The Quickest Chicken” capitalized on his good fortune.

On the restart, Randall pulled slightly ahead before Justin Sanders began to quickly catch up by ripping the cushion. Sanders managed to nose ahead for one lap, but Randall didn’t waver, going right by at Sanders with a slider to regain the lead.

From there, Sanders stayed close but couldn’t quite put together a run for another challenge for the lead as Randall won with Sanders just behind.

“That was an up and down race for me in the car,” Randall said. “I was really good at the start and then kind of confused on where to be in the middle of the race. Then I kind of found a line that worked for me in (turns) three and four to hang with Dominic and Carson. We had a lot of luck on our side with Carson overdriving just a little bit and it sucked for Dominic that they had a flat tire. The luck was in our favor this time and we got the win.”

After the early flat tire, Day charged all the way back up to third to complete the podium.

Keyword: Randall Breaks Through At Merced