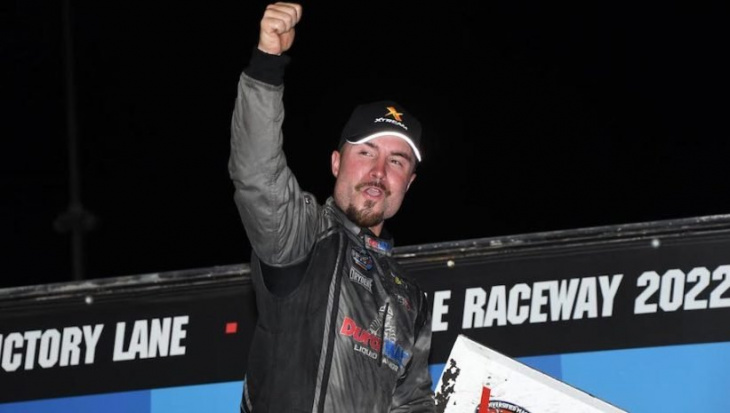 KNOXVILLE, Iowa — Logan Schuchart is on a mission at Knoxville Raceway and he made it clear with a statement win to kickoff Knoxville Nationals week during Sunday’s 11th annual Capitani Classic.

The Shark Racing gasser got an early lead, was passed by Donny Schatz midway through the feature, but then he rolled back by the 10-time Knoxville Nationals champion to claim his first Cappy triumph.

Schuchart has come so close to earning a Nationals title in the past two editions, a second in 2019 and fifth last year, and if his Sunday performance is any indication, he’ll be right up in the mix this Saturday night.

“We just wanted to get some laps in,” said Schuchart, who earned $9,000. “We wanted to see how we felt and hopefully help us for Saturday night. It was just nice get to victory lane and, hopefully, learn some things.”

The race’s initial green flag was halted by a quick yellow for the start, and on attempt number two Schuchart roared around the outside of pole-sitter Sye Lynch in turns three and four to lead the opening circuit.

After a lap-four caution, Aaron Reutzel put himself in contention with a monster move on the restart to jump from fifth to second. Schuchart pulled away from Reutzel, and behind them Schatz began to make his charge from his eighth starting spot as the race approached halfway.

The pilot of the Tony Stewart Racing No. 15 jumped into third on lap eight, and then just two circuits later he rolled into the runner-up spot and immediately began to run down Schuchart. 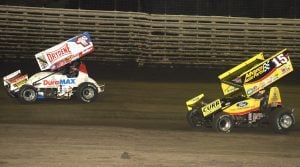 The margin that was roughly two seconds when Schatz took second-place was down to a second within a couple laps. And then with 10 laps to go Schatz caught the tail tank of the leading No. 1s.

On the next lap Schatz ducked underneath Schuchart and powered ahead.

Schuchart didn’t get rattled though, and as the duo navigated a slower car in turns three and four coming to seven laps to go, Schatz got trapped behind the traffic and Schuchart cruised back to the top spot.

Disaster nearly struck for Schuchart with just five laps remaining as he approached Brady Bacon to put him a lap down when Bacon’s car had an issue. He slowed on the backstretch right in front of Schuchart who got stuck trying to get around him allowing multiple cars by.

In a swing of good fortune, the yellow flew for Bacon slowing before a lap could be completed, gifting the top spot back to Schuchart.

The final few laps provided an exciting game of cat and mouse as Schuchart chose to slide himself in each corner, protecting his lead, while Schatz ripped the cushion. Schatz got a run out of every corner and kept the gap within half a second as the laps dwindled, but ultimately Schuchart found enough grip sliding from the bottom to the top each lap and held on for the victory.

“I didn’t know where he (Schatz) was going to go,” Schuchart explained. “I felt like he was faster than I was. I felt like the lapped car kind of helped me get the lead, kind of took his line one lap, and I was able to sneak back by… When the caution came out, I got the race track back to myself, and I just tried to make myself as wide as possible. It was fast on the bottom, and I tried to kind of slide myself.”

Schatz finished just four-tenths of a second behind Schuchart, with Reutzel completing the podium.