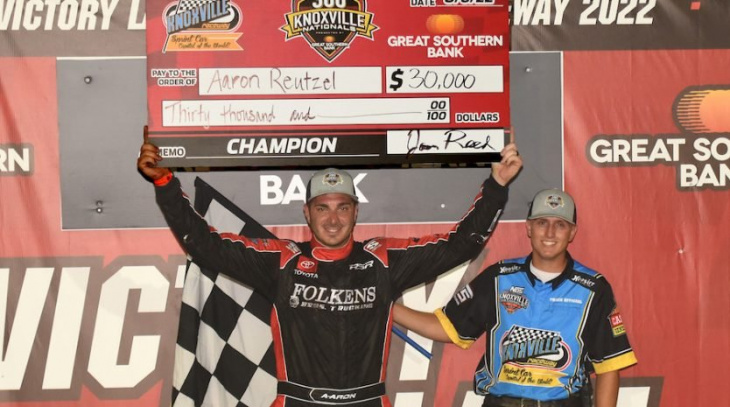 With a $15,000 prize, and an equal amount of lap money, the Clute, Texas, native took home $30,000 for his drive aboard the Ridge & Sons Racing No. 8. Reutzel bested fellow Texas native, Sam Hafertepe Jr., who closed late.

Reutzel started outside row one and stormed away early to lead Lynton Jeffrey, Clint Garner, Brian Brown and Terry McCarl in the 30-lapper. Hafertepe had moved from his seventh starting spot into the top five by the fifth lap.

Reutzel built his lead over Jeffrey as the laps ticked on.  Meanwhile, Hafertepe was also finding his stride.  A slide job by Brown gained fourth on lap 13, and a similar move in the same spot on the next circuit saw contact between Hafertepe and Garner.  Both veteran drivers managed to soldier on, with Hafertepe gaining third.

Reutzel was into lapped traffic at the halfway point, and Hafertepe worked by Jeffrey to move into second. The last ten laps saw furious racing between Jeffrey and Garner for the last podium spot. They traded the position five times in the last 10 laps.

Hafertepe cut a 2.5-second disadvantage to under a second in the late stages. Reutzel would win in track record time (9:03.9) over the 30 laps. Hafertepe settled for second, ahead of Garner, Jeffrey and McCarl. 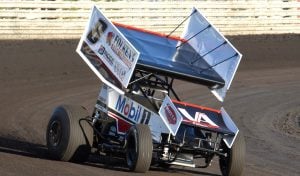 “We were struggling at the end,” said Reutzel.  “I knew probably someone was coming, but that’s how I wanted the race to play out.  I wanted to go green to checker, so I could run in lapped traffic and try to hide a little bit.  We were able to get up front and make the best of it.  It all worked out good.  By the time you get to the A main, there’s a good field of drivers, and no yellows.  That was great.  It’s been a fun year (staying close to home) and race the schedule I want to race.  It’s huge for our team to win this.”

“We could have used a caution or anything,” said Hafertepe.  “(Reutzel) drove a pretty good race and got through lapped traffic really well.  When you get out front at this place…sometimes clean air is the best place to be.  We had a really good racecar.  We passed a lot of good cars to get there.  I got into Clint, which I didn’t mean to.  I was hitting a little patch of moisture and I missed it and got up into him.  I didn’t want to race him like that.  Hat’s off to my guys.  They gave me a really good race car to drive.”

Tyler Courtney won the 18-lap B main, and Kaleb Johnson claimed the C main.  The D main saw much attrition and carnage. Seth Brahmer and Ryan Bowers were involved in a scary accident on the front stretch that required fence repair.  On the restart, a six-car pileup brought things to a stop again, with Rusty Hickman, Randy Miller, Tony Rost, Ben Brown, Clayton Christensen and Sam Henderson involved.   Justin Sanders emerged victorious in the D, while Jett Carney won the E main.

Randall secured $500 from Jetco as Rookie of the Year, while Cody Hansen took $500 from DGRD for “Best Appearing Car.”