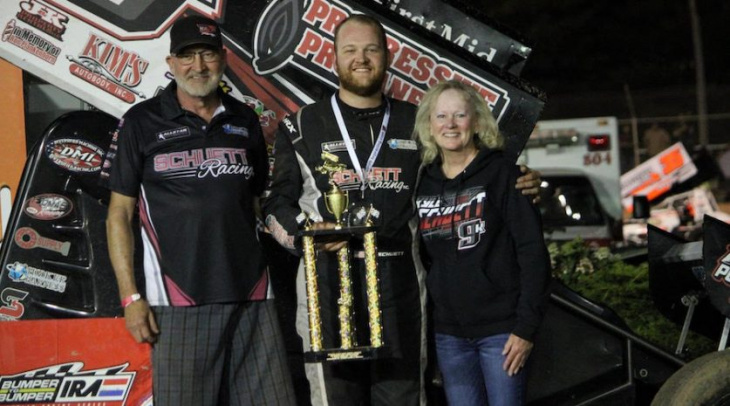 Schuett, who started his open-wheel racing career in midgets and moved to winged sprint cars in 2019, earned his victory competing with the IRA Sprint Car Series.

Schuett qualified second and won the dash to earn the pole for the 30-lap feature. He took the lead at the green flag.

“I wanted to get a good jump on the field and just get to clean air,” Schuett said. “I knew when I got out front that we had something special in the car. It handled like an absolute dream.”

However, lapped traffic provided a significant hurdle for Schuett.

“Once I got to traffic, my inexperience kicked in.” Schuett admitted. “I was trying to be as cautious as I could, but I knew Tyler [Tischendorf], Scotty [Neitzel] or someone else would be all over me if I didn’t make any moves. Fortunately, most of the slower cars were on the bottom of the track and I could clear them pretty easily, but [Kris] Spitz was just as fast as me on the top. I never really had a chance to slide him cleanly, and even when I could have forced the issue, I didn’t want to ruin both his race and mine so I just settled in and tried to make good laps.”

Schuett remained patient and held off a late charge from Danny Schlafer to secure the victory.

“I was all about just keeping it smooth against the curb and trying not to scrub off any speed.” Schuett said. “I saw [Danny] Schlafer down there once but knew if I just kept it straight and pinned on the top, I could win it.”

Schuett romped under the checkered flag, a first-time winner.

“I was so thankful that Danny [Schlafer] raced me clean.” Schuett said about the fight to the finish. “A lot of guys would have doored me for the win but these IRA guys are some of the cleanest drivers I’ve ever raced against.”