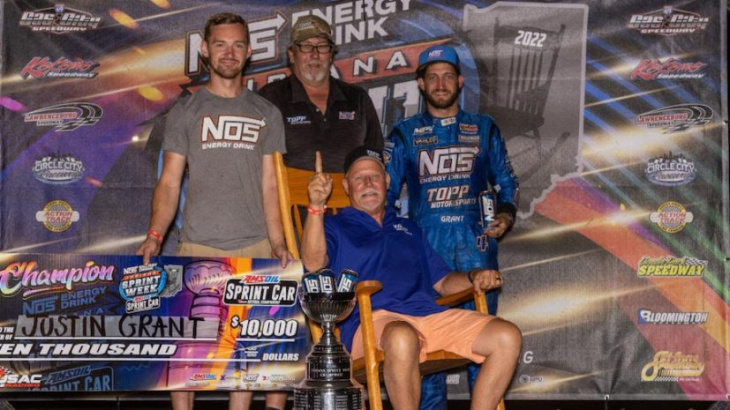 A myriad of close calls has marked Grant’s ISW career, including in 2020 when he led the standings entering the finale, but saw it slip through his fingers.

Grant was adamant, and made it abundantly clear from the outset, that Indiana Sprint Week 2022 was going to be dictated on his terms and his alone.

“It feels incredible to finally get it done,” Grant exclaimed. “To add my name to all the huge names on that trophy, it feels like my name is a little out of place on there, but I’m happy to have it. Hats off to the guys. It’s a long week and it’s a lot of work. I can’t say enough good things about (crewman) Dylan Cook. He works his tail off for me and 99 percent of the time, it’s just him and me on the car. He’s got a big, big workload and he handles it incredibly well.”

Grant was the only driver to finish in the top-five of all six Indiana Sprint Week features, while picking up a single victory at Kokomo Speedway.

Grant took a level-headed approach to all scenarios when finding himself on the mountaintop or dwelling in the valleys throughout the rigorous and grueling week.

“In the past, I’ve tended to fall apart in these deals when the going got tough,” Grant admitted. “I’ve worked really hard on that and tried to be more prepared this year than I’ve been in the past and I feel like it’s paid off.”

Meanwhile, longtime car owner Kevin Birchmeier of TOPP Motorsports has also been on the waiting list for several years, coming close to the Indiana Sprint Week brass ring with Tyler Courtney initially followed by Grant since 2018.

Birchmeier has weathered the storm and pounded up and down the road. As a result, the Rochester, Indiana car owner earned himself a seat in the coveted John Youngs-designed rocking chair, which has been a longtime tradition of the event and is presented annually to the Indiana Sprint Week entrant champion.

It wasn’t all smooth sailing initially for Grant, however. During a couple of nights throughout Indiana Sprint Week, the task required Grant to overcome being buried somewhat deep in the field. His Circle City charge to the second position came from a starting spot of 12th.

Likewise, his Lincoln Park run to fifth came from even deeper, back in 14th.

The perseverance of those performances was substantial in Grant’s and TOPP’s pursuit of the crown.

“We had a good week, but it wasn’t without hiccups,” Grant acknowledged. “We buried ourselves a few times and had to come from deep a few nights, but our car was just so good all week, we were able to dig out of those holes when we did get in them. Dylan and I have been working really well together and we found a package that we really like and can work with.”