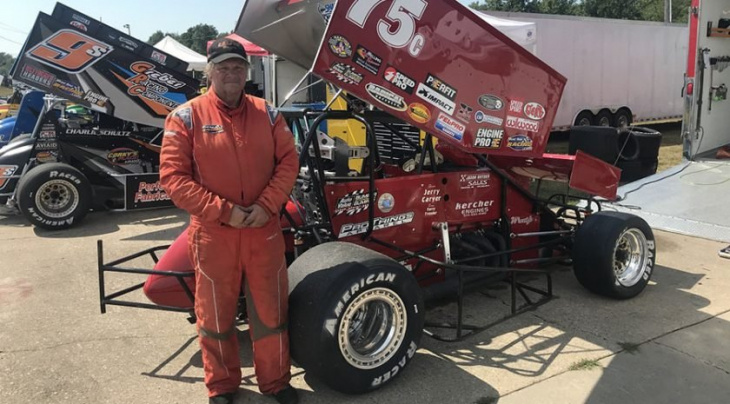 HOLLY, Mich. – Saturday’s Must See Racing Engine Pro Sprint Car Series headliner during the Bob Frey Classic at Lorain Raceway Park will be a meaningful tribute to a long-time and departed supporter of the winged pavement sprint car tour.

The 40-lap feature at the 1/3-mile oval will be named in honor of late veteran driver Jerry Caryer, who passed away unexpectedly on Aug. 15, 2020, just hours before he was scheduled to compete in a Must See Racing event at Lorain.

In the middle of a 45-year career in racing, Caryer began transitioning from dirt to pavement sprint cars in 2000 before moving exclusively to pavement racing in 2005. He ran parts of every Must See Racing season from the tour’s inception in 2010 until his passing two years ago and finished as the runner-up in series points in 2016 – his best showing with the traveling circuit.

“I had a lot of fun racing and that’s what it’s about for me,” Caryer said just two weeks before his passing, ahead of his final Must See Racing start on Aug. 8, 2020, at Wisconsin’s Golden Sands Speedway. “That was always my goal, to keep racing as long as I’m having fun.”

Caryer finished sixth in that final race, one of his best results in several years with Must See Racing.

His hometown of Ney, Ohio, is just two hours west of Lorain Raceway Park, making this weekend’s Bob Frey Classic the perfect event to honor Caryer’s legacy and career at.

“There isn’t a day that goes by that we don’t miss Jerry Caryer and the impact and perseverance that he brought to our pit area,” reflected Must See Racing founder and owner Jim Hanks. “He was one of the fiercest budget racers that I had the pleasure of watching and, even if he had to stretch a few dollars to get from race to race, you knew any time he was in the pit area that he was going to give it everything he had that night to earn the best possible finish that he could.

“I was looking around the pits during our last race at Berlin (Raceway) and got a little choked up thinking about Jerry,” Hanks added. “I know he’d be proud to see how the series has continued to grow over the past few seasons and would be right here alongside us, still having fun, if he could be. This weekend’s race is in his memory and we hope to put on an entertaining show in his memory and for all those that we’ve lost over the years.”