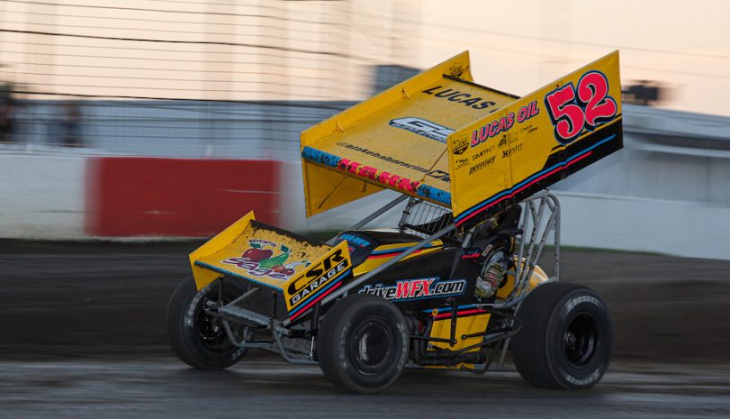 KANSAS CITY, Kan. — Leading the only lap that mattered, Blake Hahn made up a nearly 2.5-second disadvantage over the final five laps to steal the victory from Matt Covington in the Marmon/Keystone Road to Knoxville at Lakeside Speedway on Tuesday night.

“We really needed this win. We’ve had some strong runs, but it’s about being in victory lane,” Hahn said. “We came in with a car that’s been fast the last few nights out, just needed to rein in my mistakes and take advantage of those chances to win, and tonight was the night. My crew had this thing fine-tuned. Dalton had it where I could run the top or the bottom.”

Hahn’s 17th career victory with the Lucas Oil American Sprint Car Series and first of the season, made him the seventh different winner in as many tour appearances at the Kansas City oval and the 12th different winner this season. The win also put Blake back atop the points by nine.

On stoppage working lap five, Hahn restarted fourth as Covington led the way. Taking over the runner-up spot on lap 14, Hahn began picking through lapped traffic with Covington able to maintain nearly straightaway over the Sage Fruit, Co./CSR Garage No. 52.

Down the closing five revolutions, Covington found his advantage dwindle slightly as he fought with traffic.

Getting clear of the slower cars, the field raced around to two laps to run. Still trailing by over a half straightaway, Hahn worked low to three and four and rolled a diamond through the first and second turns.

Closing the gap to the white flag, Hahn again turned top to bottom through turns one and two with a massive run to turn three.

Entering on Covington’s back bumper, the No. 95 crept up as they rounded the fourth turn, exposing the low line to Hahn, who rotated through and powered by for the win.

Covington settled for second, with Brandon Anderson posting his second career podium finish. Battling back and forth with the No. 55b for several laps, Jason Martin ended up fourth, with Ryan Timms moving from ninth to fifth.