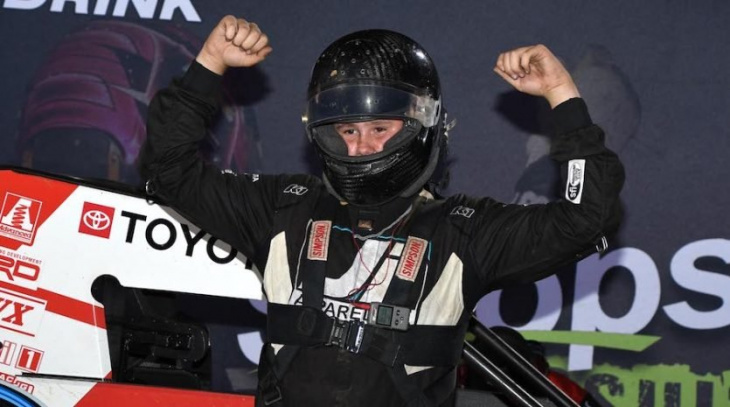 SPEEDWAY, Ind. — Dominic Gorden led wire-to-wire for all five segments to win the Stoops Pursuit race for the USAC NOS Energy Drink Midget National Championship on the opening night of the Driven2SaveLives BC39 Presented by WeatherTech at The Dirt Track at Indianapolis Motor Speedway.

The 16-year-old’s first ever IMS experience was punctuated with his first ride aboard Keith Kunz/Curb-Agajanian Motorsports’ Eibach Springs-sponsored Bullet By Spike powered by a Speedway Toyota.  Gorden started up front and stayed up front throughout the distance with little resistance.

The objective of the Stoops Pursuit is fairly straightforward — don’t get passed and don’t be involved in an incident in which you stop. Gorden thwarted what threats did come his way as the USAC series rookie officially put his name in the record books as a winner on the grounds of IMS.

“I was pretty nervous going into it,” Gorden acknowledged. “But after we got past the first and second yellow, I got a little more comfortable with every green flag run we got.”

After a relatively brief, but heavy shower earlier in the night, Gorden earned his way into the Pursuit after collecting a heat race win. When the time came to put up, Gorden stuck his No. 71k on the bottom and kept the 25-car field at arm’s length throughout.

“I didn’t try too many tricks,” Gorden noted. “I had to switch up my restarts a little bit and not miss the bottom.”

Gorden’s first and foremost challenge was trying to keep it clean for 25 laps without a hiccup from either himself or the field bearing down on him. However, that sure wasn’t quite the case behind him.

Any driver involved in a caution was subsequently eliminated from the contest, spelling doom for heavy hitters Justin Grant, Thomas Meseraull and Chance Crum on the initial start. Kyle Larson, the winner of the last two Stoops Pursuits in 2019 and ’21, plowed into the still Crum’s left front wheel, ramping over it with his left front wheel.

Entering the last five-lap segment, it was go time. Second-running Trey Gropp made his bid for the lead, pulling even with Gorden on the bottom at the entry to turn three on lap 22, to no avail. Zach Daum, who sat fourth for most of the duration, swept by his Bundy Built Motorsports teammate Mitchell on lap 23, then tracked down Gropp and overtook him at the exit of turn four coming to the white flag.

By then, it was too late. Gorden had firmly established his dominance at the start and finished off an impressive victory. Of note, Gorden, who made eight USAC National Midget feature starts earlier this season with CB Industries, had only once finished inside the top 10.

Ten heat races were held earlier on Wednesday evening with teammates Chris Windom and Mitchel Moles tied for the number one position for the BC39 event points, earning 160 points each for their eighth to first runs during their respective heats. 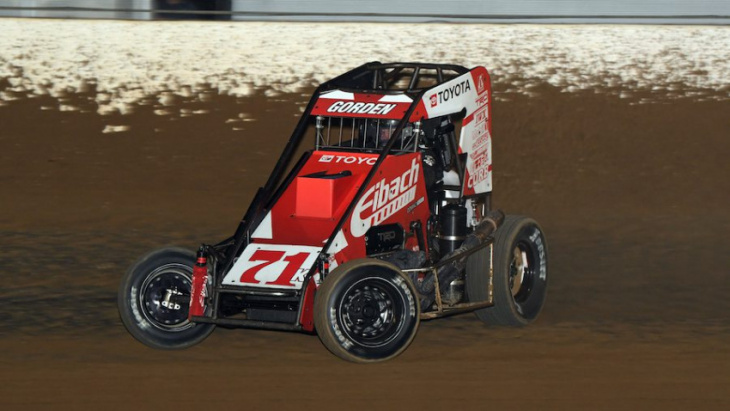