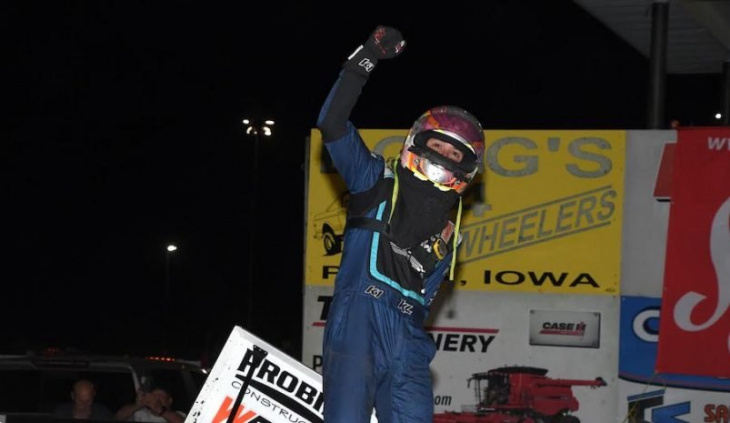 OSKALOOSA, Iowa — Another August, another Kyle Larson victory in the state of Iowa.

For the second year in a row, the Elk Grove, Calif., native claimed Southern Iowa Speedway’s Sage Fruit Front Row Challenge and earned a $21,000 payday for his efforts.

With the victory, Larson joined Daryn Pittman and Sammy Swindell as the only drivers with three wins in the event. All three of Larson’s triumphs have been in the last four editions. The defending NASCAR Cup Series champion also became just the third driver to earn back-to-back Front Row Challenges and the first since Brian Brown in 2013 and ’14.

Parking in victory lane required a charge from the third row in the 30-lap main event, but it was one Larson knew he could make as soon as the green flag waved.

“My car just felt extremely good,” Larson said. “I didn’t do a great job on the start, but I could instantly tell that we probably had the car to beat.”

Leading the field to green were Carson Macedo and Anthony Macri thanks to their athleticism in a unique King of the Hill competition that featured a foot race.

Macedo nailed the start from the pole and pulled away in the early laps as Larson looked to begin his charge early, battling with the likes of J.J. Hickle, Pittman and Brown in the opening laps.

Before halfway Larson had advanced to third and began to reel in Macri, while Macedo expertly navigated traffic ahead of them.

Larson sliced past Macri in traffic to claim the runner-up spot, but just a few laps later a slower car held him up allowing Macri to reclaim the position. A similar fate found Macri as traffic took his line, and Larson slipped back by on the bottom before setting his sights on Macedo.

The Jason Johnson Racing driver held a decent lead when Larson moved into second, but traffic again proved troublesome for a contender as Macedo lost momentum out of turn two and Larson pounced on the opportunity.

As the lead duo entered turn three, Larson threw a slider and cleared Macedo, but Macedo quickly reacted by powering under Larson in the middle of turns three and four and sliding in front of Larson.

Exiting the corner, Larson dipped underneath Macedo and cleared him as the two screamed down the front stretch with 10 laps remaining. As Larson went to the cushion in turn one, Macedo took a peek to the low side but couldn’t get in front and Larson charged ahead out of turn two.

“As I caught Carson I got a good run off of (turn) two, and I was able to slide him,” Larson explained. “I knew I needed to get gone because getting battling with Carson gets tough, and then the rest of the pack will be coming behind you.” 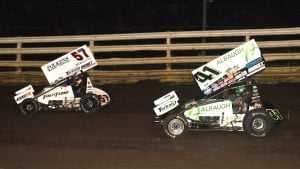 As the final laps faded, Macedo was able to keep Larson within striking distance but couldn’t ever get close enough to make a final bid at the win. Larson took the checkered flag with roughly a five-car-length advantage.

In what may signal trouble for the competition, Larson commented in victory lane that he hadn’t quite been comfortable and as fast as he’d prefer in the sprint car recently, but he, Paul Silva, and the entire team clicked tonight with the Knoxville Nationals on tap as he looks to repeat victory in sprint car racing’s biggest event.

“I finally felt really good there,” Larson said. “I’m excited about Knoxville Nationals now and feel like we have a shot to win.”

Macedo and Macri completed the podium.