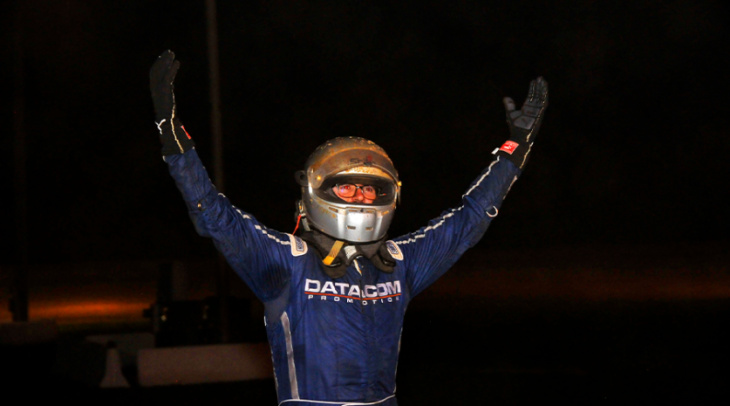 Polesitter Scotty Weir, the defending track sprint car champion and current point leader, led the first 10 laps of the 25-lap sprint car feature. Except for the first two laps, Adams, who started fourth, was right behind him in Scott Adams’ black Spike No. 5X.

Adams passed Weir for the lead on lap 11 and led through lap 18, but then the plot thickened. 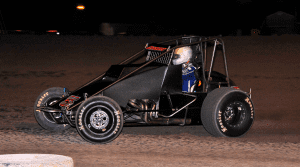 Adams on his way to victory. (Randy Crist Photo)

Colin Grissom spun at the top of turn 4 with 18 laps down to bring out the race’s first yellow flag. Before another lap was complete Jack Hoyer spun in turn 2, and Sterling Cling got very high off turn 2 but kept going.

On the restart working lap 19 Weir passed Adams low in turn 2 for the lead, but seconds later three cars collided on the backstretch with a fourth one flipping to bring out a red flag.

It all started when Anton Hernandez, who was fourth at the time, had the uneasy experience of getting sideways on the backstretch in front of the rest of the field. Brayden Clark and Kyle Shipley couldn’t avoid him.

Brandon Morin didn’t have anywhere to go either, and he flipped. Morin suffered an ankle injury but was not transported to the hospital, while the other three climbed out of their cars under their own power.

Following the restart, Weir’s car biked and bounced badly in turn 2 on lap 20. Somehow he regained control, but he dropped from first to fifth during his wild ride. Adams regained the lead followed by Saban Bibent, Cole Bodine, and Colten Cottle.

On the next lap Bodine’s possible podium finish disappeared when he flipped in turn 4. He was disappointed but unhurt.

That moved Weir to fourth place, and he passed Cottle on lap 23 for third. The checkered and the yellow waved simultaneously when Travis Hery spun between turns 1 and 2 on the last lap.

Bibent, who started sixth but ran in second or third place for all but the first two laps, recorded his best finish of the season when he took the checkered flag in second place, 1.852 seconds behind Adams.

The 17-year-old high-school student was driving the Wedgewood Motorsports Triple X No. 98.

Weir finished third in Scott and Donna Pedersen’s  No. 4P.

Cottle placed fourth in the Paul Hazen No. 57.

Bill Lewis rebounded from some bad luck a week ago to win the 15-lap street stock feature, and Landon Arcaro snagged his fifth 15-lap Gas City hornet feature victory of the season.