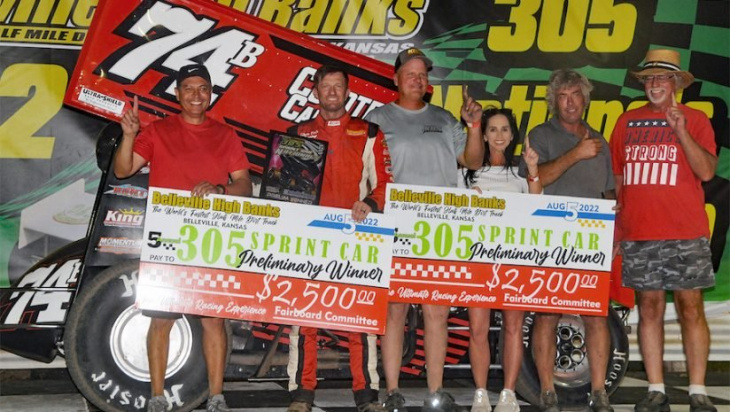 Carney swept into the lead on the high side of the track on the 12th round and kept the dicing trio of Luke Cranston, Zach Blurton and Steven Richardson at bay the rest of the way to snare the $2,500 winner’s share aboard the Coyote Candle Company No. 74b sprint car.

Carney was holding down the third position on a lap ten restart precipitated by a red flag for Boyd Peterson’s ride along and then up-and-over the turn three and four guardrail.

Carney made quick work of the lead duo as action resumed and went on to secure the United Rebel Sprint Series-sanctioned win.

“We didn’t make any adjustments under the red flag,” Carney explained. “I felt like we were just starting to get really good right before the red. The track really didn’t change, the car just kept getting better as the race went on, we were just a little too tight to begin with.”

Defending Belleville 305 Sprint Car Nationals champion Cranston led the field to the green flag with Carney alongside. But it was third-starter Richardson racing into the lead in the opening pair of corners and setting the pace ahead of Cranston and Carney in the early going.

Cranston began to move in to challenge after a handful of laps and slid past Richardson in turn two for the point on the 10th round with Richardson making a counter-move only to have the red flag appear.

Richardson led just two more laps before Carney raced past both he and Cranston en route to victory lane.

Cranston settled for runner-up honors, explaining that, “I don’t think we had anything for him (Carney), he found the top before I did and it was too late then.”

Blurton picked off a pair of positions after the red-flag stoppage to fill out the podium third as Richardson settled for fourth with Stu Snyder advancing a handful of positions to round out the top five.

After Jeff Stasa established the quickest overall lap of 17.584 seconds in qualifying.