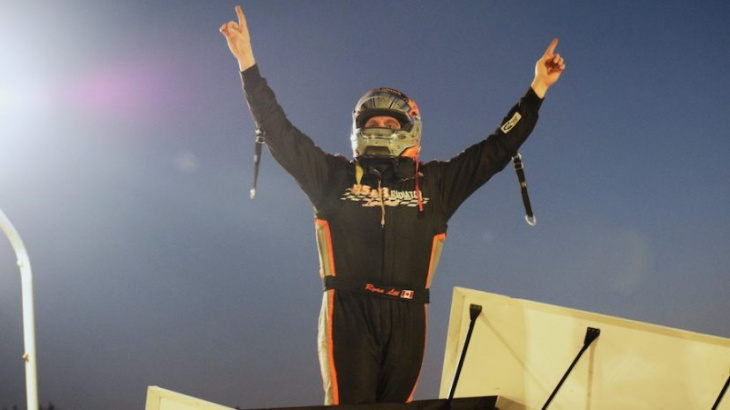 The native of London, Ontario, roared from 10th starting spot to take the lead on lap three, then held off every advance made by a determined Jason Blonde in the second half of the 30-lap Engine Pro Fast Car Dash main event en route to his second Must See Racing-sanctioned victory.

It was the first time Litt stood in victory lane with the series since March 22, 2013, when he won at Five Flags Speedway in Pensacola, Fla.

“Fast time, start 10th and win the race – how about that?” a jubilant Litt told the standing-room-only crowd in victory lane. “We tried something new with the setup the last few weeks and it was just terrible. Tonight we decided to go back to our old notes and it was the best this car had run all year.

“From the first lap of practice today, I knew I had something for them,” Litt added. “It’s amazing to finally win again in the caliber of field that Must See (Racing) and Jim Hanks bring to the track each week. I’ve won a few races in the past, but this is definitely one of the sweetest victories we’ve had.”

After a roll of 10 on the inversion die placed past Must See Racing rookie-of-the-year Rick Holley on the pole, a chaotic opening lap saw National Sprint Car Hall of Famer Jeff Bloom surge from the outside pole into the lead before a multi-car accident on the frontstretch forced a yellow flag with one lap scored.

The incident saw Tom Jewell slap the outside wall exiting turn four before his blue No. 7 came down the track into the orange No. 48 of Jacob Dolinar, who spun to the bottom of the first turn in a cloud of smoke and was unable to restart – a broken frame ending his race prematurely.

When racing resumed, Bloom held serve briefly at the point before Litt came soaring forward, moving from third to first on the third lap before running out to as much as a four-second advantage just before halfway.

A lap-14 caution for debris did little to slow Litt’s roll, as he charged back away from the chasing No. 42 of Blonde on the restart. Instead, it was late lap traffic and a yellow with five laps left that gave Litt a scare.

A shredded tire on the rear of championship leader Charlie Schultz’s No. 9s forced Schultz to stop high in turn four from third place, putting a dent in the Ohioan’s title hopes and setting Blonde up with another chance at Litt in the closing moments.

However, Litt held serve – both on that restart and the final restart of the night following a Bobby Komisarski spin in turn two – leading the final five circuits comfortably en route to a 1.681-second win.

Blonde settled for second and admitted afterward that he burned up his equipment trying to catch the leader as the laps wound down.

“I just wore out the tires trying to get to him,” the Litchfield, Mich., native said. “It was a heck of a battle, though. He raced me hard, and it was all really clean. You love to be part of nights like that.”

Joe Liguori finished third and cut his deficit to Schultz down to a single point with two races remaining in the hunt for the season title. Rick Holley was a career-best fourth and Schultz rallied back for fifth.