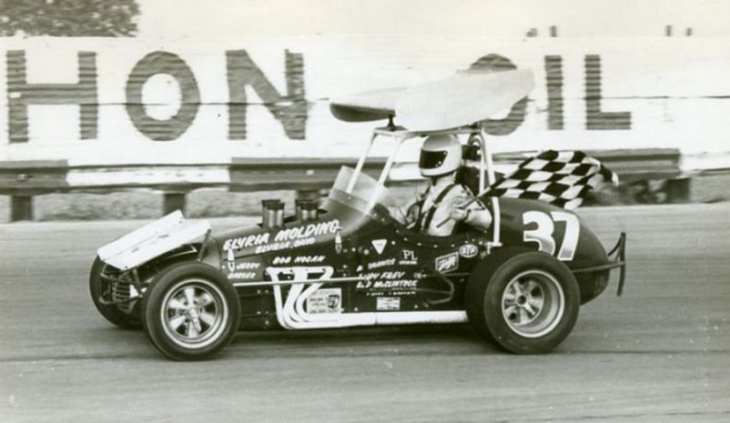 HOLLY, Mich. — Saturday night’s Bob Frey Classic at Ohio’s Lorain Raceway Park will be a fitting festival of speed for its illustrious namesake.

The event at the one-third-mile paved oval, headlined by the Must See Racing Engine Pro Sprint Car Series, pays homage to legendary sprint car driver Frey. A native of nearby Elyria, Ohio, Frey was inducted into the National Sprint Car Hall of Fame & Museum in June, and his accolades are nothing short of stellar.

“It’s fitting that this race will be at Lorain,” Frey told the Wickenburg Sun in February, shortly after news of the Bob Frey Classic was first publicized. “I started racing there in 1970 and, in those days, you had to be 21 [to race] or have your parents sign a waiver. I was only 20, but my dad was all for it.

“My mom was reluctant to sign that waiver … I remember going out there as a six- or seven-year-old kid watching the races with my dad. I was surprised [when the race was announced], but I’m very pleased with it all,” Frey noted. “Having an inaugural Bob Frey Classic at the track I started out [racing] at in my hometown? That, in itself, is another honor.”

Once Frey transitioned to the supermodified and sprint car ranks, he quickly became a force to be reckoned with, thanks to local Ohio car owners Ernie Ensign and Urbie Durnwald.

However, Frey is most known for his stint driving for fellow Hall of Famer Glen Niebel in Niebel’s iconic yellow No. 20 machine.

Together, Niebel and Frey won the sprint car portion of the Copper World Classic in 1981, ’82, ’85 and ’87; four consecutive Little 500s from 1987-’90; and nearly every major pavement sprint car event that the sport had to offer during the decade.

They teamed together for 13 years before Frey retired from racing after the 1993 season to focus on his business pursuits — most notably, owning and operating two Arizona mortuaries for many years.

Becoming a funeral director or mortician was something that Frey had looked into shortly after he first began racing, but his eyes were set on the Indy car circuit — now the NTT IndyCar Series — at that time.

After failed attempts to qualify for the Indianapolis 500 in both 1981 and ’82, Frey returned to sprint cars and proceeded to build a Hall of Fame resume over the 11 years that followed.

“In my early 20s, like so many people did and still do in that world, I had dreams of becoming an established Indy 500 driver,” Frey recalled. “When I knew that Indy car racing [opportunities] wouldn’t materialize like I hoped for, I went back to mortuary school, studied, and became a mortician.

“Everybody said, ‘I can’t believe you’re going to be a mortician,’ and I used to joke that I’d pass out some business cards to those guys … and maybe it would make them lighten up on the right foot a bit.”

Now, after some time away, Frey will return to the racing world this weekend to serve as the grand marshal for the race named in his honor. He’ll participate in a pre-race meet and greet, sign autographs for fans and participate in the night’s post-race trophy presentations.

Must See Racing will also donate $500 to Steadfast for Veterans, a non-profit organization which provides housing for veterans in need that supports the winged sprint car tour, in Frey’s honor.

“This weekend’s Bob Frey Classic will showcase the best pavement sprint car drivers from across the country, and for many years, Bob Frey was considered one of the best pavement sprint car drivers that the sport had to offer,” said Must See Racing Founder and Owner Jim Hanks. “To have Bob join us for the event this weekend, signing autographs for the fans, is an honor and will help to enhance what we hope will be a spectacular night of racing and fan entertainment at Lorain Raceway Park.”

For more information on Must See Racing, visit the sanctioning body’s website at MustSeeRacing.com.