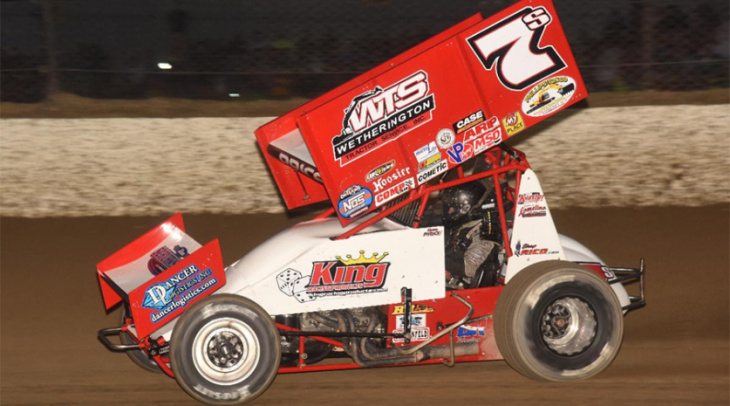 KNOXVILLE, Iowa (Aug. 9, 2022) – The 61st annual NOS Energy Drink Knoxville Nationals presented by Casey’s is on tap for Sides Motorsports, which will feature a two-car team this week.

Robbie Price competes on Wednesday during the opening preliminary night and Tim Kaeding will be part of Thursday’s preliminary action at Knoxville Raceway. The event concludes on Saturday with the feature.

“I’m looking forward to being a part of the Knoxville Nationals with Sides Motorsports,” Price said. “It’ll be good to have two cars running this week and to get to work with TK. We both got a night in on Sunday during the Capitani Classic to be more prepared heading into our prelim nights.”

Both drivers made progress at the half-mile oval on Sunday during the 11th annual Capitani Classic. Price timed in 30th quickest in his group before advancing from 10th to eighth in a heat race and from 18th to 16th in a B-Main.

Kaeding qualified 22nd quickest in his group. He then rallied from eighth to fourth in a heat race and from 13th to ninth in a B-Main.

Price also competed last weekend at Federated Auto Parts Raceway at I-55 in Pevely, Mo., during the Ironman 55. He qualified inside the top 10 in his group and placed fourth in a heat race to lock directly into the World of Outlaws NOS Energy Drink Sprint Car Series main event each night.

“The track was pretty tricky and we lost some ground in the feature,” he said. “Once I got lapped I didn’t want to risk tearing up the equipment so I pulled in early. It was similar on Saturday knowing we had a busy weekend with traveling and racing on Sunday at Knoxville. Sometimes it’s best to be conservative on your equipment on nights when you aren’t moving forward.”

Price was credited with a 19th place result on Friday and a 20th place showing on Saturday.