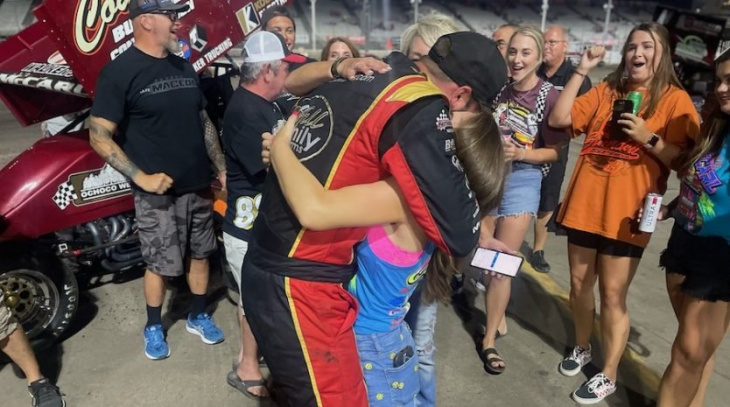 KNOXVILLE, Iowa — Austin McCarl wasn’t entirely sure why his father, Terry, ran up to his car full of emotion as he exited the track following a fourth-place effort in Thursday night’s preliminary feature for the 61st Knoxville Nationals.

Once he learned the reason, Austin couldn’t hold back his own tears of joy.

The Altoona, Iowa, native had just secured the pole for the biggest race of the sport he’s grown up in his entire life. A race that takes place not even an hour’s drive from his home.

“I don’t know how to feel, man, I don’t know,” said a choked up McCarl. “I was happy to run fourth there from seventh. My dad came running up the scales and I wondered why because I knew running fourth we didn’t have to tech anything. He said that he thought we were on the pole and had a little tear in his eye. I didn’t really believe him, man.

“I’ll never forget it,” McCarl added of the moment with his dad.

Family is the entire fabric of McCarl’s racing operation in the Country Builders Construction car, making the celebration all the more special.

“I’m just proud for my team, my family, and my name,” McCarl said, voice still shaky. “We’re just doing this as a family. We don’t have any fancy pants mechanic or anything. It’s just usually me, my brother, my uncle, and Gage in the shop every week just working away on these things, and to be rewarded like this is pretty special. This is the toughest race in the world and may never happen again so we’re just going to soak it all in and enjoy it.”

Adding yet another layer to the familial significance and emotion of the moment is the team’s biggest supporter, Country Builders Construction, has ties to the family.

Operated by the Offill family, the name has ridden on the side of McCarl wings for decades, and Austin followed in his father’s footsteps by putting the wine-red machine in a good spot on the sport’s biggest stage. Terry McCarl is a 22-time Nationals finale starter and Saturday will mark Austin’s third start in the big event.

And just in case this already perfectly storybook moment needed another page, Austin and his wife, Alyssa, announced yesterday morning that their family would be growing soon as they’re expecting their first child.

As far as the path to earn the pole, McCarl pieced together a smooth night, making the most of every lap he had on track.

He timed in fifth quick. The heat race saw him charge from eighth to fourth, claiming the 10-lap tilt’s final transfer to the feature. And in the main event he rolled off seventh in a good car, picked his spots and brought it home in the top five.

“I felt like I could’ve went anywhere on the race track that I wanted to,” McCarl explained. “I just kind of got plugged in there on the bottom early on, and guys would miss it, and I knew it was good down there and if I could hit the exit of (turn) two, I could make a good straightaway.

“I just didn’t feel too comfortable on the top,” McCarl continued. “I didn’t feel like I could make the mile an hour up there you kind of need to take the long way around work… I don’t know. I don’t know what to think. I just went out there and raced.”

McCarl viewed the night as a result of the recent strides the team has made. 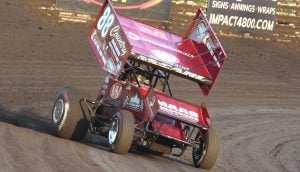 “We’ve been pretty up and down the last couple weeks,” McCarl explained. “At the Cappy I felt like I was okay, not great. We went to Oskaloosa, and I tried some stuff I was doing a couple years ago and felt pretty comfortable and was like, ‘screw it, let’s just go there (Knoxville Nationals) and run this, and it’s worked out pretty well.”

So, how does the kid from Iowa plan to celebrate?

“We’ll get to work tomorrow and probably run the valves a little hungover in the morning,” McCarl said with a laugh. “It’ll all be worth it.”

Fortunately for them, earning the pole also means sitting out Friday’s Hard Knox night and a full day to cleanse of any lingering boozy side effects.

Then when the sun comes up Saturday morning over the Marion County Fairgrounds, it’ll be show time.

McCarl still faces a long race to pursue a victory that would send the entire facility that’s never seen an Iowa driver win the Nationals into a frenzy.

And while his full focus will be on how to attack the grueling event, McCarl intends to allow himself to enjoy the moment as much as possible when he lines up on the pole for the main event with nothing in front of him but the famous black clay and a dream victory 50 circuits ahead.

“It’s an amazing feeling,” McCarl said. “I’ve shed a lot of tears. It’s just an amazing feeling. I think the four-wide will be pretty crazy, too, but then you got to lock it in and run the race… Firing off Saturday for A-main hot laps we’ll be ready to run 50 laps as hard as we can and see what happens.”