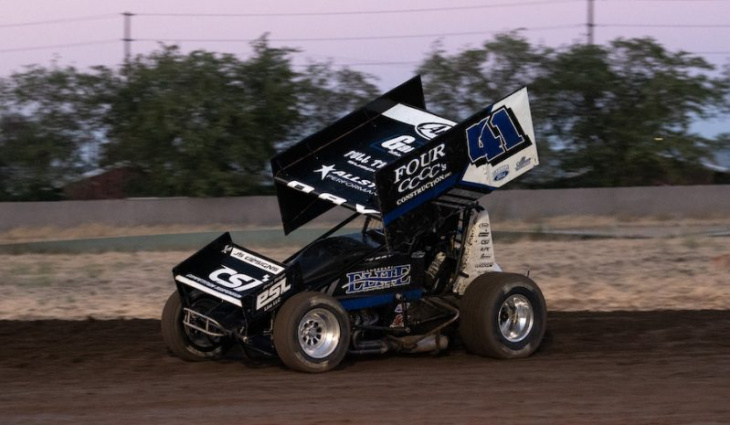 KNOXVILLE, Iowa — After the 25-lap feature during Wednesday’s Knoxville Nationals opening prelim, a visibly worn out but satisfied Corey Day stepped from his ride.

Day has spent a majority of the last year and a half competing on California’s bullrings against the top talent of the West Coast and often besting them. His early results showed the potential to join the ranks of elite sprint car drivers, so he and the Jason Meyers Racing team he drives for decided to expand their horizons with hopes of realizing that potential.

Earlier this summer, the Clovis, Calif., racer set out to better himself by racing in unfamiliar territory against some of the sport’s toughest competition. This involved driving at various midwestern venues, while placing a primary focus on Knoxville Raceway due to his plan to take on the Nationals.

After the Dirt Cup near the end of June, the No. 14 was hauled out east.

Over roughly the past month and a half, Day and the team have struggled to find results at the Sprint Car Capital of the World. Day has very little half-mile experience, but on Wednesday they put together a night that resulted in Day notching a top-10 in his Nationals prelim debut.

The evening didn’t begin quite the way they would’ve liked, but they continued to improve until ultimately finishing ninth in the feature — a result that Day believes could’ve been even better if it wasn’t for a lap-one caution.

“We actually didn’t qualify too great, but with the heat invert, I think there was a 40-car total invert, so I started outside front row for the heat and was able to get the win,” Day said. “From there we were 12th in points, so we started 12th in the main. I wish the first start would’ve gone. I think we were up to eighth or sixth or something, but it didn’t count. We still got ninth out of it so it’s alright.”

Day is slotted 13th in points with tonight’s prelim action still to come, so he likely won’t directly lock into Saturday’s main event.

However, the simple fact that the teenager may be lined up toward the front of the B-main with a chance to transfer is yet another testament to his and the team’s progress.

And speaking of the team, Day continues to heap praise on the trio of Jason Meyers, Preston Cross and H.P. Myatt who have helped him come this far, and he notes that they recently added another key team member.

“They’re all like my second dads,” Day said. “They worked on my dad’s (Ronnie Day) race car back in the day. They all care for me a lot, and it definitely makes it better that they put their heart and soul in the race car, make sure nothing falls off and everything is in tip-top shape.

“We’ve got Noisey (Shane Bowers) on board now,” Day added. “He’s Brock Zearfoss’ old crew chief. He’s definitely been a big help for us in getting us up to date with the way everything is back here. They’re all definitely a huge part of this whole deal.”

Like the rest of Wednesday’s competitors, Day must now play the waiting game as tonight’s action unfolds to find out where he’ll be positioned heading into the weekend.

After the Wednesday performance, Day is hopeful he can be among the 24 starters in Saturday’s 50-lap finale as he continues to turn heads and ascend the ranks of sprint car racing in just his second full year behind the wheel.

“It would be good to make the A-main,” Day said. “I don’t know exactly where we’re going to be, the B (main) or the C (main). Maybe we’ll get lucky nobody will pass tomorrow and we’ll make the A-main. We’ll see, definitely making the A-main is the goal.”