Macri showed the “Show-Me State” exactly why on Friday night by taking the $26,000 winner’s share in the All Star Circuit of Champions “Rayce Rudeen Foundation Race” atop the half-mile I-70 Motorsports Park clay oval.

“A win outside of PA is pretty badass, this one means a lot to me,” Macri commented in victory lane.

After leading the initial 15 circuits, Macri had to battle back past Rico Abreu to reclaim the point on the 19th round and then denied a late bid from Buddy Kofoid to secure his 17th overall win of the season and fifth in All Star Circuit of Champions competition aboard the J&S Classics/C&D Rigging No. 39m sprint car.

While Macri led the way to the green flag in the 26-lapper from the pole position, it was outside front row starter Parker Price-Miller leading the way through the opening pair of corners before Macri slid into the lead through turns three and four.

With Macri setting the pace, Abreu ran fourth for the opening half-dozen circuits before battling past both Price-Miller and then Kofoid by the ninth round.  Abreu reeled in the leader and was on Macri’s tailtank at the halfway point and then moved into the top spot by sneaking by on the low side of turn four to take command on the 16th round.

“I thought I was getting through lapped traffic efficiently and obviously I wasn’t,” Macri commented.  “I slipped off the bottom one lap and he blew the stickers right off my wing.  I really wanted this win, and the first win out of PA means a lot, I wasn’t gonna let him win easily so I got up on the wheel.”

Macri indeed elbowed up and slid back past Abreu on the 19thround and then after swapping sliders on the 20th circuit it was the Dillsburg, Pa., racer back in control. 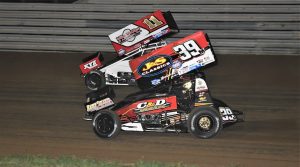 Following a quick caution with just four laps to go, Abreu’s strong run came to an early end a lap later when came to a stop on the frontstretch.  “It was something in the steering box, we’re not quite sure what it was yet,” the driver of the Rowdy Energy Drink No. 24 explained afterward.

Abreu’s exit moved Kofoid into second and he nearly took full advantage of it, pulling alongside Macri on the restart before “The Concrete Kid” pulled back ahead and win on to take the win.

“I didn’t get the right rear in the meat enough and started spinning tires down the straightaway,” Macri explained in victory lane.  “I saw Buddy poke his nose down on the bottom and I knew I had to get up on the wheel.”

Kofoid settled for runner-up honors aboard the Hi-Plains Building Division/Indy Race Parts No. 11k, describing the final restart with, “I followed Macri and kept my right sides kinda on the cushion and actually stayed with him better than I thought I would.  I thought this was my only shot, I ran the bottom in one and two early and it was pretty decent, I think my tires sealed over at the end.”

Making a late charge, Justin Peck filled out the podium in third aboard the Buch Motorsports Coastal Race Parts No. 13.

“We got to racing lapped cars and lost three spots real fast, luckily the restarts allowed me to make up for it,” Peck commented.  “The later stages of the race, this car seems to come to life.”

Price-Miller fell to fourth on the final restart with Hunter Schuerenberg advancing a handful of positions to round out the top five.