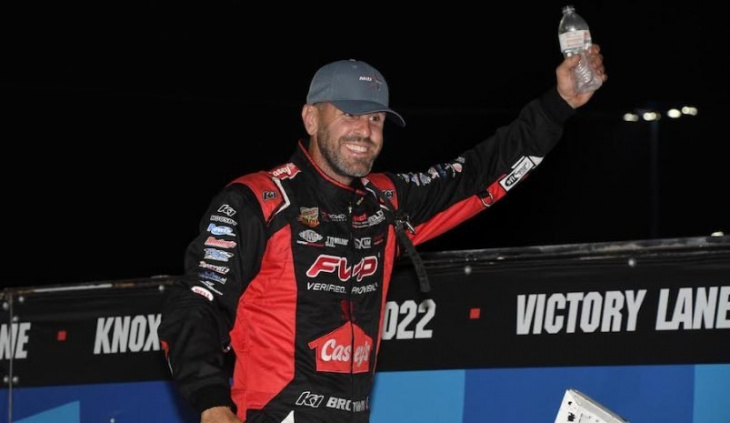 Lynton Jeffrey emerged as the high point man for both qualifying nights and will sit on the pole for Saturday’s championship $15,000-to-win event. Jeffrey was using a borrowed engine.

McCarl used the low side to gain third from Johnson on lap five.  Brown hit lapped traffic on the eighth circuit, but and incident involving Kelby Watt, collected Davey Heskin, who got upside down, and Kaleb Johnson.

The restart saw Brown leading Thram, McCarl, Johnson and Jeffrey.  Jeffrey worked by Johnson for fourth, and Clint Garner followed him into fifth at the halfway point. McCarl used the high side to get by Thram for second with six to go.

Brown was in lapped traffic with three to go and pulled away to win by over four seconds.

McCarl was second, Jeffrey gained third with two to go and was followed by Thram and Garner.

“It’s good to be here,” said Brown. “The 360 Nationals…the final night’s been good to us, but the qualifying night…we don’t seem to qualify well. We dig a hole and start deep. We should be in the first three rows (inside row three). I feel like if our car’s like this, if we do our job we can beat anyone in the world.”

“(Thram) did a great job,” said McCarl.  “I started finding the bottom there and got up beside him. We didn’t quite get there, and he took my line away from me. That’s exactly what I would have done with him.  It took a bit to get going. After that yellow, my tire didn’t want to take off and didn’t feel near as good as I did before the yellow.”

“It’s good news (being the high point driver),” said Jeffrey. “I can’t believe it. I didn’t even have a motor this morning. I didn’t know, but Jody Hegwood loaned us one (driven by Devin Kline). They were kind enough to take it out of his car and put it in mine for the night. It’s a really good motor. I’m pretty excited.  Sitting on the pole of the 360 Nationals is definitely a feather in the cap. We’ll just try and get it finished off.”