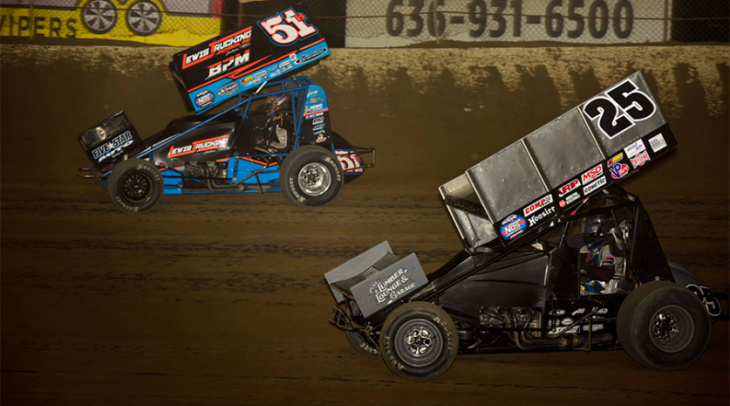 KNOXVILLE, Iowa — Earlier this year J.J. Hickle made a big decision to change the trajectory of his racing career by leaving the comforts of home. Heading into this week’s Knoxville Nationals that move appears to have paid off.

The Quilcene, Wash., native received an offer to wheel Brandon Ikenberry’s No. 25 sprint car with a primary focus on racing weekly at Knoxville Raceway and Hickle pounced on the opportunity.

“It’s one of those deals where they took a chance on me,” Hickle told SPEED SPORT. “And I uprooted my life and left everything I know and love at home in Washington and came out (to Iowa) and started driving for these guys.”

Much of Hickle’s previous experience came in the Northwest. The 32-year-old was a consistent force in the region and in 2021 he expanded his horizons resulting in a breakout season with the Lucas Oil American Sprint Car Series.

Hickle picked up five wins, second most on the ASCS tour, and finished the season an impressive runner-up in points in his rookie campaign.

Then came the call to drive for Ikenberry’s Deuce-5 Motorsports in an entirely new setting for Hickle, who had very little Knoxville experience prior to 2022. The tracks in the Northwest couldn’t be more different than the Sprint Car Capital of the World.

Naturally, with the transition came with some early obstacles.

“Honestly, we didn’t really do as well as we’d hoped right off the bat,” Hickle noted. “The first couple months were a lot of growing pains, a new team working together and all of us trying to get on the same page. Everything was just how it is with racing. Sprint car racing is tough. You go out and start racing against the toughest guys as far as local competition goes in the Midwest with a brand-new team and you’re going to run into some struggles.

“Knoxville is just a unique place,” Hickle added. “You go there and you think you’ve got a handle on it. We made the 360 Nationals in 2020, but it’s just a humbling place. There’s no substitute for laps at that place. I mean, everybody says that for everywhere, but with Knoxville, you’ve just got to do it to get better.”

After the early struggles, Hickle’s next eight races in Knoxville’s weekly action have seen him come away with with six top-10 finishes.

“With Brandon’s knowledge of the sport, I feel like those guys give me a pretty solid car every weekend,” Hickle explained. “We’re starting to work together well. We’re starting to find our stride now.”

Hickle flexed his muscle at the July 30th Tezos All-Star Circuit of Champions race at Knoxville. With a healthy field of 55 cars checked in, Hickle not only made the feature, but he finished a strong seventh, his first series top 10.

“That All Star race was really a good deal for us,” Hickle said. “A couple weeks before that we started clicking off some top 10s, and then it was nice to show that we can run with anybody when they come to our track.”

Hickle backed up the All-Star showing by making the feature at the Capitani Classic this past weekend against an even bigger field of nearly 70 entries and even more notable names.

Now, Hickle and Ikenberry have an opportunity to put their progress on display on the biggest stage against the toughest competition.

This week brings the 61st edition of the Knoxville Nationals, the centerpiece of the schedule for any team who commits to competing at Knoxville for a full season.

While the prestigious crown jewel of sprint car racing will be a great opportunity to showcase their strides, it will no doubt be their biggest test. With their recent results, though, Hickle feels confident heading into the Nationals as he continues to adapt to new territory.

“Obviously this time of year is one everyone has got circled on their calendar,” Hickle said. “We’re no different. You pretty much run Knoxville all year to try and get yourself ready for the Nationals. We’ve got pretty high hopes going into the Nationals. I’d really like to put this thing in the feature. That’s goal number one — to be able to run top 10 on our prelim night and put the thing in the show would be a win for our team.”