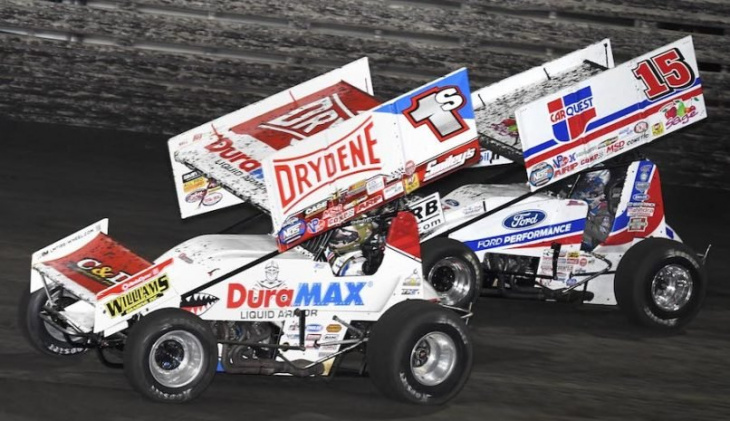 There was certainly no question that Wednesday night’s qualifying program for the 61st NOS Energy Knoxville Nationals was unusual and unlike any other in recent history of the prestigious event at Knoxville Raceway.

Only two of the top 20 qualifiers in heat races made it into the feature event, making for some odd folks running near the front of the feature and leaving point totals fair below normal.

Logan Schuchart, Donny Schatz and David Gravel finished on the podium, but all three said track conditions made it really difficult to pass, as evidenced in only Schatz and Gravel coming from row three or four of a heat race to transfer.

Schuchart qualified 26th, but transferred through his heat and started on the pole and led all 25 laps of the feature.

“The bottom was pretty greasy for a car length and a half and the middle out was pretty wide open fast and that made it really tough to pass,” Schuchart said. “Nowadays these cars are so fast and everybody is so good. Everybody is on the same page and so fast. It makes it tough to start eighth in a heat race and drive past very good race cars.” 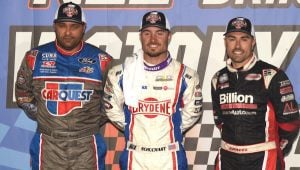 Gravel, who tied with Schatz atop the points at 469, called it “an odd night.”

“469 is not that great,” Gravel said. “It was just an odd night. I don’t think I have ever seen a night like that in all my years at the Nationals of that many top guys not transferring through. There was a lot of grease on the bottom of the race and it made it really difficult to make anything happen.”

Schatz, the 10-time Knoxville Nationals winner, was the most outspoken regarding the track conditions.

“The way it feels, it (469 points) will probably only be good enough for the front of the B. I don’t know what to say,” Schatz said. “Yes, I’m disappointed. There wasn’t anybody that could go through those heat races from the fourth row. The first lane and a half wasn’t close to being ready. It wasn’t ready when we qualified. I was pretty furious after that.

“But what can you do. I don’t do the race track. This is the Knoxville Nationals. This is our biggest race and 17 out of the 20 fastest guys were in the B. If I wouldn’t have run fourth in my heat race, I would have started 11thin the B.

“It’s surreal to sit and think about all the equations that could have played out. Little Haud (Sheldon Haudenschild) is not even close to being in the show, but he qualified in the top eight. I’m glad we are not in the same position. I will be curious to see if it is the same tomorrow night. If it is, we will be gritting our teeth, if it isn’t you’ll be able to pass from the fourth row.”