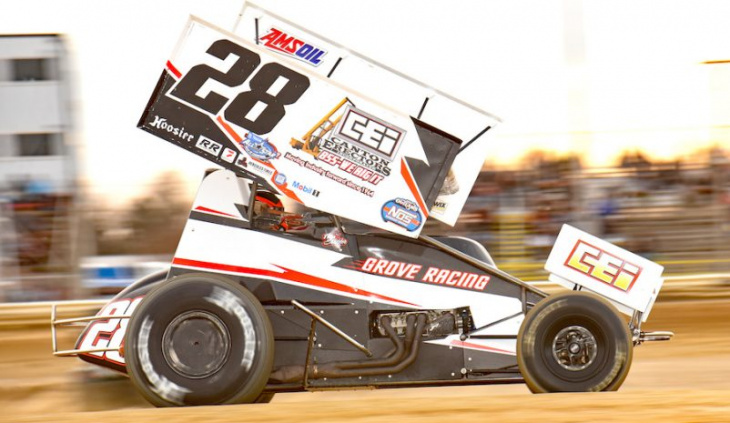 FRANKLIN, Pa. — Tim Shaffer paid an unexpected visit to Tri-City Raceway Park and he carried home the lion’s share of the purse in the 410 sprint car division.

Shaffer was recently reunited with car owner Brian Groves, for whom he has raced off and on for over 12 years. His last win at the speedway came in 2020, also at the wheel of the Groves No. 28.

Shaffer was late to stage for his heat race, thinking that the 410 Sprint Cars were coming out for hot laps. When he realized that it was his heat instead, Shaffer and company scrambled and he made it out in time to start at the tail. “I came up through there pretty good, and that’s when I knew that we had a good car,” he said.

Shaffer emphasized that he was having fun since hooking up again with Brian Groves. “I was racing my (Crate) Late Model and I just got a win with that. Then, Brian asked me to come back and here we are. It’s funny how things come together like that.”

Shaffer gave props to the Tri-City track preparation crew. “I know that some people complain about the track here, but they need to go around the country to realize how good it is here. I know that it is hard to get the track right starting in the daytime.” Shaffer knows quite a bit about track preparation himself, for he has a Kart track on his farm near Aliquippa. “It had a few dips, but you need to learn how to drive around them and maintain your speed.”

Also getting the win in the Donovan & Bauer Auto Group 358 Modifieds was Jeremiah Shingledecker, as a substitute driver for car owner Kevin Hoffman. Ironically, Hoffman entered this event second to Shingledecker in the point standings. Shingledecker’s win helped Hoffman to close the gap in the championship contest.