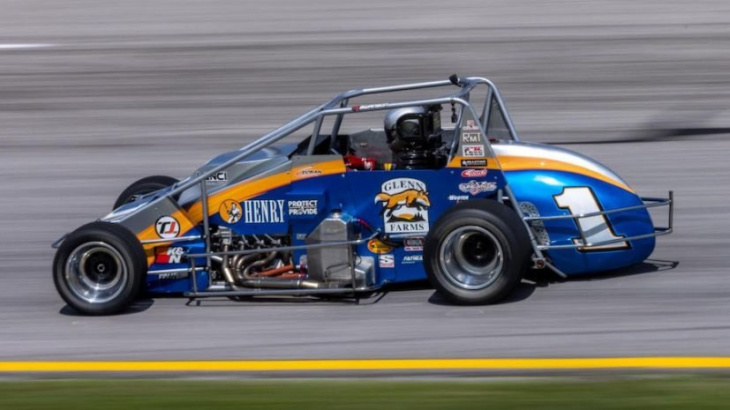 TOLEDO, Ohio — Since 1976, there’s been one individual who’s stood head and shoulders above all others in terms of USAC national feature victories at Ohio’s Toledo Speedway. That’s Rollie Beale.

On Saturday night, Kody Swanson moved atop the list, topping the 1973 USAC National Sprint Car champion’s long-standing record at his hometown track, and he did in the race named after the legend he passed.

The feat completed a “perfect game” of sorts for Swanson who picked off the fastest lap in Dirt Draft Practice, fast time along with leading all 100 laps in his Doran-Dyson Racing/Glenn Farms – Henry U.S.A. – Duncan Oil/Beast/Lanci Ford.

It was the Kingsburg, California native’s fourth consecutive win in the event. Swanson, the only driver to have started all nine USAC Silver Crown events at Toledo, has now led 655 of the 1,000 laps run in Silver Crown competition at Toledo.

Earlier in the evening, Swanson added to his Toledo accolades with a sixth career pole position at the track, the 39th of his career to go along with his 36th career win.

That’s six poles and six wins at Toledo for the six-time champ. That sort of six-pack is one that Swanson never tires of.

“You race to win; you race to have fun and you race to do it with your team and comrades, and you try to go out and do the best job you can for them,” Swanson praised. “These guys put in the effort that they want to win and so do I, so that’s the goal and that’s what we come for, and I’m really fortunate to be a part of this team.”

Swanson swooped to the lead right from the start as third-starting Justin Grant slipped under Ferns to gain the second position on the opening lap. Meanwhile, Leary was hustling from the back of the pack, gaining entry into the top-10 on the 27th lap and into the top-five on lap 47 as he dashed around the outside of Logan Seavey on the back straightaway on lap 42.

Just past halfway, while Swanson hastened to a commanding two-second advantage on the rest of the field on lap 56, the battle for second raged on. Third-running Ferns found some bite at the exit of turn two and made a run to the inside of Grant at the entry to turn three when the two drivers tires touched – Taylor Ferns’ right front and Grant’s left rear.

Ferns spun sideways, punching through the outside Styrofoam wall while both fifth-running Leary and 15th-place Travis Welpott careened nose-first into the foam.

Grant spun into the infield but motored on without stopping. Ferns and Welpott were finished for the night while Grant continued and Leary soldiered on, but wasn’t quite the same following the incident, dropping back to an 11th-place result when all was said and done.

When racing resumed, Swanson raced away through traffic and maintained a sizable two second lead that dwindled only slightly through traffic, but not enough to place an enormous amount of pressure on Swanson’s advantage.

Despite turning the majority of his fastest laps of the race during the latter stages, Swanson tried to maintain that razor’s edge balance between going hard while also trying to conserve as he worked his way through the traffic.

“It’s hard because you feel like you break your rhythm and it almost makes it worse,” Swanson explained. “There were a couple of times when I tried to change my pace and I got looser off and that made it harder on the tires. So, I just tried to find my rhythm and make it count. Lapped cars are a part of racing; you work your way through them and hope you don’t give up too much of a lead and just try to keep on going because you know these guys are coming behind you that make you have to earn it every time.”

Meanwhile, Santos looked high and low to get by Grant for the second position for several laps, and his perseverance paid off when he powered around the outside of Grant for the runner-up spot in turn two on lap 92. Yet, still, Santos had a long row to hoe with a nearly three-second deficit and the clock running out.

Swanson’s clock was right on time as he passed under the checkered flag for the second consecutive points race after scoring a similarly dominant win in mid-July at Winchester (Ind.) Speedway. Swanson closed the door with a 3.114-second advantage to win once more at Toledo over Santos, Grant, Seavey and Russ Gamester who tallied his first USAC Silver Crown top-five result since finishing third at the Terre Haute (Ind.) Action Track a decade ago in 2012.

On Saturday night, Santos made an impressive late charge to a fourth consecutive second place Rollie Beale Classic result after winning the event back in 2017.

Grant experienced a rollercoaster last half of a race at Toledo.  After a few donuts in the grass infield following a lap 56 incident with Ferns, he came home to finish third in his Hemelgarn Racing/NOS Energy Drink – Super Fitness – Hemelgarn Enterprises/Beast/Speedway Ford.