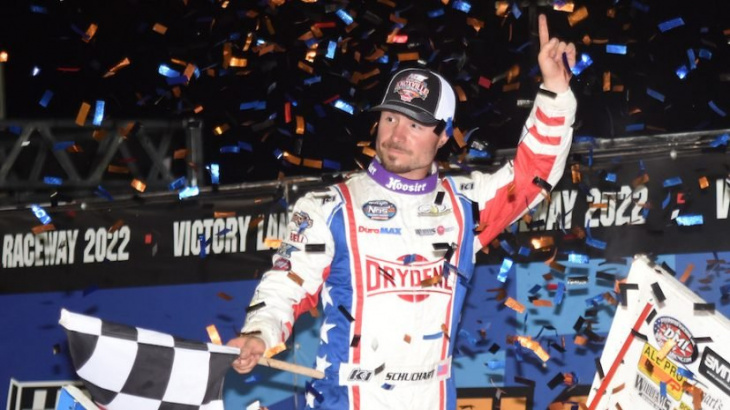 Schuchart, who won the Capitani Classic on Sunday night, held off 10-time Nationals champion Donny Schatz for the second consecutive race on what was a very unusual qualifying night at the legendary half-mile track.

Schuchart won the feature but qualified only 26th earlier in the night and had poor points night, hurting his position for Saturday night’s program.

“It definitely feels good to get two wins at Knoxville,” said Schuchart after putting the Shark Racing No. 1s in victory lane for the second time in four nights. “I would definitely like to do a little better in qualifying. We race well.

“I felt like a sitting duck there at the end,” Schuchart added. “I thought I might see Donny there at the end of the night, but we held on for the victory. We have a good shot at it if we can put ourselves in a position to run for it.”

But the story of the night was the fact that Schatz and David Gravel, who finished third, were the only drivers who qualified in the top 20 and also transferred into the main event. That turned the points upside down. 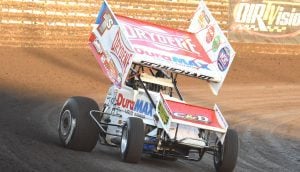 With 500 points possible, Schatz and Gravel led the way on opening night with 469 markers each, generally quite low for a qualifying night. Schuchart, meanwhile, was eighth in the standings with 444 points.

Gio Scelzi finished fourth in the feature and was fourth in points at 445, while James McFadden came home fifth and ranked ninth in the points.

Schatz nearly ran down Shuchart during the final five laps, but changed his strategy after almost tangling with a slower car.

“Quite a few cars in front of us made mistakes there,” Schatz said about his ability to run down Schuchart. “I could drive across the corner pretty well, and I did that to a few guys. I was aggressive trying to get there and then I got big picture racing I did not want to put myself in a bad position. I came up on a car that basically stopped in the middle of turn four and that really caught me off guard. I just wanted to see what I needed with the car and what we might be able to change.”

Gravel passed Scelzi on the final straightaway to finish third and end up tied with Schatz in the points.

“Happy to hit my last lap good and get on the podium,” said Gravel, who won the Nationals in 2018.

With the points scrambled, a lot of drivers from Wednesday’s program are going to be faced with a lot of work to do during Friday’s Hard Knox program.