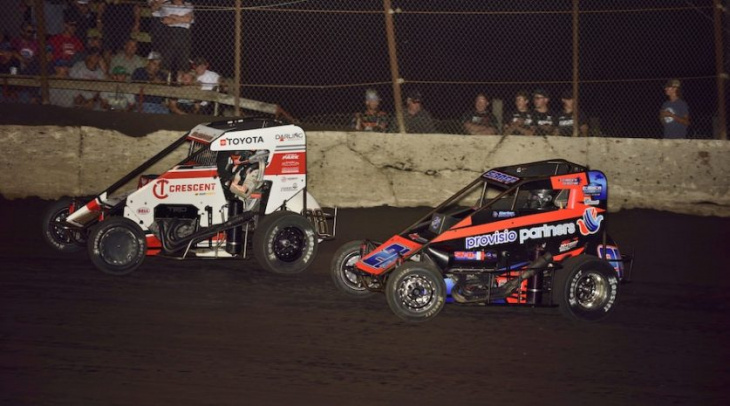 Launching the field of stout competitors on the initial green flag would find high point qualifier Gavan Boschele line up with Chance Crum on the outside of the front row as Crum would use high side momentum to take the opening lap lead.

Battling to take the top spot on lap five, Gavan Boschele would appear to be the fastest driver leading until the midway point. Sixth-starting McIntosh mounted a charge behind Boschele with Crum, Michael Pickens and Daniel Adler all running inside the top five.

Overtaking for the lead, McIntosh would hold the front of the field for the remaining circuits as one time leading Gavan Boschele would suffer from a hard roll over when trying to race back to the front.

“The track was really tricky tonight. I knew we had to get to the front early and hold on late, but this was a really fun one. I can’t thank my crew enough,” McIntosh said.

Surging late, Jade Avedisian flew through the field to notch runner up as Michael Pickens completed the feature’s podium placements for the second night in a row.