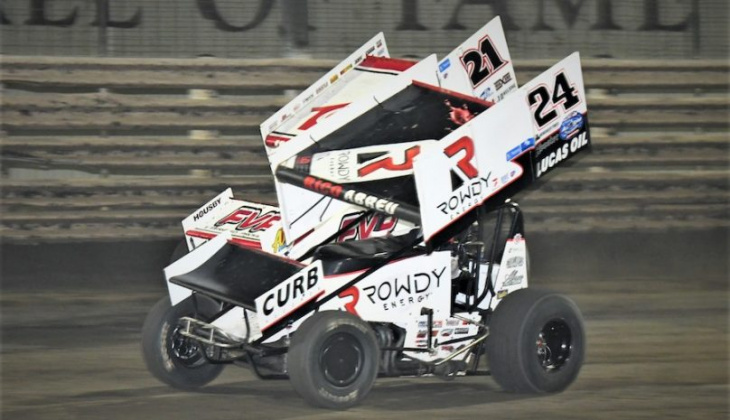 KNOXVILLE, Iowa — With 55 cars in the pit area on Weiler Night featuring the All Star Circuit of Champions, one knew someone would have to earn the win Saturday at Knoxville Raceway.

Rico Abreu did just that with a late-race pass to put his No. 24 in victory lane and collect $8,000.

Clint Garner topped the 42-car 360 field assembled for his 47th career victory here. It was the last tune-up before the 32nd annual Knoxville 360 Nationals commences this Thursday, August 4.

Kerry Madsen jumped out from his pole position starting spot to lead early in the 25-lap All Star main event, followed by Tyler Courtney, Gio Scelzi, Cory Eliason and Brian Brown.  Bill Balog had his wing supports come loose to bring a caution just one lap in.

On the restart, Abreu moved by Brown into the fifth spot, and then claimed fourth from Eliason on lap four. Eliason and Brown were locked in a heated battle for a spot inside the top five.  Madsen was into lapped traffic on the eighth circuit.

Abreu performed a slider on Scelzi to take third on lap 11, while Courtney made a serious bid to challenge Madsen for the lead. Schuerenberg spun to bring caution again at that point.  Madsen led Courtney, Abreu, Scelzi and Eliason back to green.

Before a lap could be completed Aaron Reutzel turned over in turn four, collecting Schuerenberg.  When green replaced the red, Brown shot into the top five for good.  Madsen entered traffic again with five to go, with Courtney and Abreu hot on his heels.

On lap 21, the trio battled on the backstretch.  Abreu took the low side to shoot by both Courtney and Madsen into the lead.  Putting a lapper between himself and his pursuers, he managed to keep his advantage, despite an adventurous last lap that saw him get over the cushion twice.

Abreu was followed at the line by Madsen, Courtney, Scelzi and Brown.

“I just got tighter and tighter,” said Abreu. “I just need to really work on hitting my marks. My wing valve keeps coming back. We’ve been having an issue the last few races. Rick Warner has really turned our program around this year. At the end of these races, I just get so excited.  The more I get in these positions, the easier it is to calm me down. This is good momentum going into the next couple weeks. Twenty-five laps…you’ve got to go! I could really get in (the corner) and get off, especially in three and four. They got to racing, got away, and then scooped back up to me.”

Garner led early from the pole in the 360 feature over Tony Rost, Terry McCarl, Devin Kline and Ryan Giles.  McCarl joined Randall, becoming the second of one of the top three drivers in points heading into the night to have a problem as he had to go to the tail after fixing some ignition issues two laps in.

Zeb Wise spun at that point to bring another caution. Garner led the restart, ahead of Rost, Giles, Sawyer Phillips and Kline.  Aaron Reutzel shot from sixth to fourth on that restart, while Giles took second from Rost.  Reutzel followed that up with a slider of Rost in turn four to take third, while Gio Scelzi, who started 14th, moved into fourth on lap five.  Shane Golobic entered the top five on lap six.

Garner entered lapped traffic on lap eight, while Jamie Ball suffered a flat and Matt Allen spun in turn two.  Garner led Giles, Reutzel, Scelzi and Rost back to green.  Reutzel quickly took second, with Scelzi in tow.  The leaders were back in traffic with three to go.

Nothing would faze Garner, who claimed $2,000 for his win.  Reutzel followed, ahead of Scelzi, Grimes and Golobic.