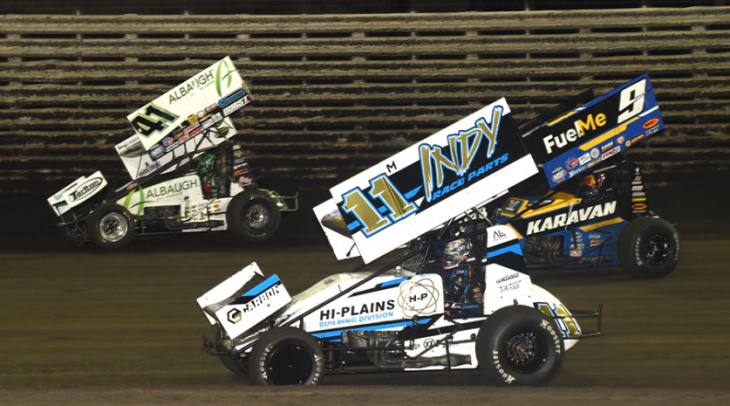 KNOXVILLLE, Iowa — Sixty-nine cars and drivers signed in for Sunday night’s 11th annual Capitani Classic at Knoxville Raceway, which is traditionally the last chance for competitors to get laps at the legendary half-mile track before the Nationals begin on Wednesday night.

While many of the drivers considered contenders to win the 61st annual NOS Energy Drink Knoxville Nationals, took advantage of the opportunity, one notable did not.

Brent Marks, who swept the Historical Big One and Kings Royal at Ohio’s Eldora Speedway last month, did not compete on Sunday night.

• Cole Macedo will make his Knoxville Nationals debut as a quasi-teammate to his brother Carson. Cole Macedo will pilot the Dietz Motorsports No. 14 sprint car owned by Phil Dietz, who is the crew chief and co-owner of the Jason Johnson Racing No. 41 driven by Carson Macedo on the World of Outlaws tour.

• California racer Justin Sanders will take his first crack at Knoxville Raceway aboard Kevin Swindell’s No. 39 Swindell SpeedLab machine. Sanders will compete in both the 360 Nationals and the Knoxville Nationals.

• Four-time USAC champion Brady Bacon is also scheduled to return to the Knoxville Nationals this year.

• Harli White and McKenna Haase are the only female drivers entered in this year’s Knoxville Nationals.

• There are four sets of brothers entered in the Knoxville Nationals — Macedos, Madsens, McCarls and Phillips.

• Terry McCarl and his sons, Carson and Austin, are entered as are Mike Wagner and his son Logan.

• There are nine Australians and four Canadians entered in the Nationals.

• World of Outlaws Sprint Car Series Rookie of the Year contender Spencer Bayston will sport a new look on his CJB Motorsports No. 5 during the Knoxville Nationals, with the car featuring TrueTimber’s Strata camo pattern.