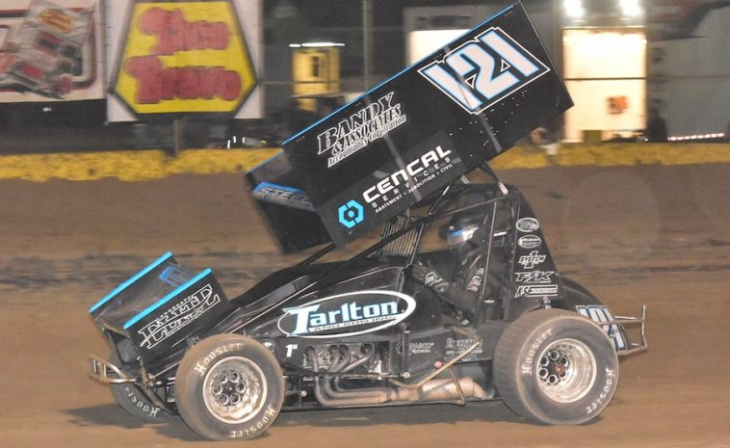 Steele’s race got off to a rocky start as he jumped the initial green flag after starting from the outside pole.  Race officials put Steele back one row as pole sitter Chase Johnson would set the pace in the Quinn Motorsports No. 28 over Eames.  Johnson would hold the lead thru a lap-five caution flag for a Brody Fuson spin in the second turn.

Steele wasted little time getting to the back bumper of Johnson as the two sliced and diced thru lapped cars. But on lap 12 in very heavy traffic, it was Steele who would pass Johnson with a three wide move.  Johnson however would take back the lead on the 15th circuit but a caution would force him to restart second again, having to revert back to the previous lap’s running order.

With laps winding down, it was an obvious two car race between Johnson and Steele.  Johnson dove to the inside of turn three as the two once again were having to deal with slower cars.  He would take the lead only to lose it again when he had the misfortune to run into a slower car and spin in the fourth turn, bringing out a caution.

Steele would inherit the lead and rip the lip of the ¼ mile bull ring until the checkered while Andreotti and Eames had their own battle.