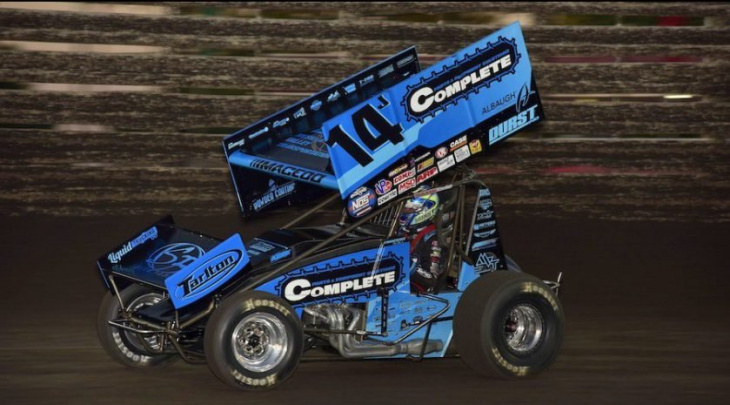 KNOXVILLE, Iowa — Wednesday’s Knoxville Nationals opener saw a handful of Nationals rookies make some noise as four of them qualified for the feature, including one who might’ve already punched their ticket to Saturday.

Sanders may have not finished atop the first-timer’s list in the main event, but the entirety of his night earned him enough points to be sitting fifth and likely locked into Saturday’s finale.

The 29-year-old, piloting the Swindell Speedlab No. 39 owned by Kevin Swindell, began the night by qualifying third. Sanders couldn’t overcome the big invert in his heat but managed to transfer to the A-main and capped the night with a 24th to 15th charge.

“I can’t believe it, honestly,” Sanders said of likely making the main event. “It’s pretty crazy to think that I might be in the Knoxville Nationals A-main with (Donny) Schatz, (Kyle) Larson, and (Brad) Sweet. All those names, it’s pretty insane.”

Next in line of the Nationals newbies was another Californian, Cole Macedo.

Macedo spends much of his time on the slick ovals of Ohio driving for Ray Brooks Racing, but he adapted quickly to the black clay, setting himself up with enough points to start fifth in the feature.

Early on Macedo drove as far up as third, but a mid-race restart didn’t benefit him as he slipped a few positions before taking the checkered flag in eighth. He sits a solid 11th in points.

Next in line was Corey Day, making it a trio of Golden State gassers impressing in their Nationals debut.

The Clovis driver has continued to get comfortable on the half-mile as the Jason Meyers Racing team hauled the No. 14 east following Dirt Cup earlier this year, and they’ve been a frequent Knoxville competitor since.

Day didn’t qualify as well as he’d hoped, but the heat race invert placed him on the front row and the teenager capitalized. Day won the 10-lapper by nearly three seconds.

The resulting points lined him up 12th for the feature, and he moved forward to ninth by the end of the race, a finish that, he thinks, could’ve been better if it weren’t for an early yellow flag.

“We actually didn’t qualify too great, but with the heat invert, there was a 40-car total invert, so I stared outside front row for the heat and was able to get the win,” Day said. “From there we were 12th in points, so we started 12th in the main. I wish the first start would’ve gone. I think we were up to eighth or sixth or something, but it didn’t count. We still got ninth out of it so it’s alright.”

Completing the list of rookies to make the prelim feature was Lachlan McHugh.

The Australian struggled a bit in the feature after lining up 10th, ultimately bringing it home 20th in his inaugural Nationals prelim.

McHugh sits 21st in points heading into the remainder of the weekend.