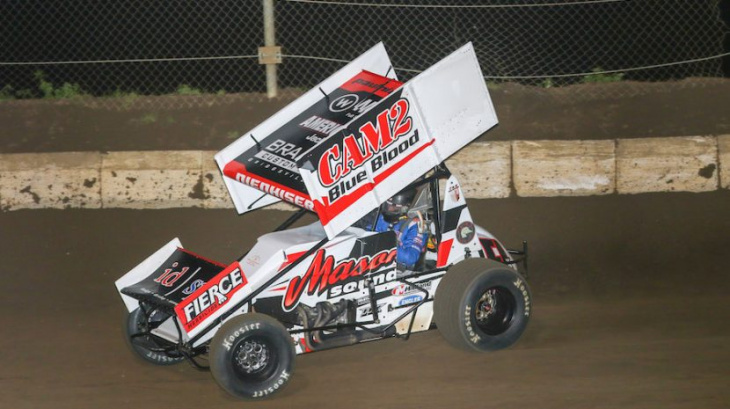 JACKSONVILLE, Ill. — It was a familiar face visiting victory lane on Friday night at Jacksonville Speedway, as Paul Nienhiser pocketed the $3,000 payday in Friday’s #TheStandridge for the Midwest Open Wheel Ass’n.

Zach Daum and Zach Hampton led the field to the green flag, with Daum upsetting his No. 31 McGarry Motorsports ride in the middle of the first corner, sliding him back to the fifth position as Hampton was able to pull away to a comfortable lead.

The field entered lapped traffic by lap five and Hampton’s lead was shortened, allowing fifth-starting Paul Nienhiser to close in. Nienhiser was within four car lengths of Hampton, when the field slowed for a red flag on lap 8 when Brayton Lynch got upside down in turn one, collecting Austin Archdale. Both drivers were unhurt in the accident.

Piloting his No. 35 machine around the top shelf of the quarter-mile with Nienhiser in tow, the last thing that Hampton wanted to see again was a yellow flag as Zach Daum spun while running fourth on lap 15, setting up a restart with 10 laps remaining.

A 10-lap shootout to determine the winner was about to commence. Hampton fired in the restart zone, but Nienhiser was quick on the draw as well, pulling alongside Hampton as the two flew down the backstretch.

Shelby Bosie had moved forward from seventh, working past Trevin Littleton to battle with Kyle Bellm for third with a handful of laps remaining. Hampton continued to lead, but quickly saw his reign come to an end as he collided with the turn-one wall, ripping his right-rear tire away from his race car.

Just as Hampton slowed in turn one, Slater Helt, who was running in 10th, got upside down in turn four to draw a red flag.

Inheriting the lead with seven laps remaining, Nienhiser was looking for his first MOWA victory of the season, but it wasn’t going to be without a battle.

Bellm was fighting back challenges from a hard charging Bosie, which in turn allowed Nienhiser to pull away from the rest of the field building a comfortable lead.

Bellm and Bosie continued to battle for position with Trevin Littleton and Chris Urish waging war for the fourth spot.

Nienhiser was working lap 22 as Caden Englehart slowed with a right-rear flat tire to re-rack the field for what was the final restart.

A single-file restart with Nienhiser in front of the field, Bellm gained to set his sights on Nienhiser as he looked for his first career MOWA Sprints win. Nienhiser fended off Bellm as he led the final three laps to pick up the victory.

In doing so, Nienhiser tied Jerrod Hull with 22 all-time MOWA victories, the most in series history.