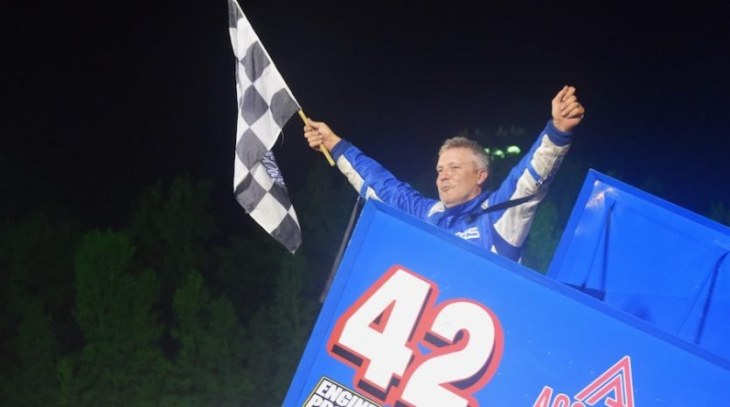 In front of a bevy of SPEED SPORT Network cameras, Blonde led 38 of the 40 laps at the three-eighths-mile paved oval and pulled away late from Ryan Litt, winning by 2.983 seconds in a race that finished in the early hours of Sunday morning due to several lengthy delays during the support division features.

Blonde’s victory was his second of the season with Must See Racing and the ninth of his series career, moving him into a tie with JoJo Helberg for third on the all-time list.

“That was fun, but it wasn’t easy,” Blonde noted. “Any time you’ve got Ryan Litt on your bumper, you’re going to be nervous. I actually didn’t feel that good about the car in the last five laps … and I was waiting for him to show me a nose or something, but I guess we still had a pretty big lead there. He said he was pretty tight, and I was tight (on corner entry), but just kept snapping it loose on exit and kind of dirt tracking it in the late laps.

“It wasn’t always pretty, but we’re glad we got the job done.”

The Litchfield, Mich., native was presented the winner’s trophy in victory lane by event namesake Bob Frey, a five-time winner of the Lucas Oil Little 500 for non-winged sprint cars and a four-time winner of the sprint car portion of the now-defunct Copper World Classic at Arizona’s Phoenix Raceway.

“Bob Frey is someone who a lot of us looked up to through the years, and there’s a lot of history that he made with the cars he drove. To win a race honoring his career means a lot,” Blonde said. “There’s a lot of history in this team, though, also. Gary Fedewa has been bringing us to the track recently, and he won plenty of races for (owner) Tony Nosal in this car. It’s been cool to have Gary back at the track with us.

“Just a lot of people go into this team and into this sport … and we’ve got to all be thankful for that.”

Starting from the pole after an eight-car inversion, home-state driver Rick Holley led the field to green and paced the first two circuits, collecting $175 in lap money and a case of Pabst Blue Ribbon from fellow driver Joe Liguori for leading the opening lap – given in honor of late competitor Jerry Caryer.

Holley was holding Blonde at bay until a shocking crash off the second corner changed the entire complexion of both the race and the Must See Racing championship points battle.

Contact between incoming point leader Charlie Schultz and two-time defending Little 500 champion Tyler Roahrig, who was filling in for the injured Jimmy McCune in the familiar No. 88 sprinter, sent Schultz spinning off the second corner and ended the night for both veteran competitors.

Schultz tossed his steering wheel out of the car in frustration when he came to a halt before walking off to his trailer, his hopes of a maiden series title taking a major hit in the process with just one race remaining.

From there, Blonde took control of the race on the lap-three restart, surging into command from the outside of the front row and never looking back despite a mid-race duel through lap traffic with Ryan Litt.

Blonde weathered a restart with 16 laps left, following a turn-one spin by Jacob Dolinar, and went on to the comfortable victory over Litt. The Canadian settled for second one week after snapping a nine-year Must See Racing winless drought at Michigan’s Berlin Raceway.

“This was my first time here, so I had to learn everything as I went today,” explained Litt. “It’s a unique track and I like it, but we were just super tight in the feature and didn’t have much for Blonde there.”

Holley fended off a late challenge by Liguori to finish third, the best night of his Must See Racing career.

“The car was really good, and the scary thing is, we know it can be better,” tipped Holley. “These are the kind of nights we’ve been working for, and it feels good to finally put it all together like we did here.”

Liguori’s fourth-place finish allowed him to assume the point lead with only the season finale at Pennsylvania’s Jennerstown Speedway remaining. Todd McQuillen closed out the top five.