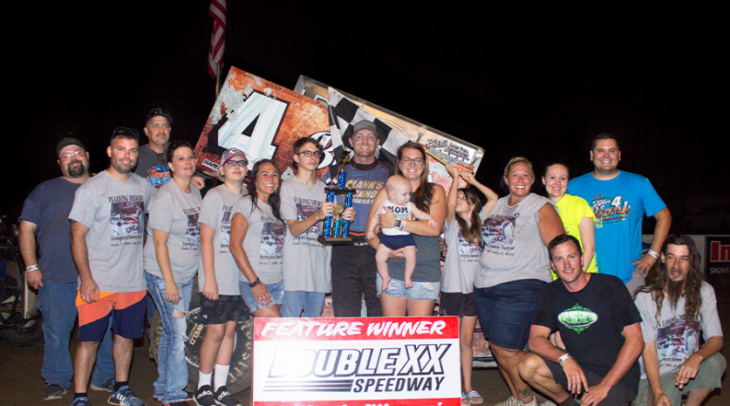 Season champions in the two weekly divisions of Winged Sprint Cars and Super Stocks were crowned at the completion of the evenings racing action.

The Winged Sprint Car feature would decide the track champion for 2022. Heading into the event Taylor Walton and Jack Wagner were tied for the point lead, so this feature would truly decide the championship.

Pole starter Ben Brown would move into the lead on lap one but a caution for Broc Elliott and Tanner Sloan would bunch the field after one completed lap.

Brown would lead the restart followed by Wagner, Walton, Blank and Mackenzie Borchers. On the restart Brown would continue to lead until lap 12 when he would brush the wall on the backstretch allowing Wagner and Blank to motor by.

Wagner would open a ten car length lead over second place Blank as they both worked lapped traffic. A lap-18 caution for the slowed car of Tanner Sloan would reset the field behind the leading No. 77.

On the restart things changed in a hurry, Wagner would slip high exiting turn four allowing Blank to overtake him for the number one spot. Wagner would start to fade with Walton moving into the number two spot, Brown would ride third with Wagner eventually settling into the fourth position.

On the white flag lap Brown would get into turn three with a head of steam and tap the back of the No. 93 of Walton turning Walton sideways as Brown would slide off the top of turn three.

Walton was able to correct his sprinter and follow Blank under the checkered and yellow displayed. At the finish it was Blank with the victory, Walton held on for second, Wagner would finish third, Tyler Elliott fourth and Curtis Evans fifth.

The Super Stock feature was won by Derek Henson from the pole.