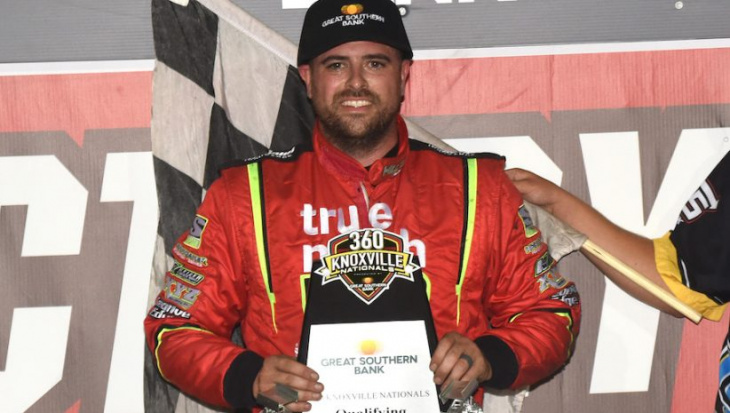 KNOXVILLE, Iowa — Sam Hafertepe Jr. roared to victory for the second year in a row on night one of the 360 Knoxville Nationals presented by Great Southern Bank.

The Sunnyvale, Texas, native earned $3,000 for his drive aboard the Hills Racing No. 15h. Another Texas native, Aaron Reutzel secured the highest point total of the night, heading toward Saturday’s finale.

Thomas Kennedy shot out to an early lead from the pole position in the 20-lap main event, ahead of Garet Williamson, Hafertepe, defending 360 Knoxville Nationals champion, Gio Scelzi, and Ayrton Gennetten.

By lap five, Hafertepe was cooking on the low line, passing Williamson for second on lap five.

Hafertepe reeled in Kennedy and shot to the point with a slide job in turn two on lap seven. At that point, Alex Vande Voort contacted the front stretch wall, spun and came to a stop inside turn one, bringing the only caution of the event.

Hafertepe led Kennedy, Williamson, Scelzi and Gennetten back to green. Williamson shot into second, while Reutzel moved into the top five by lap nine. While Hafertepe cruised up front, Scelzi reeled in Williamson and blew by him on the backstretch to claim second. Reutzel notched fourth on the same lap.

Hafertepe was into traffic with three laps to go, but was never seriously challenged the rest of the way in his third career win here.

Scelzi held onto second, followed by Reutzel, Williamson and Kennedy.

“Tonight, we had a really good racecar,” said Hafertepe. “The guys just kept working all night long. We weren’t good in time trials, weren’t good in the heat race…then we turned the wick up in the feature and really got it going good.”

“Sam is the Dale Earnhardt of the 360’s,” said Scelzi.  “The car felt good, it just took me too long to get going. I started running the bottom of three and four a little harder and moved to the top of one and two.  It was just a phenomenal racetrack.  I love coming here and the fans are awesome.  This is definitely a home racetrack for me and I want to win this one bad.”

“You almost don’t want to win these prelim nights, because it means you may not have qualified well,” said Reutzel. “We qualified good, got to second in our heat, and started seventh and ran third. That’s a really good points night. That’s what it’s all about for Saturday.  We tried a couple things in the A and we weren’t very good early. All in all, our car is running around well. I’m pumped we got through this and we’re looking forward to Saturday.”