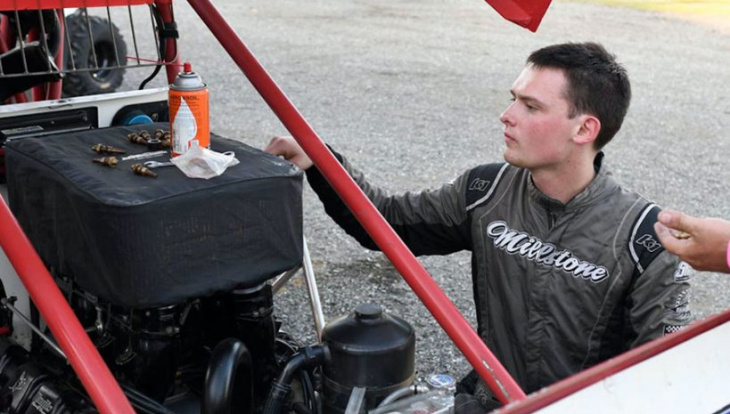 While Jason Sides is on the sidelines awaiting hip replacement surgery, 24-year-old Robbie Price of Cobble Hill, B.C., is the racer Sides selected to drive his familiar No. 7s sprint car as the team honors its commitment to the World of Outlaws NOS Energy Drink Sprint Car Series.

Price made his first start in Sides’ ride May 20 at Ohio’s Attica Raceway Park.

Sides told SPEED SPORT that Price’s background and work ethic were deciding factors in his selection.

“Actually, that’s why I chose him over some others because he raced for his own team and did a lot of it himself — run the valves, drive the truck, wash. He did it all himself like we do,” Sides said. “It’s been pretty good. We’ve been working together pretty well.”

“I’m not afraid to work on stuff. Jason obviously knows what he’s doing and has been doing it a lot longer,” Price noted. “I’ve been doing it the same way he does; just you and another guy and make it happen.”

In addition to his roles as car owner and crew chief, Sides is now a driver coach and says his knowledge of the various tracks can help Price better prepare.

“The biggest thing is knowing the race tracks, the characteristics of them and how they race,” Sides acknowledged. “I can explain that to him and he can have a better game plan going into it rather than going in blind since he’s never seen most of these race tracks.

Price is the youngest Jim Raper Memorial Dirt Cup feature winner in the history of the marquee event hosted by Skagit Speedway in Alger, Wash.

While Price grew up racing in the Northwest, he’s no stranger to competing in the middle of the country. He tackled the ASCS National Tour in 2019, placing eighth in the championship standings following a pair of triumphs.

The 2017 Skagit Speedway track champion has earned at least one feature victory during each of the last three seasons and in six of the last seven years.