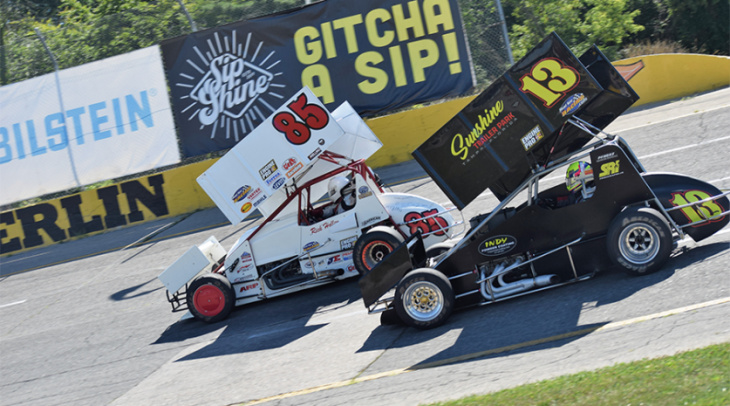 Title rivals Charlie Schultz and Joe Liguori are separated by a single point with just two races remaining, having matched each other nearly blow for blow in the first seven events this year.

After a period of six consecutive years – from 2015 through 2020 – of McCune Motorsports entries having the points championship virtually on lockdown at this stage of the season, Schultz tipped that he believes this year’s back-and-forth battle is “good for business” as it pertains to Must See Racing. 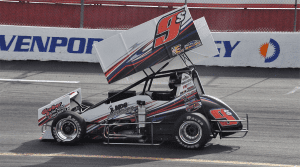 Charlie Schultz (9s) hopes to add a sprint car championship to his racing resume this season with Must See Racing. (Must See Racing photo)

“It definitely gives a lot of our fans, both mine and Joe’s, something to really get behind and get amped up over,” said Schultz prior to last weekend’s event at Michigan’s Berlin Raceway.

Driving for veteran car owner John Reiser, Schultz is seeking his first Must See Racing sprint car championship and has led the points after all but one race this season.

However, he’s seen his advantage dwindle in recent weeks, thanks to a string of three straight fast qualifying efforts by Liguori that helped erase a portion of the championship lead.

“The way our points system is now (with bonus points for qualifying and heat races), you have to think about everything from the moment you unload the race car,” Schultz noted. “It’s qualifying, the heat race and the feature. You can swing a lot of points back and forth depending on how you do in each of those parts of the night. Joe has outqualified me a lot lately, but we’ve finished ahead of him in most of the heat races and features to somewhat balance things out.

“At the end of the day, though, you have to win races. That’s what pays the most points, and we haven’t done a good job of closing the deal this year,” added Schultz, who is winless with Must See Racing this season. “Feature wins make the biggest difference and that’s what we really need to put our focus on.”

As both the driver and car owner of the No. 13 car, Liguori knows that the majority of the pressure to succeed down the stretch falls squarely on his shoulders, and he’s proven recently that he can step up and perform when the chips are down.

Liguori is the reigning Must See Racing Driver of the Year and would have been crowned champion officially last year, had it not been for the COVID-19 pandemic forcing alterations to the season format.

This time around, he’s hoping to get the “real big trophy” and put his name alongside the likes of Troy DeCaire, JoJo Helberg, Brian Gerster, Jimmy McCune and Anthony McCune as a champion under Must See Racing sanction.

“I got a nice plaque (for winning Driver of the Year), but my trophy case would look a lot better with one of those tall championship trophies that (series owner Jim) Hanks gives out at the banquet every year,” Liguori said with a chuckle.

The Tampa, Fla., native – now living in Lebanon, Ind. – admitted that, while his qualifying performances of late have helped him make up ground in the standings, they have actually hurt him somewhat in his quest for feature victories.

“I guess I have to learn how to slow down just a little bit,” Liguori joked. “I go out and drive my heart out every lap, and the inverts have come back to bite us lately. We’ve struggled in dirty air and have just been too tight during some of these features. 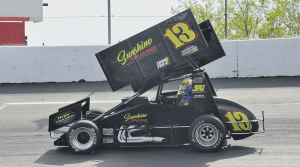 Joe Liguori (13) has won in everything he’s driven during his career, including a pavement sprint car. This season he’s chasing a championship with Must See Racing. (Must See Racing photo)

“That’s something that we have to work on, but Charlie has said the same thing … you have to win races and that’s what our goal is this last month of the season.”

While they may be fierce rivals on the track, the pair of title contenders are good friends in the pit area and away from the race track – something both drivers say they relish most about this year’s battle.

“When you’re racing against someone like Joe, who you know works on his own stuff and races with respect, it makes it a lot of fun to go out and do what we’re doing this year … because you know you can trust him to fight you clean,” Schultz said. “We’re enjoying racing with him and I hope it comes down to the last few laps at Jennerstown in a few weeks – just with our car on top at the end of it all!”

“Charlie’s a friend, but it doesn’t mean that either one of us wants to beat the other one any less,” added Liguori. “We’re both super competitive and that’s what’s fun about this year; we know that whoever wins it all at the end of the day will have earned it because we both gave it our all.”

An added dimension to this weekend’s race at Lorain for both drivers, is bonus money.

Through four eligible features this year, no driver has elected to take the Steadfast for Veterans Challenge, a bonus program that gives the fastest qualifier the option to drop to the rear of the starting grid prior to the main event in exchange for a guaranteed $500 payout.

Should that driver come through the field to win the race, they would earn an additional $500 bonus for a total of $1,000 in addition to their normal feature winnings.

However, the caveat to the challenge is that when the fast qualifier declines to drop to the tail on a given night, the $1,000 left on the table rolls over to the next event to create an increasing jackpot.

That means that Saturday’s 40-lap Bob Frey Classic at Lorain poses the opportunity for the fast qualifier to start from the rear and earn a total bonus of $5,000 if they can capture the checkered flag.

Combined with heat race payouts and currently confirmed lap money for the event, one driver has an opportunity to pocket more than $7,700 if they were to set fast time, win their heat race, and then win the feature from last after taking the Steadfast for Veterans Challenge.

“As a sponsor for the series, I’m honestly a little surprised that nobody has attempted the challenge to this point,” admitted Tony Roberts, the founder of Steadfast for Veterans. “The fan in me is excited, though, to be able to have a potential jackpot this large heading into one of the biggest races of the season on the Must See Racing calendar. It’s definitely quite a carrot to have out there for the drivers and their teams, especially after some of the great races we’ve seen already through the summer.

“Last week, we saw Ryan Litt get inverted to 10th and still come through the field to win at Berlin (Raceway) … so I believe that it’s doable for someone to win from last and collect that bonus money, especially with the extended distance of the feature and the ability to use the high lane in the corners at Lorain,” Roberts continued. “I think that if the challenge does get taken this weekend, it will make for a very entertaining race and create a lot of added excitement for the race fans.”

Litt, the only Canadian driver in the Must See Racing field, appears primed to take on the “favorite” role when it comes to the Steadfast for Veterans Challenge. He roared from 10th starting spot to the lead in just three laps at Berlin over the weekend en route to his first victory with the series since 2013.

It all makes for a pot that’s just waiting to be stirred Saturday night in Northeastern Ohio.