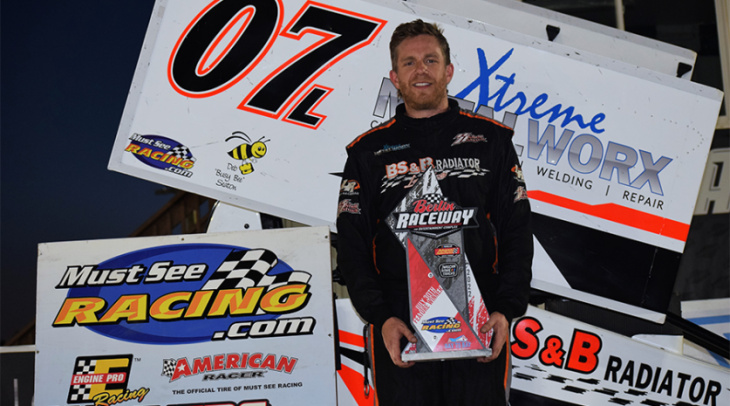 MARNE, Mich. – The running joke in the pit area following Saturday night’s Must See Racing Engine Pro Sprint Car Series race at Berlin Raceway was that Ryan Litt had forgotten how to celebrate properly, given he nearly stumbled off the top wing of his race car in victory lane.

Litt was quick to note, of course, that it had been more than nine years since his last win in a Must See Racing-sanctioned event, and to cut him some slack for his less-than-graceful slip on the frontstretch.

However, though he might not have celebrated as smoothly as his prior win at Florida’s Five Flags Speedway, Litt made one thing abundantly clear at Berlin – he hasn’t forgotten how to wheel a pavement sprint car against the best in the business.

The Canadian’s near-flawless performance – driving from 10th to the lead in three laps and opening up an advantage of more than four seconds at one point – was accentuated by his perfect placement of his race car in the second half of the Engine Pro Fast Car Dash, when he held every advance of fellow veteran Jason Blonde at bay en route to the $2,500 victory in front of a standing-room-only crowd.

“I guess it’s like riding a bike,” Litt joked afterward. “You don’t forget how to do it; everyone just eventually gets better after a while, and you have to learn how to keep up and get better.”

Litt’s progression this season – his first campaign back with Must See Racing since 2019, prior to the COVID-19 pandemic’s effects on travel across the United States border with Canada – has been steady.

His first race back at Kalamazoo (Mich.) Speedway on Memorial Day weekend in May netted a fourth-place finish, and he followed that up with a third-place effort at Michigan’s Birch Run Speedway in June.

But Saturday night’s victory at Berlin felt like a culmination of Litt’s comeback trail – a reminder to fans of pavement sprint car racing and his competitors on the race track that the London, Ontario, native is still a force to be reckoned with.

“We never doubted ourselves as a team, but people always start to talk, you know, when you haven’t won in a while,” Litt admitted. “Our car has just been off since the start of the year, and we’ve been working to get it back where I’m most comfortable. We tried some things with the setup at the beginning of the season that just didn’t work for us. I mean, we were terrible for the first bit.

“This race here at Berlin … a place I’m pretty comfortable at, we just went back to some of our old notes and the car responded exactly how I was hoping it would,” he added. “I knew from the minute we started in practice that we’d have a bullet, and I think we proved it out there.

“To set fast time (in qualifying), be inverted to 10th and then still drive through the field to win the race, there’s not much more that you can prove than what we did in this one.”

Saturday’s win for Litt wasn’t one that had an impact on the championship race, since he missed the opening two races of the year at Virginia’s South Boston Speedway and hasn’t been in contention for the title as a result.

But it was a confidence builder, and a moment that Litt said should make the other teams in the Must See Racing pit area take note – the No. 07L team will be ready when the points reset and 2023 begins.

“All we can focus on this year is race victories, but we’re one of the teams out here that doesn’t have that championship trophy yet, and I know everyone on this team world like to change that eventually.”

Litt also took time to relish the moment, noting that, as a driver, you never know when – or if – that next race victory will come along.

“This is amazing,” Litt smiled. “I’ve won, I think, two or three (sprint car) races at this track, but this win is by far the sweetest of the bunch. I’ve struggled on these (American Racer) tires to get the right handle that we need for our race car … but we learned a lot this weekend and I think found more of what we need.

“Jason is one of the best there is on restarts, and I knew he’d be trying (to get past) me on the outside, but I just put my foot in it until we could get a gap. I think they remember that we’re here now, too.”

Litt and the rest of the Must See Racing Sprint Car Series will return to action on Saturday, Aug. 6 at Lorain (Ohio) Raceway Park when the inaugural Bob Frey Classic hits the road at the third-mile oval.

The race is being run in honor of legendary Ohio sprint car and Indy car competitor Bob Frey, who was inducted into the National Sprint Car Hall of Fame earlier this summer as part of the Class of 2022. It will be streamed live through SPEED SPORT TV.

Keyword: Berlin Score Puts Litt Back In The Must See Conversation