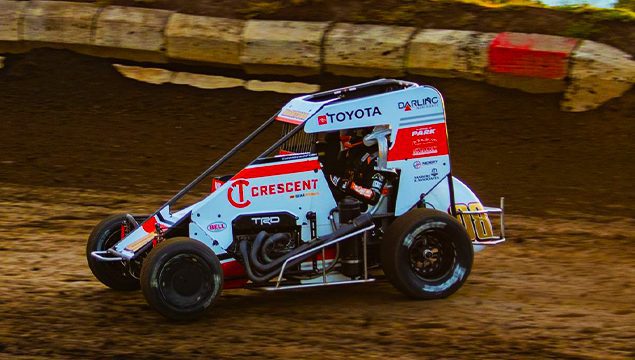 JACKSONVILLE, Ill. — Cannon McIntosh would once again run to the front of the field to claim the checkers at Jacksonville Speedway Friday night, earning his 11th career feature victory with the Lucas Oil POWRi National Midget League.

Launching the field of 20 competitors on the initial green flag would find high point qualifier Mitchell Davis line up with Gavan Boschele on the outside of the front row as Davis would take the opening lap racing lead.

Challenged early and often, Mitchell Davis would battle feverishly and appear to be in winning form with Cannon McIntosh quickly closing from starting third as Gavan Boschele, Michael Pickens and Brenham Crouch stayed within striking distance.

Taking control with nine laps remaining, Cannon McIntosh would not be denied in his sixth feature win of the season with Brenham Crouch gaining in the waning laps. McIntosh would hold steady up front to earn the hard-fought feature win.

“We really had to work for this one, the team gave me a good car but something wasn’t right to start the night. We thrashed after hot laps to get everything into shape and my team gave me the best car possible, I had to work for it but this was a lot of fun” said McIntosh.