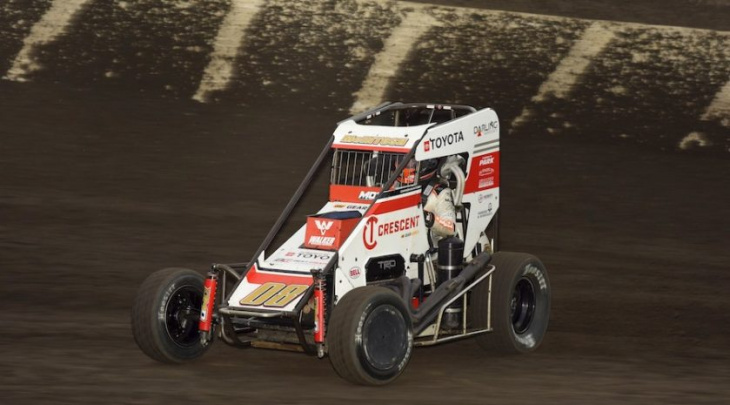 INDIANAPOLIS — Midget racer Cannon McIntosh has been one of the hottest drivers in the country over the past six weeks.

Heading into this week’s (Tuesday and Wednesday) DrivenToSaveLives BC39 at The Dirt Trak at Indianapolis Motor Speedway, McIntosh has eight victories and 14 top-five finishes in his last 16 races.

“We obviously had pretty good success with KKM. We still had ups-and-downs there, but we won races in USAC and POWRi.,” McIntosh said. “To come back here, there have been some bugs and the ups and downs for sure, but we’ve seen success as well. We’re learning a lot every week. It’s a challenge at times.

“you’re with KKM, you just hop in and drive, you don’t worry about anything, and you know your car is going to be pretty fast,” McIntosh added. “Here, my feedback is very important. I think it’s crucial in the long run to understand the physics and everything about how a race car works and what it does. Learning all the aspects of a race car helps you in the long run. There are times that you don’t need to worry about it, you just need to drive.

“But being able to learn those things is important especially for someone who wants to be in the sport for a career. It’s beneficial that I’ve been able to learn so many things.”

“It’s pretty special to be able to compete at this level with your dad,” Cannon McIntosh said. “At times, it’s tough when you have bad nights on the family team. So there are tough times, but those good nights when you win races, it’s very special. It’s something you’ll always remember.”

McIntosh’s season got off to a slow start, but he turned it around with an Indiana Midget Week victory at Kokomo (Ind.) Speedway.

“It was really frustrating early on. We’ve always had a fast car, but it seemed like one thing, or another would happen,” he said. “We just didn’t seem to have any luck on our side and needed to develop more consistency. The USAC win at Kokomo was a long time coming. We had won in POWRi and had been so close in USAC, but just weren’t able to pull it off.

“Since then, the car has been really, really good. To have the success we’ve had for Crescent Tools, Toyota, Mobil 1 and everyone who’s a part of this team has been pretty awesome.”