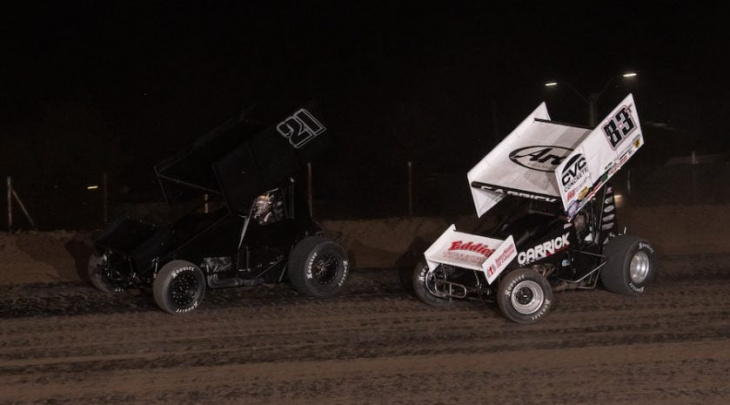 After finishing third in points with “The Greatest Show on Dirt” a few weeks ago, Macedo headed to his home state of California and has been racing on the tracks that were vital to his early development as a driver.

On Tuesday night Macedo climbed aboard the car that helped start his sprint car career, the Tarlton Motorsports No. 21, and wheeled the matte-black machine to Merced Speedway victory lane with the Kings of Thunder 360 Sprint Cars.

For Macedo, the win marked his second straight at Merced after topping the Outlaws’ visit back in March aboard the Jason Johnson Racing No. 41.

“My guys did an incredible job,” Macedo said. “Drew Warner and Shane Watts worked really hard on this thing to get it better. Last time I drove it I was a little uncomfortable, and they sure made me really comfortable tonight all night long, so hats off to them doing an incredible job.”

Tanner Carrick and Ryan Timms led the field to green with Carrick getting the jump while Timms slipped a few spots in the early laps.

Macedo jumped into the runner-up spot on the opening circuit after starting in third and immediately set his sights on Carrick. 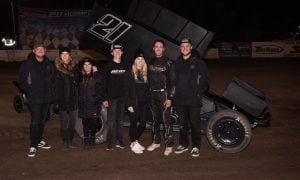 Setting a wildly fast pace, the leaders entered traffic early on and gave Macedo the opportunity he needed just a handful of laps into the race.

Carrick slipped under a slower car in turns three and four while Macedo ripped the cushion. Coming out of the corner with a huge run, Macedo spotted the smallest of gaps between Carrick and the lapped car.

The Lemoore, Calif., gasser squeezed between the two heading down the front straightaway before finishing the pass with a slider in turn one. Carrick tried to return the favor with a turn three slider, but Macedo roared around him on the outside.

From there, Macedo sliced through traffic as Carrick began to fade slightly. Chase Randall advanced into the second spot a lap after Macedo swiped the lead.

A late red flag for an incident between Colby Copeland and Justin Sanders gave the leaders a clear track and bunched them up for one final blitz to the checkered flag.

Macedo pulled ahead as the battle began for the runner-up spot. Ninth-starting Tyler Courtney began to mix it up with Randall. On the final lap heading into turn three, Courtney and Randall touched, sending Randall a little above the groove and giving “Sunshine” second.

Ahead of them, Macedo cruised to the win in the Tarlton ride and afterward made sure to offer his gratitude for them always having a car ready when he’s available.

“I want to thank Tom and Tommy Tarlton for letting me come out here and have some fun in a winged sprint car every once in a while,” Macedo said. “They build beautiful, black No. 21 racecars. They’re always a privilege to drive, and I’m always thankful to come back and run for them.”

Courtney and Randall completed the sprint car podium. Buddy Kofoid passed the most cars, advancing from 16th to seventh in the new Gorden family-owned No. 10 sprint car.