From The Archive: Hewitt’s Crowning Achievement 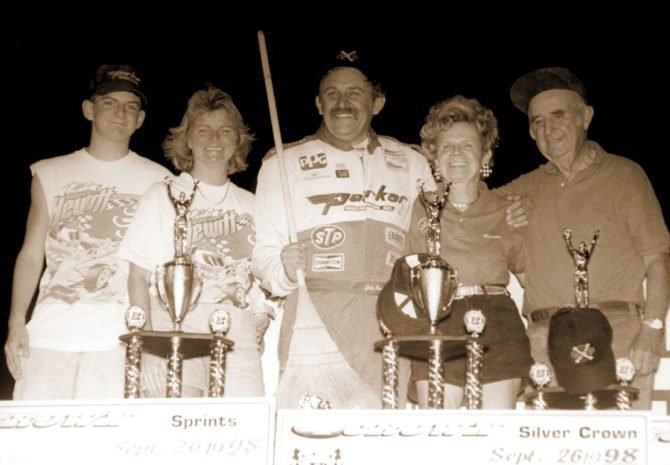 Editor’s Note: In 1998, Jack Hewitt won all four features during the 4-Crown Nationals at Ohio’s Eldora Speedway. With the 40th running of the event set for this weekend, we look back on Hewitt’s crowning achievement. The following feature was originally published in the Sept. 2013 issue of SPEED SPORT Magazine.

The story is so amazing and unlikely that it’s sometimes difficult to convince people that it really happened. But it is the absolute truth, witnessed by thousands of race fans screaming at full throat on a warm, summer-like September night in Ohio.

One man, winning four feature races in one night.

The very thought still seems so far-fetched as to be absurd. But Jack Hewitt proved otherwise.

It was Sept. 26, 1998, and the final night of the 4-Crown Nationals at Eldora Speedway. At the time the event maintained the original format — four divisions, qualifying and heats on Friday night, culminating with B mains and features on Saturday night.

For Ohio race fans two men rose above all else at Eldora. Dayton’s Larry Moore was beloved for his exploits in stock cars; Troy’s Jack Hewitt was revered for his open wheel success. By 1998 Moore made only an occasional appearance behind the wheel, leaving Hewitt to draw the cheers of the Ohio faithful.

It had been a memorable year for the 47-year-old Hewitt. He fulfilled a lifelong quest in May by qualifying for the Indianapolis 500, where he finished 12th. In July he suffered serious facial lacerations at Indianapolis Raceway Park when a steel rod penetrated his visor. With the wounds sewed shut Hewitt forged on as only Hewitt does.

Hewitt’s history at Eldora ran deep. His father Don was the man who took the inaugural laps when the track was carved out of the Ohio countryside in 1954. Jack spent countless hours racing and watching at Eldora. He developed a keen eye for what the track was doing and what the other racers were doing.

The track suited him on this Saturday night: dry and slick with a slight crown in the middle.

One year earlier Hewitt had watched Donnie Moran win the World 100 with an unusual line in which he cut across the bottom groove and slid to the outside. Intrigued, Hewitt tried that same line in the opening midget feature and found it promising, winning from the sixth row in Bob Parker’s midget.

One down, three to go.

Next was the sprint car feature where Hewitt would line up 10th in Bill Biddle’s BWB entry. Hewitt was immediately fast and he picked his way forward, slipping past series point leader Tony Elliott to take command. Behind him Dave Darland was coming fast and that spelled trouble because Darland is also strong at Eldora. But at the finish Hewitt climbed from the car in victory lane to celebrate.

The modified feature lined up with Hewitt starting fourth in John Orr’s machine. Hewitt had proven adept in the modified at Eldora and had won many races. On this night, he showed why as he bounced off the wall in fearless fashion and stormed to victory.

By this point the large crowd was fully aware of what was happening. They were sharply tuned in as the Silver Crown field lined up for the final feature of the night. Could he do it? Could Jack Hewitt sweep the 4-Crown Nationals? An electric tension swept over the place as people sensed their brush with destiny.

At this point Hewitt recalls feeling little pressure. After all, he had already done the unthinkable. Other drivers had won multiple features at the 4-Crown — Steve Kinser, Larry Rice, Ken Schrader, Rich Vogler and Tony Stewart had each won two. Nobody had won three. Hewitt and his three wins now stood alone.

Hewitt had the luxury of a front-row starting spot in the Team 6R Silver Crown entry. Every eye in the place was on No. 23 as the feature rolled off. Hewitt quickly found that the car was “perfect” and he outran fellow front-row starter Jimmy Sills to the first corner. From that point, Hewitt looked like he was on cruise control and he won comfortably.

He had done it. Four amazing victories on one amazing night.

“It’s still hard to believe that I did it,” Hewitt said recently, recalling the moment. “It was one of those times when everything just went my way and you probably only get that experience once in a lifetime. I was fortunate.”

Every great driver expects to win every race he’s in.

But did Hewitt really believe sweeping the 4-Crown was possible?

“You say you’re going to win each race and that’s your goal,” he said. “But inside you know you’re not going to win ’em all. Actually, it’s a bigger challenge than people realize just to make the show in all four races. You set the goal high and sometimes you get it.”

In the 15 years that have passed since that night, Hewitt has never once gone to a race track without someone mentioning the ’98 4-Crown.

“Everybody says they were there that night,” he laughed. “And believe it or not a lot of people say it was their first time at Eldora. They saw me win all four and figured it was an everyday thing, like people do that all the time.

“People continue to bring it up and it’s nice. It’s not a bad thing to be remembered for. A lot of people never have such a night in their lifetime and I’m glad I got to have that one.”

In the decade that followed he admitted that the longing to race has never waned. 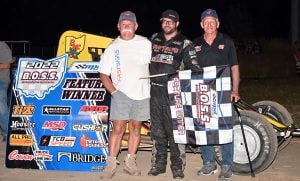 “I miss it terribly. I really do,” Hewitt said. “There are no words to explain that feeling, that wanting to go race but you can’t. If a person is a heroin addict there are things they can do to help that person; but a racer who wants to get off the racing drug, there’s no help for him. It’s a tough deal to get away from.”

But Hewitt is quick to add that he’s happy in his life today. He and wife Jody still live in Troy and he enjoys attending races at Eldora and nearby Waynesfield Raceway Park. He also spends much of his time following his other passion — bass fishing. Each winter finds him spending time in the warmer climate of Florida. He and Jody enjoy spoiling their grandson, Caden, and remain close to son Cody.

Hewitt is convinced the passing of time will make it more difficult for people to believe his sweep of the 4-Crown really happened. It is so far-fetched, he says, people will begin to think it is merely folklore.

“I mean, think about it: I can hardly believe it happened and I did it,” Hewitt continued. “So think about a young person coming on…they’re going to think the whole thing is just a story that somebody made up.”

Except for those thousands of people who witnessed it firsthand.