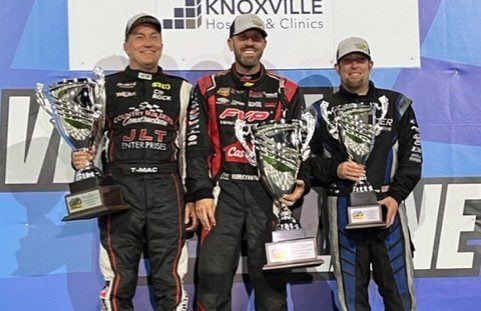 Brian Brown came into Saturday trailing Aaron Reutzel by 85 points in his quest for a fifth Knoxville Raceway 410 track championship. When the clay settled, he not only won the championship, but earned his 60th career win at Knoxville in a make-up feature, tying him for second on the all-time win list with Doug Wolfgang at the famed half-mile.

In the 360 class, Terry McCarl came in with a narrow margin in his first quest for a track title in that class. He sealed the deal with a win in that main event.

The regularly scheduled 410 main event saw pole-sitter Lynton Jeffrey ahead of Sam Hafertepe Jr., Gennetten, Brown and Austin McCarl early.  A lap in, Zach Hampton tipped over, bringing the only stoppage of the event.  Zach was o.k.

On the restart, Gennetten used the low side to shoot by both Hafertepe and Jeffrey to the point.  A lap later, Hafertepe would claim second from Jeffrey.  Brown was also on the move, overtaking Jeffrey for third on lap eight.

Gennetten had set sail, however, and entered the lappers by lap nine.  He navigated traffic with perfection, finishing more than three seconds ahead of Hafertepe, and a $1,000 bonus earned him $6,000.  Brown ($500 bonus), Jeffrey ($250 bonus) and Corey Day rounded out the top five.

“I told Chad (Morgan) and my Dad (Steve), we were going to go quick time, and we were going to win the feature tonight,” said Gennetten. “I already knew, I just had a feeling. I just have to thank my team and my sponsors. This is awesome.”

The make-up feature from July 23 for the 410s began with Ian Madsen cruising up front, ahead of Henderson, Hampton, Brown and Austin McCarl.  Hampton slowed and exited on lap two, allowing Carson McCarl to enter the top five.

Brown passed Henderson for second on lap three. On the fifth lap, Madsen’s run up front came to an end with suspension issues. The restart saw Brown inherit the lead ahead of Henderson, Austin McCarl, Carson McCarl and Jeffrey.  Jeffrey moved up to fourth and Reutzel entered the top five.

Henderson was the next to have issues, and he bowed out of the second spot on lap nine. Jeffrey disposed of Austin McCarl at the halfway point to claim second. Brown entered lapped traffic on lap 12, but Jeffrey was closing rapidly before the caution flew with nine to go for a spun Chris Martin.

The lead five stayed the same, but many eyes were drawn to Day, who was making another charge.  The youngster from California climbed from row nine to fifth by lap 13.  Austin McCarl moved back by Jeffrey for second with six to go, while Reutzel also challenged the veteran, passing him for third on lap 15.

Brown would go on for his historic win worth $5,000.  Austin McCarl claimed second, ahead of Reutzel, Jeffrey and the hard-charger Day

“That guy was my hero,” said Brown of tying Doug Wolfgang on the all-time win list. “All of those guys…it really probably hasn’t sunk in who we’ve passed the last couple of years. I dreamed of racing here one day and just wanted to be a part of (uncle) Danny’s (Lasoski) wins. To be second all-time for now to him, is pretty special.  Danny was quick to remind me, I’m only (52) wins behind him.  I know this probably means a lot to my grandpa (George).  Being second to Danny is an honor.  I’m proud of this team.  We didn’t plan to run for the point championship.  We missed two races, but we ran good enough the other times to put us in a good spot.  We had the point lead going into the Capitani Classic. I just messed up and screwed things up for our team.  We knew we had a good opportunity tonight and we were good enough to win.”

Terry McCarl came into the 360 main event just 21 points ahead of Clint Garner in the title race, but he left little doubt as he took off from the pole position in the 20-lapper ahead of Ryan Giles, Scott Bogucki, Jamie Ball and Kaleb Johnson.

Bogucki passed Giles for second on lap three, but Giles returned the favor the following lap.  The battle allowed McCarl to increase his advantage, and he was into lapped traffic by the seventh circuit.

Chase Randall was on the move as well, taking fourth from Ball on lap nine, and riding the cushion by Giles for third on lap 11.  Austin Miller spun with eight to go, bunching the field.  Giles reclaimed the show position when green fell again, but Randall proved tough, shooting from fourth to second.

Unfortunately, the move was negated when Ball and Garner got together, sending the former upside down, and the latter pitside with a broken front end.  No one was injured.  McCarl had sealed his title at that point, and led Bogucki, Giles, Randall and Johnson back to green.

Giles again made a solid move on the low side to gain second before Alan Zoutte spun with six laps to go.  That negated another pass that Randall had made.   When Timothy Smith stopped with four to go, it marked the final caution of the race.

McCarl pulled away for his 13th career 360 win here, and with a $750 bonus, took home $2,750 with his championship. Randall claimed third on the restart and then took second from Giles coming for the white flag.  His bid for the win came about a car length short, but he earned a bonus $375 to add to his earnings.  Giles ($190 bonus) followed in third, Bogucki was fourth and Johnson fifth.

“I wanted this for Don Long and (engine builder) Jaymie Moyle,” said McCarl.  “Clint (Garner) and Matt and his dad are in the top four or five teams in the pits regardless of class.  We look like a big money team, but we’re not.  We just work our tails off at this thing.”

Bridger never wavered after starting on the pole of the 18-lap Pro Sprints main event. Mike Mayberry was in tow, and entered the feature with just a ten point lead on Tyler Groenendyk.  Josh Jones grabbed third early from Brandon Worthington, and Kade Higday had moved into fourth by lap three.

Groenendyk started outside row four when the point invert of eight was drawn.  He gained fifth by lap seven, fourth by lap eight, and moved into third at the halfway point.  Bridger and Mayberry were in their own zip code by lap twelve when lapped traffic became a factor.  All of that changed when Ryan Navritil spun with six to go.  Scotty Johnson’s seventh place run also came to a close at this point.

Bridger was never seriously challenged down the stretch (earning a $500 bonus and $1,150 total), and Mayberry sealed his title with a second-place run ($250 bonus).  Higday ($125 bonus) moved into third late, ahead of Worthington and Groenendyk.

“This is a dream come true,” said Mayberry.