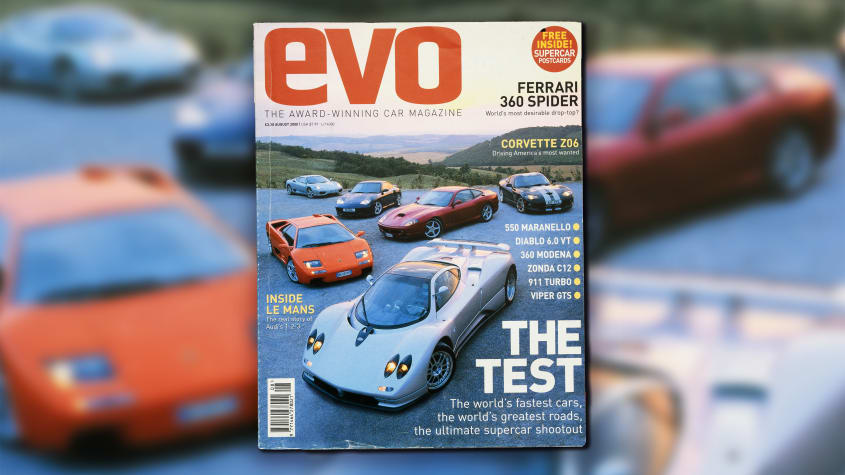 ‘The Test. Best headline ever,’ says Peter Tomalin, mockingly ‘What the hell were we thinking?! The Magazine. The Car. I suppose it depends how you say it: THE TEST or the test.’

It’s never really occurred to me before, because when I bought issue 022 back in 2000, the headline’s bold, simple declaration seemed to make sense. It was definitive. A line in the gravel trap. I couldn’t wait to read it, and it really was quite a read – 28 pages of the magazine being given over to six supercars: Diablo 6.0 VT, 550 Maranello, 360 Modena, 996 Turbo, Viper GTS and Zonda C12.

‘The line-up of cars is perhaps fairly ho-hum looking back,’ says Tomalin (evo’s associate editor at the time), ‘but I think we’re spoiled now with the sheer number of supercars that are available. A new McLaren every month. But at that point in time these really were rare and the cream of the crop.’

And it was a huge test for evo magazine, which was still something of a newcomer in the market at that point, having been around for less than two years. ‘Everything was still fresh and exciting,’ Peter recalls. ‘We were still getting to know each other in a way. This was also the first time we had been out to Harry Metcalfe’s place – the almost mythical villa that he owned in Tuscany. To get out there and discover that it was everything you could hope for in a location, with the beautiful scenery, the light that was perfect for photography and the food that was a significant step up from the usual tube of Pringles and a curly service station sandwich… it was magical.’

It’s fascinating looking back at the test and how the cars were perceived in their pomp. In 2000 the 911 Turbo was still settling into its new, sensible supercar persona and its discreetness was perhaps a bit of a disappointment. At the other end of the scale, the Viper was encapsulated in this description of shifting gear: ‘The gearknob is almost baseball-size – it’s a bit like pulling the lever on a one-arm bandit. You just hope you get two plums when the reels stop.’ Meanwhile the Diablo was clearly converting people to the idea of Audi involvement and the Pagani was still just so fresh. ‘Nobody else had really got into it at that point,’ recalls Tomalin, who at the time described it as ‘a Group C racer crossed with a Fabergé egg’, before going on to paint a picture of John Barker emerging from the Zonda for the first time ‘with the expression of a man who’s just tasted a completely new flavour and found it very much to his liking’.

‘The Pagani probably should have won,’ says Peter, ‘but there was a problem with the gearbox, which was quite heavy and stiff, and I think a few of us still had reservations about the bought-in Mercedes engine.’ An engine that in the original C12 was putting out just 389bhp and delivered a positively yawn-inducing 0-60mph time of 4.5sec.

However, as much as I loved hearing about the cars, I also remember being captivated by the broader picture painted by Peter. It felt like there was no ‘behind the scenes’ because you were being welcomed wholesale into this very exclusive event. There was humour and nobody was beyond a bit of ribbing: ‘Harry is metamorphosing into his alter ego, the hard-driving Italian count Arri Vederci.’

‘I needed to include the colour, the characters and the chatter because I’m not a hard-edged road tester,’ says Tomalin, modestly. ‘Although some of the later eCotys would be more like small novels, this was probably the longest story I’d written at that point. And while you don’t like to say it wrote itself, because of course you sweat over it terribly, this feature came more easily than most. Clearly struggled with that headline, though…’