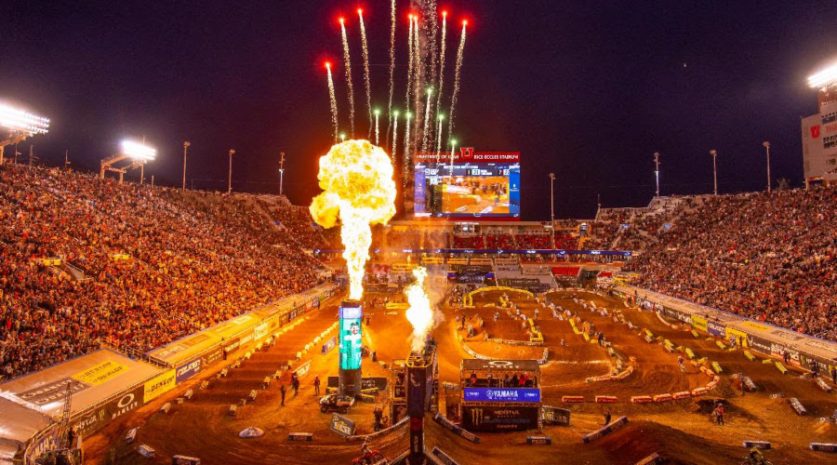 When the gate dropped for the final race of the 2022 season, Twisted Tea Suzuki’s Justin Bogle grabbed the holeshot ahead of 2021 champion Red Bull KTM’s Cooper Webb, Anderson, and Sexton. Anderson charged early, getting past Webb before the first lap was complete then taking over the lead less than two minutes into the 20-minute plus one lap main event. Sexton was quickly into second and the two front runners steadily distanced themselves from the pack. But there was plenty of action behind them.

Third place overall for the season was on the line with only eight points separating Rockstar Energy Husqvarna Factory Racing’s Malcolm Stewart, Barcia, and Red Bull KTM’s Marvin Musquin. Less than four minutes into the race, Barcia moved into third place with Webb in fourth, Stewart in fifth, and Musquin in sixth. Stewart was the rider on the move, battling past Webb then getting around Barcia just before the race’s halfway point. Just a few corners later the stadium erupted when Barcia dove across the inside of a 180 degree bowl turn and made hard contact on Stewart. Stewart popped off his bike as if it had vanished beneath him. The Husqvarna rider was quickly back up and charging to regain positions.

The crowd saw the potential for an incredible battle. As Stewart made his way forward the entire stadium was screaming. Stewart was up to Barcia’s rear fender as the clock ticked past zero. On the final lap, a lapped rider briefly held up Stewart and the last-lap clash never took place.

At the checkered flag, Anderson grabbed his fourth win in a row, earning his seventh victory in 2022. Sexton was close but not within striking distance of a win and capped the season with a second place finish. Barcia grabbed the last podium spot of the year to the sounds of a crowd that did not approve of the pass that got him there. On the podium Barcia owned the move and reminded the crowd that a season podium position was on the line in the high-pressure sport that awards handsome bonus money to top finishes. As it was, Stewart’s fourth place finish was enough to earn him that third season-overall spot, and bonus, for the year.

The 2022 450SX class season concluded with Monster Energy Yamaha Star Racing’s Eli Tomac, who was out healing an injury at the final race, taking his second premier class title. Jason Anderson finished second on the season with seven wins, eclipsing his 4-win 2018 Championship year. And, in the tightly-contested battle, Stewart grabbed third overall in the 2022 Monster Energy AMA Supercross Championship. 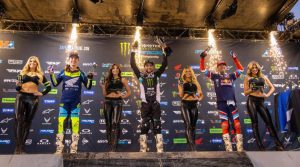 The 250SX class racing in Utah was equally intense. The class’ final race put both regional divisions on the track together in the second of two Dave Coombs Sr. East/West Showdowns in 2022. With the title on the line, Craig pulled the holeshot but Team Honda HRC’s Hunter Lawrence was quickly past and at the front. Lawrence needed a win and needed Craig to finish 15th or worse to take the title. The surprise came when Nate Thrasher began to apply pressure on Craig for second place early in the race. Thrasher took the spot and within about one lap was also past Lawrence and in the lead. The top three held steady until Craig crashed in the corner after the whoops. Craig was quickly back up and rode a conservative ride to eighth to secure the title. Thrasher took the evening with a strong win ahead of Lawrence and Utah racer Troy Lee Designs Red Bull GASGAS Factory Racing’s Pierce Brown.

Paasch Goes Back To Back In Daytona 200

Tomac Counts To Six At Daytona

Anderson Gets No. 3 In Minneapolis

All AFT Classes To Compete At Springfield Mile Races

AUSTIN, Texas — Enea Bastianini (Gresini Racing MotoGP) is now a two-time MotoGP race winner. Bastianini rode to a commanding victory in the Red Bull Grand Prix of The Americas at Circuit of The Americas and regained the point lead in the process. Jack Miller grabbed the holeshot at ...

ST LOUIS, Mo. – In a return to the top step of the podium, Red Bull KTM’s Marvin Musquin was brilliant inside The Dome at America’s Center to take the victory at Round 13 of the 2022 Monster Energy AMA Supercross series. The Triple Crown race format, the third ...

Marc Marquez will return to the MotoGP World Championship in Austin aboard his Repsol Honda Team RC213V after getting clearance from his medical team. Doctors have cleared Marc Marquez for a return to Grand Prix competition after his fall in warm up at the Indonesian Grand Prix and subsequent ...

SANTIAGO DEL ESTERO, Argentina — It was a day of MotoGP firsts in Sunday’s Argentine Grand Prix. Aleix Espargaro rode to his first MotoGP triumph and in so doing gave Aprilia its first victory in the MotoGP era. Espargaro started his 200th MotoGP race from the pole, but gave ...

MADRID, Spain – Marc Marquez was declared unfit for the Indonesian Grand Prix held at the Mandalika circuit after suffering a high side at Turn 7 during Warm Up prior to the race. The Repsol Honda Team rider experienced another episode of diplopia as a result of the heavy ...

Multi-time world champion Marc Marquez will miss this weekend’s Grand Prix of Argentina while he continues to recover from diplopia. The Repsol Honda Team rider has shown very favorable improvements with his diplopia after visiting the Hospital Clínic and an examination from Dr. Sánchez Dalmau. Marquez visited his ophthalmologist, ...

Cianciarulo Out For Supercross Season

Sexton Breaks Through In San Diego