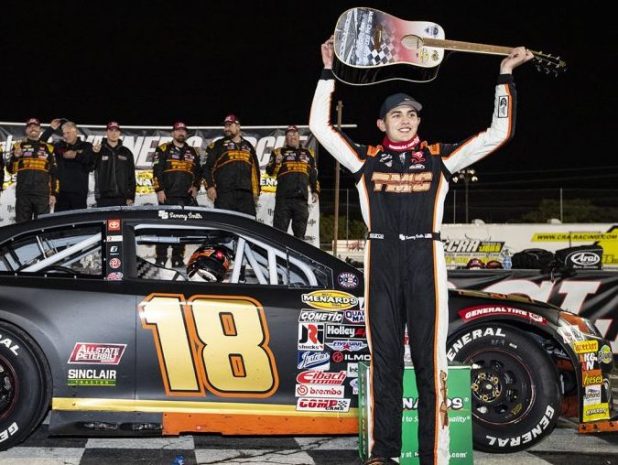 The victory was his third in four races in East Series competition this season and his second-straight at the historic Nashville oval. It also allowed him to strengthen his lead in the standings to nine points ahead of title rival Taylor Gray.

Smith started second and chased 17-year-old Jake Finch for the first 44 laps of the race. Finch took the lead at the start of the race after earning his first pole earlier in the day.

The pass for the lead came on the 45th circuit when Smith moved to Finch’s inside to take the lead at the start/finish line. Once out front, Smith was never seriously challenged. He led the rest of the way, ultimately getting to the checkered flag 8.333 seconds clear of Finch.

“We kind of struggled there to get by the 1 car (Finch) early,” Smith explained in Victory Lane. “Just couldn’t get clean air, but once we got out front our car was really good and here we are.”

Finch worked his way past Taylor Gray with 13 laps left to finish second, his best finish in three East Series starts so far this season.

DARLINGTON, S.C. — Aric Almirola will make his 400th NASCAR Cup Series start Sunday night at Darlington Raceway, and this one will mean a lot more than most of them. Almirola’s No. 10 Stewart Haas Racing will carry a throwback paint scheme that recognizes his grandfather, legendary Florida sprint ...

STATESVILLE, N.C. – Petty GMS Motorsports has added Ferris Mowers, a leading commercial and industrial turf care equipment provider, as a sponsor during the NASCAR Cup Series season.  Ferris, a brand of Briggs & Stratton, will serve as the primary partner of Ty Dillon and the No. 42 Chevrolet ...

CONCORD, N.C. – William Byron will be behind the wheel of the No. 24 Chevrolet Camaro ZL1 through the end of the 2025 NASCAR Cup Series season, after signing a new three-year contract with Hendrick Motorsports.  Through the first 11 races, Byron is tied for third in the Cup ...

STATESVILLE, N.C. – As the NASCAR Cup Series embarks on its traditional Throwback Weekend at Darlington (S.C.) Raceway, Petty GMS will pay tribute to Lee and Richard Petty by throwing back to the inaugural Daytona 500 in 1959. Ty Dillon will honor the patriarch of the Petty family, Lee, ...

STATESVILLE, N.C. – Myatt Snider will pilot a throwback Ken Schrader paint scheme in the NASCAR Xfinity Series at Darlington (S.C) Raceway this weekend. Snider’s No. 31 Capital City Towing Chevrolet Camaro SS will be a throwback to Ken Schrader’s Junie Donlavey-owned No. 90 that qualified on the pole for ...

The NASCAR Cup race at Dover Motor Speedway is currently under a red flag due to rain. Seventy-eight of 400 laps have been completed. The yellow flag was put out on Lap 68 for rain. After multiple laps trying to wait it out, a large chunk of the field ...

Next Gen Car At Dover Could Be ‘Eye Opening’

Xfinity Qualifying At Darlington Rained Out

Joey Logano On Pole For Goodyear 400

Wendy’s To Back Beard & Gragson At Talladega

Joey Logano On Pole For Truck Race On Bristol Dirt

On Bristol Dirt, You Just ‘Have To Go With It’

Chase Elliott To Pilot Spire No. 7 Truck At Bristol

Justin Allgaier To Drive Spire No. 77 For Bristol Dirt Race