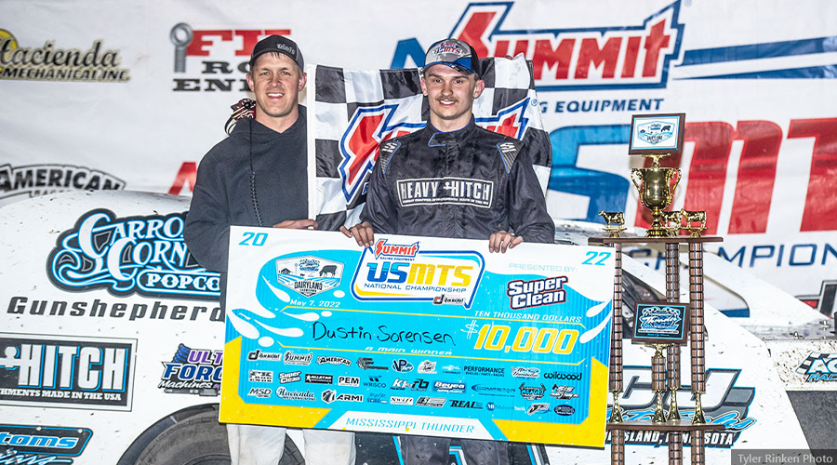 FOUNTAIN CITY, Wis. — Dustin Sorensen won Saturday night’s finale of the 2nd Annual Dairyland Showdown presented by Dynamic Concrete Resurfacing at Mississippi Thunder Speedway.At 21 years of age, Sorensen added $10,000 to his bank account with the impressive victory, and padded his points lead in the Summit USMTS National Championship presented by RacinDirt.The three-day event saw three drivers with an average age of 23 years old cross the Mississippi River and take home the top prize back to their home state of Minnesota.A second-generation racer from Rochester, Sorensen started seventh in Saturday’s 50-lap main event at the high-banked one-third-mile clay oval. He remained close to the leaders for the first half of the race and then took the lead for good on lap 40.Cory Crapser earned the pole and paced the first 20 laps of the race before giving way to Shane Sabraski in the Hot Karl Chassis entry.Lucas Schott, who won Thursday and finished third on Friday, reeled in Sabraski midway through the contest and took over on lap 30. However, Sabraski fought back to regain the top spot four laps later.With the only caution flag waving early in the race, the leaders remained in striking distance of each other throughout the race as they tried to navigate constant lapped traffic in the 32-car starting field.Once Sorensen was able to sneak by Sabraski on lap 40, he never relinquished the lead. Sorenson had to fend off a furious challenge over the final mile from Grant Junghans and USMTS Rookie of the Year contender Cayden Carter, who clawed his way froward from 13th on the starting grid.Sabraski held on the third behind Sorensen and Carter while Schott and two-time USMTS National Champion Ryan Gustin were fourth and fifth.
Sorensen’s margin of victory was less than a half-second, and it was his eighth career USMTS win, tying him with Brandon Davis, Ryan Ruter, Ricky Thornton Jr. and Tommy Weder Jr. on the all-time list.

There’s No Stopping Looney In MLRA

World Of Outlaws Late Models Take On The Bristol Bash

Roberson Tops Battle Of The Bay

Laney Takes Round Two Of Clash

SOMERSET, Ky. – The Valvoline Iron-Man Late Model Southern Series has rescheduled their trip to Duck River Raceway Park (Lewisburg, Tenn.) to November 3-5.  The Deep Fried 75 was originally scheduled for October 27-29, but conflicting dates with the All-American 400 at Fairgrounds Speedway in Nashville prompted the change. ...

HANFORD, Calif. — The third year of IMCA Speedweeks in California opened at Keller Auto Speedway, as Bobby Hogge IV won the first of six races in the series.    Hogge IV took the lead on the start from his outside front row redraw spot, and dominated the main event ...

TULARE, Calif. — The Central Valley IMCA Clash held round three at Tulare Thunderbowl Raceway on Wednesday night, with 56 cars on hand for the three divisions.   Cody Laney matched Tuesday’s performance by redrawing the front row and leading all 25 laps with only minor pressure.   Bobby Hogge ...

BRISTOL, Tenn. — Ricky Weiss’ confidence never wavered Saturday at Bristol Motor Speedway.  After Chris Madden thundered past him for the lead in the World of Outlaws CASE Construction Equipment Late Models feature, he knew he had to find an extra gear.  Weiss found that gear in his Sniper ...

Davenport Holds Off Larson At Bristol

Davenport Drives Away At Brownstown

Five Teams Compete for Lucas LM Rookie Of The Year

Davenport Does It In Wisconsin

WoO LMS Notes: On To Wisconsin

Xtreme Dirtcar Series By The Numbers

All Stars Heading To Williams Grove For Tommy Classic

It’s All Scott In Heartland Hustle

Garrett Alberson Tops Will McGary Tribute At I-30 Speedway

Thunder On The 1000 Islands At Can-Am Postponed

Illini 100 On Tap For World Of Outlaws Late Models