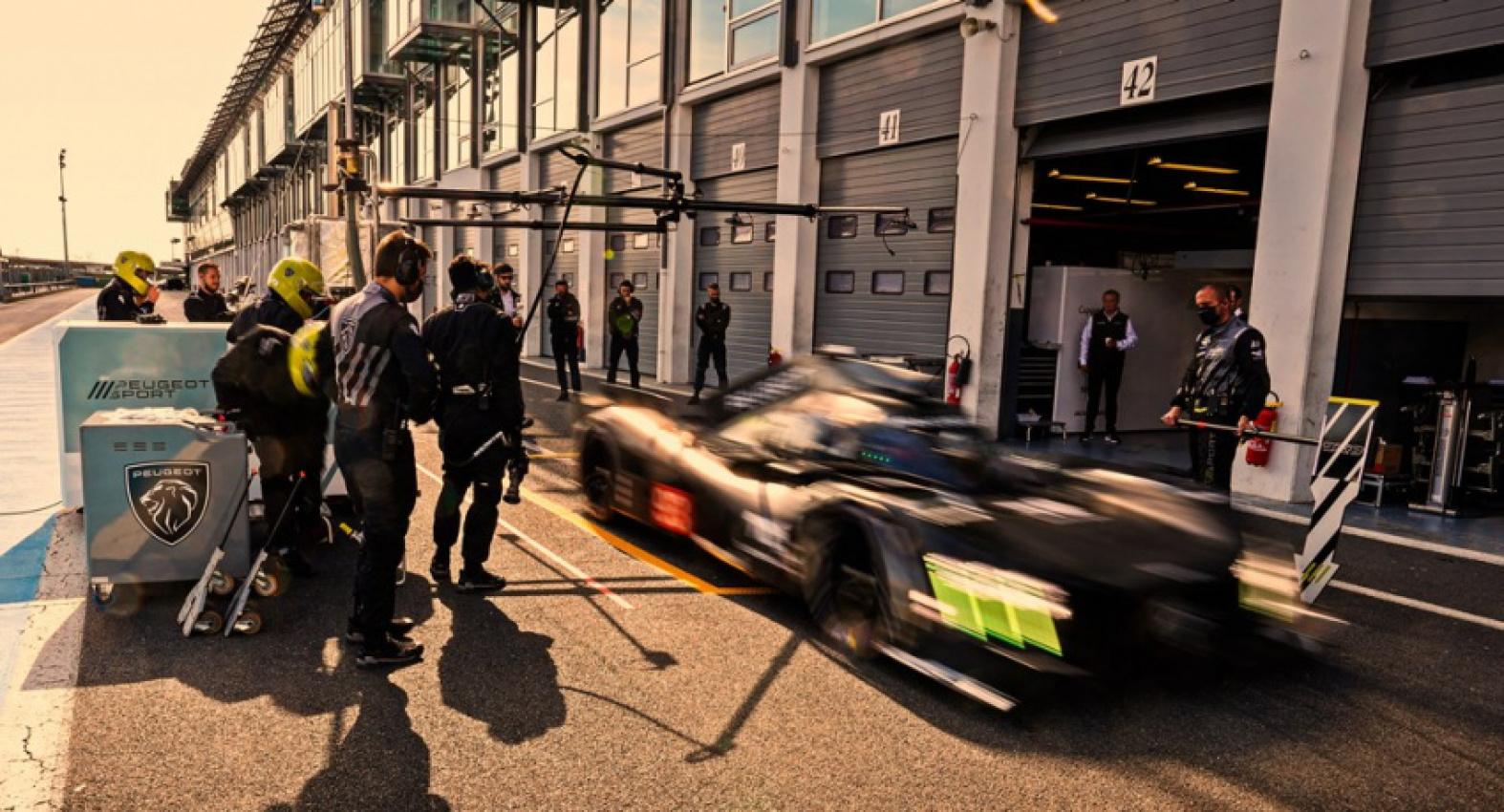 Last year, when Peugeot Sport announced its new program to develop the 9X8 hypercar for endurance racing, it expected to join the World Endurance Championship in 2022. However, the team decided to forego the first two rounds, at Sebring and this weekend at Spa-Francorchamps, and was planning to debut at the classic Le Mans 24-Hour race in June. However, because it has not participated in the first two rounds, the organisers have said it cannot take part in Le Mans.

Accepting the ruling in a positive way, Peugeot Sport’s Technical Director of the WEC programme, Olivier Jansonnie, said that this would give them team additional time to achieve the necessary level of reliability. “Both operationally and from a reliability perspective, Le Mans is the most difficult race on the calendar. Our planning will enable us to put the full weight of our teams and resources behind our own test sessions, without the disruption of racing at Spa-Francorchamps and Le Mans. We will begin with some shorter races, which will allow us to progressively get up to speed in the championship. Like with our road-going cars when we have to choose between meeting a deadline or focussing on quality, we always prioritise quality,” he explained. 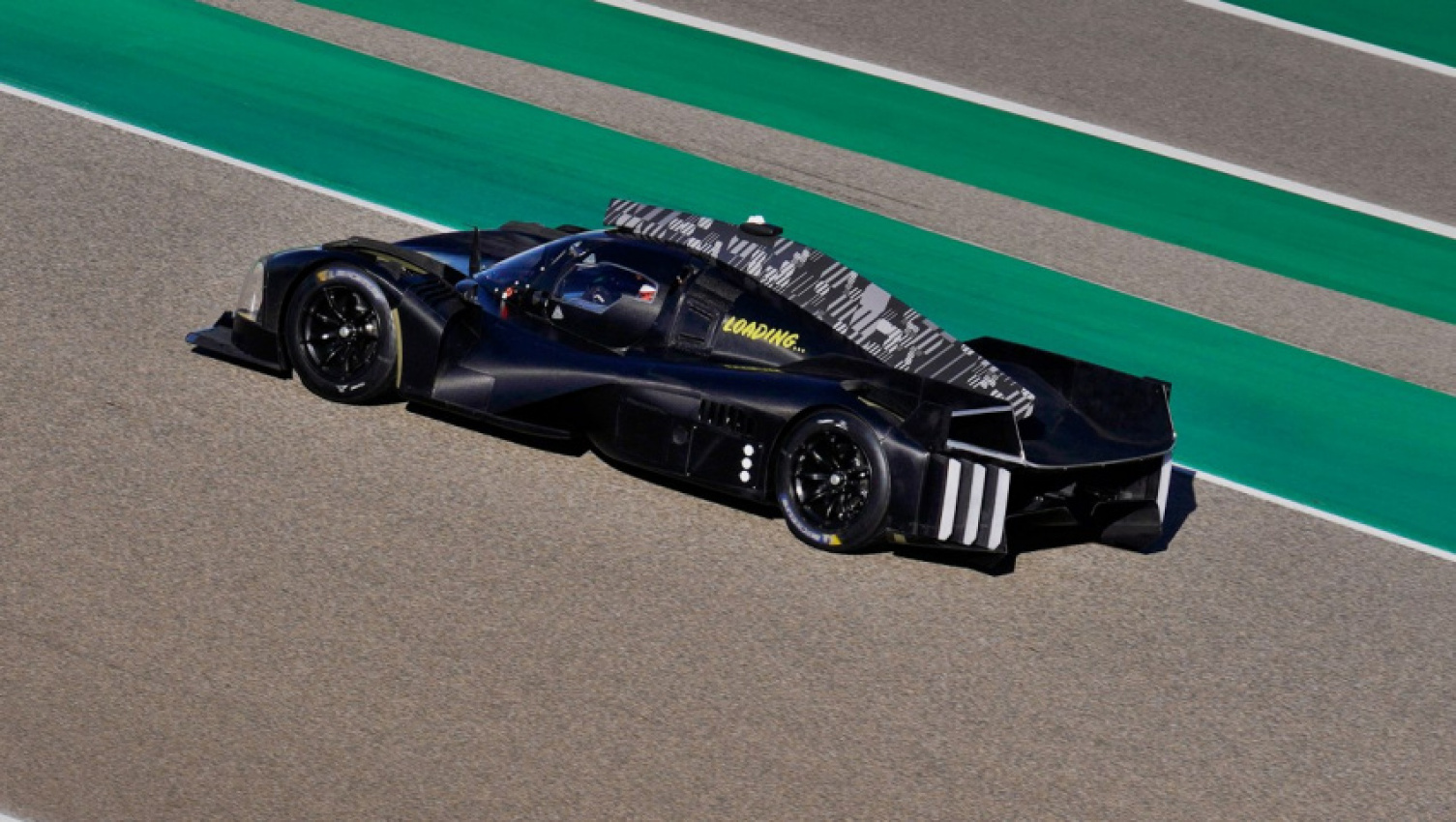 The homologation process
Before a car can enter competition, it must be homologated by the racing authorities. In the case of the new hypercar class, once homologation has been done, the design cannot be modified further until 2025 (except in very particular circumstances governed by strict conditions). Any such modifications will be counted as ‘EVO jokers’, which are limited to just five between 2021 and 2025 – aside from specific force majeure situations such as, for example, when the car’s safety or reliability is compromised.

“Restricting development in this way is important, since it would not be possible to adjust the performance of a car that is subject to constant technical updates through ‘Balance Of Performance’ (BoP) tweaks,” said Jansonnie. ”The homologation process itself consists of a series of milestones. Its schedule and execution are very precisely defined. The process concludes with the submission of a homologation file – describing in minute detail all of the vehicle’s components (with photos and weight measurements) – as well as a wind tunnel test of its aerodynamics and an inspection of the vehicle by the FIA/ACO. After this, its development is ‘frozen’. Its performance parameters are subsequently assessed in order to be able to adjust its power, weight and minimum speed of hybrid energy deployment, which are the key factors in Balance Of Performance.” 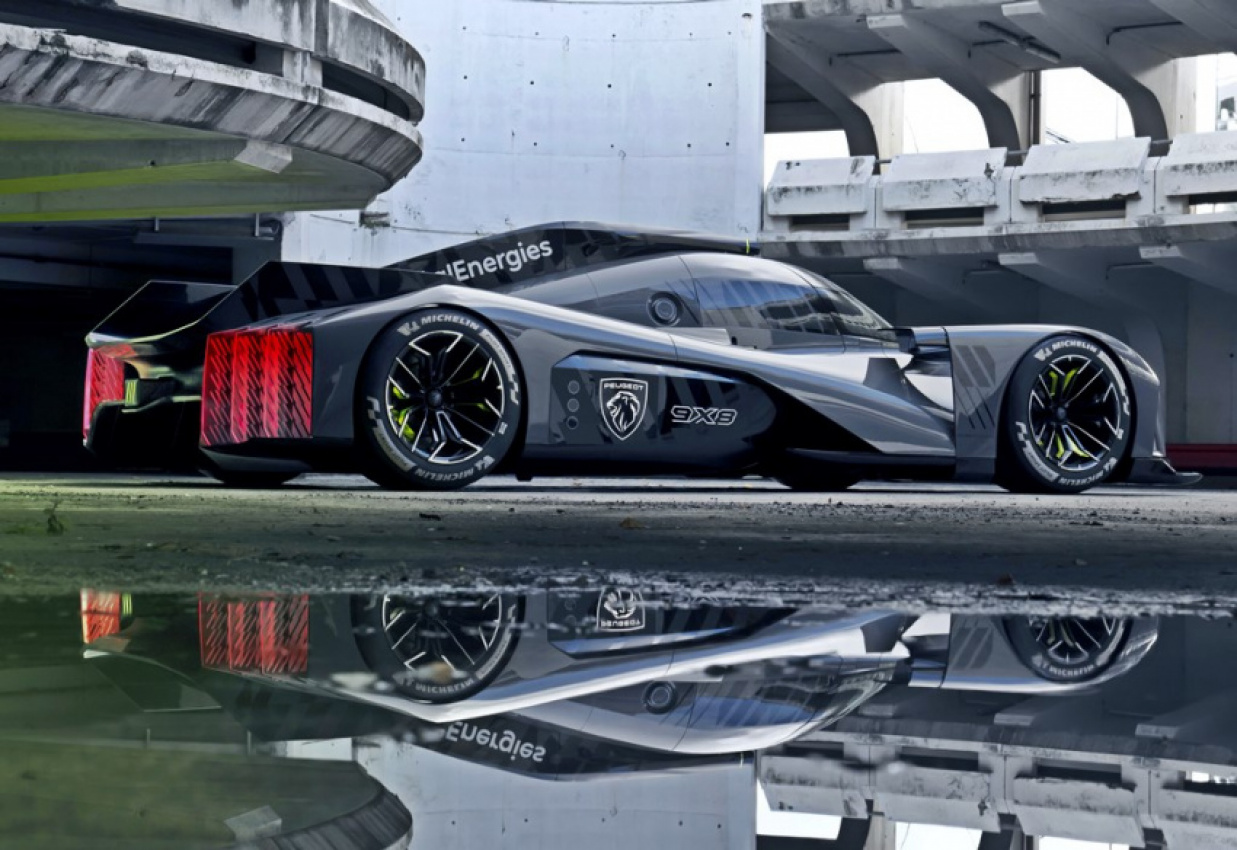 Peugeot Sport therefore has a little bit more time before it submits the 9X8 for homologation. A manufacturer judges that its car is ready to be homologated when it believes it has attained the required level of performance and reliability to be eligible for ‘Balance Of Performance’ evaluation. “That means it has the same theoretical chance of winning in the WEC and at the Le Mans 24 Hours as any of its competitors. It accepts from this point that its vehicle will not be able to undergo any further major technical changes until the end of the homologation cycle,” explained Jansonnie.

Initial existence in digital world
Prior to taking to the track for its pre-homologation test sessions, the 9X8 began life as a 51.1GB digital project, made up of 15,267 files stored on a hard drive. Digital advances have opened up a whole new realm of possibilities in motorsport, enabling Peugeot Sport’s engineers to visualise a truly disruptive concept for the new Hypercar – and validate it before manufacturing so much as a single physical component. 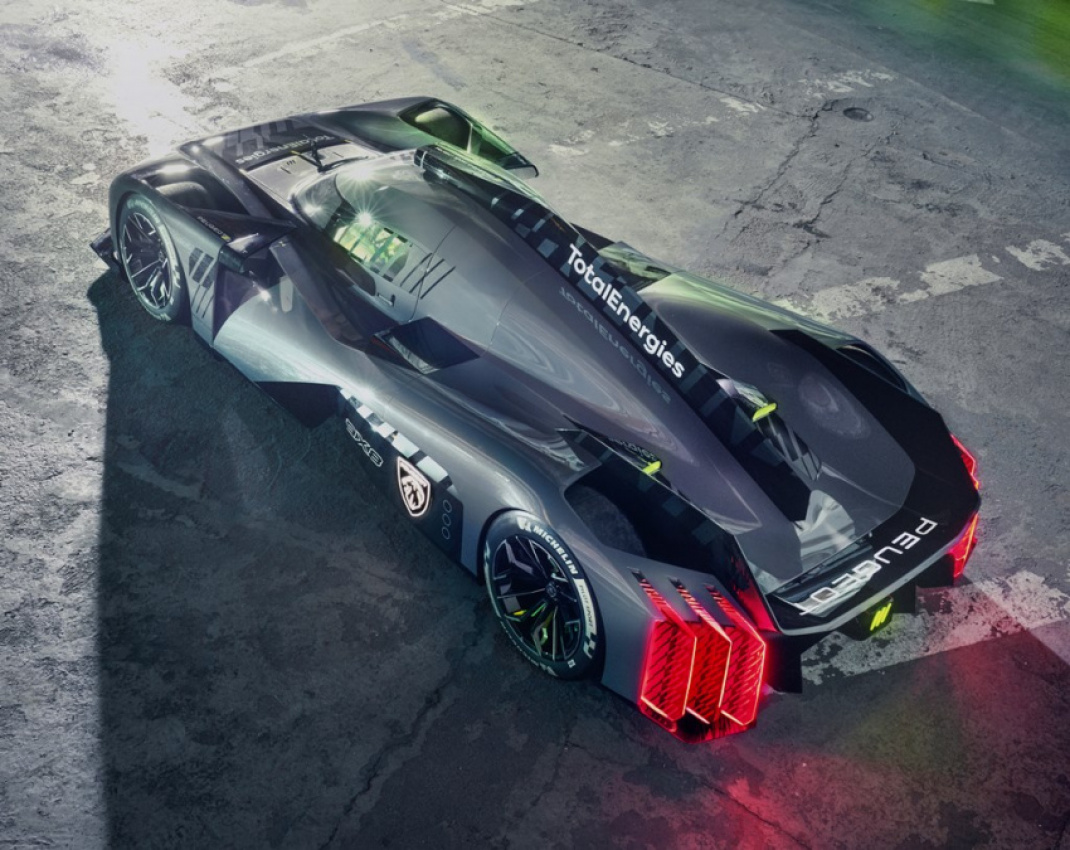 The sophistication of modern-day digital software makes it possible to conduct in-depth technological studies while saving significant time, money and resources, and the 9X8 lived an entirely ‘virtual existence’ for some time before finally turning its first wheel on-track. Peugeot Sport’s teams spent two years modelling and simulating it, utilising both existing software – adapted where necessary to suit the project’s specific requirements – as well as computer programs developed entirely in-house from scratch.

“Thanks to all of our software, we can envisage a wide range of dimensions, shapes and materials, and work on the weight of the car in-line with the technical regulations,” said Francois Coudrain, Powertrain Director of the WEC programme. “As with the choice of base concept, being able to take a purely digital approach to trialling systems and components allows us to assess a large number of potential solutions, which would quite simply be impossible to achieve in the real world.”

Digital simulations also allow for customisation where necessary – for example, what material to use around the exhaust outlets. Here, the heat levels are very high, and simulations revealed that the carbon bodywork needed to be either protected or even replaced by aluminium or titanium. Initially highlighted for attention in the design brief, this was corroborated during the simulation phase and then again in the first real-life test session. 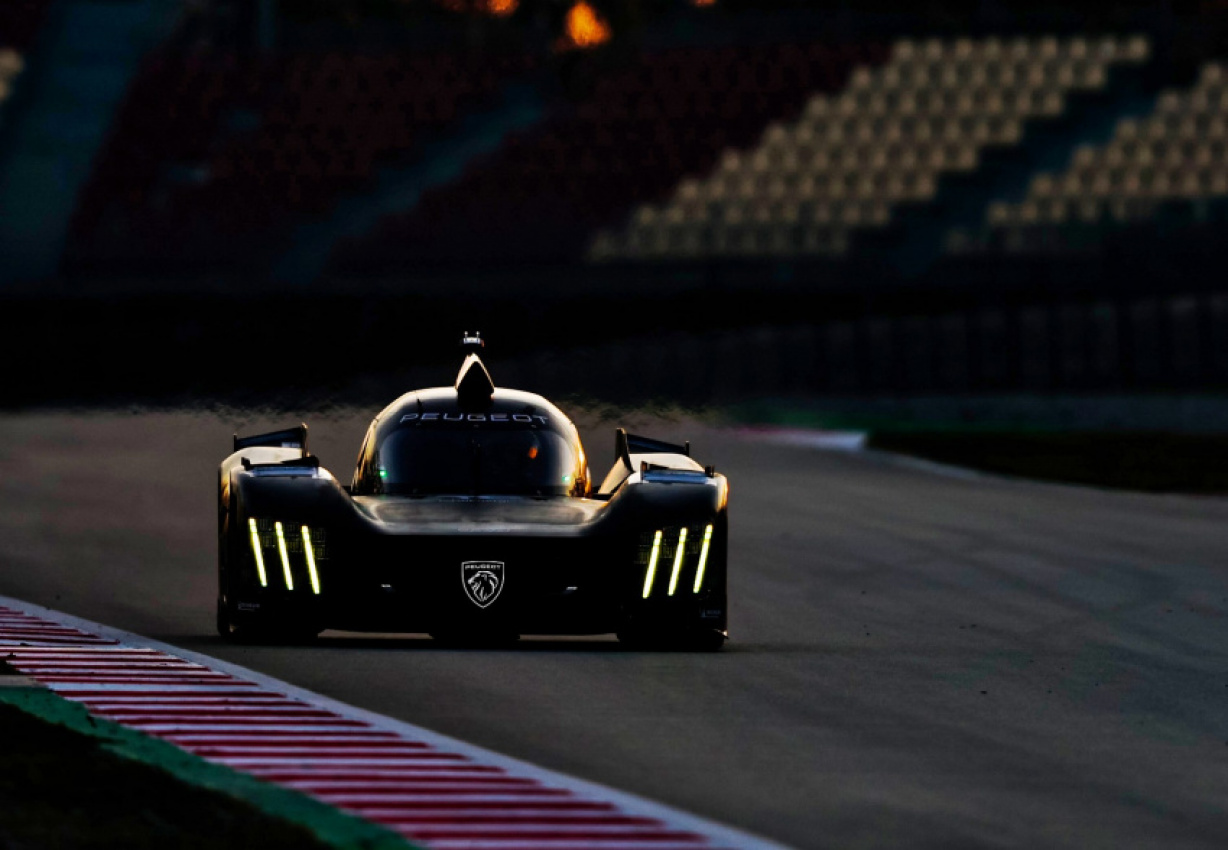 From hard drive to racetrack
Following its digital development, the hard drive containing all the technical data of the Peugeot 9X8 provided the basis for the creation of an initial 1:1 scale model for wind tunnel use and, subsequently, a physical race car, whose ongoing development is taking place on the track.

‘9X8’, the designation, is derived from a combination of the brand’s motorsport heritage and vision for the future. The ‘9’ continues the series used by Peugeot on its previous endurance racing cars. The ‘X’ refers to the all-wheel drive technology and hybrid powertrain. The ‘8’ is common across all of Peugeot’s current models – from the 208 and 2008 to the 308, 3008, 508 and 5008.

No rear wing
Unique to the hypercar’s design is the absence of a rear wing – an aerodynamic feature that has long been thought necessary for racing cars. Rear wings were first seen at the 1967 Le Mans 24 Hours on the Chaparral 2F but now, after half a century, the necessity is questioned and the 9X8 has been designed without a rear wing. 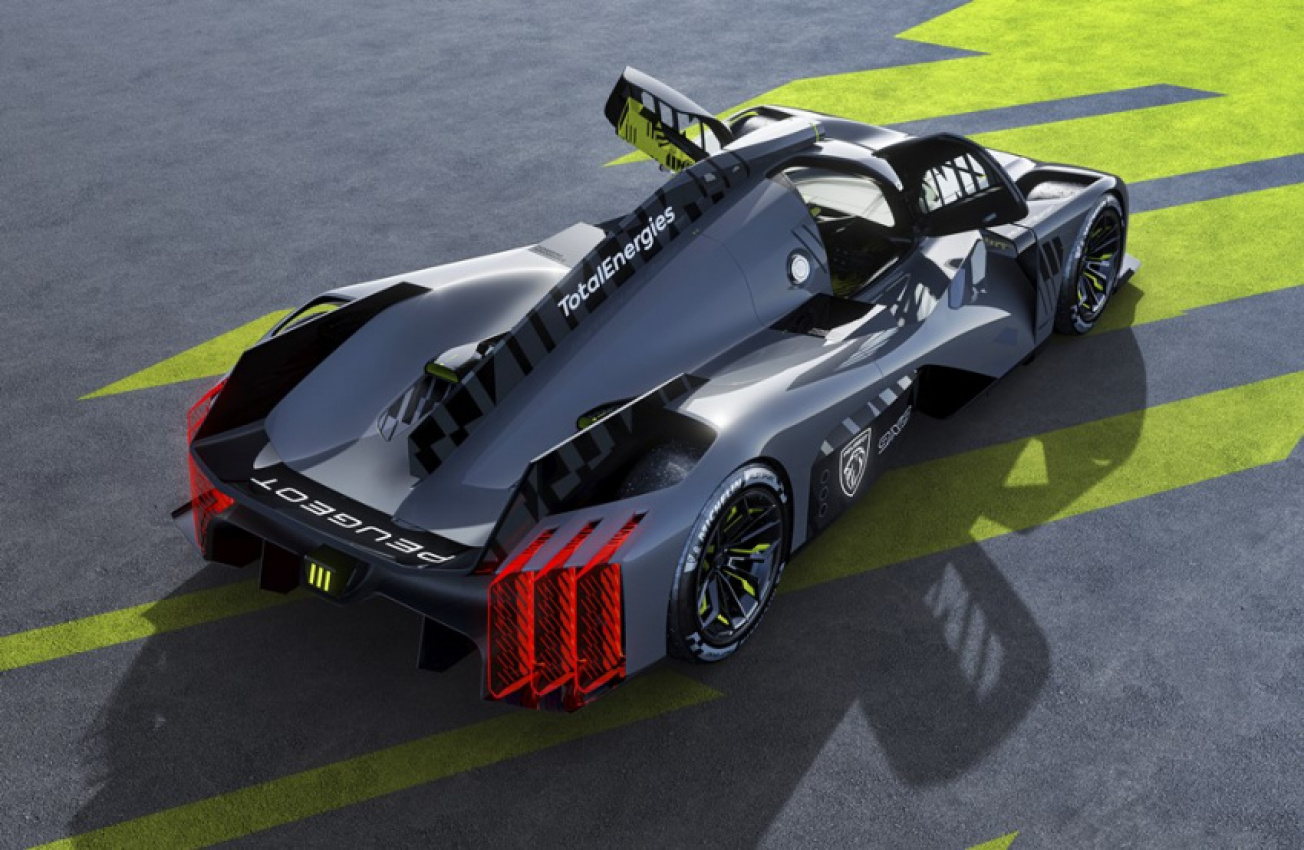 “The absence of a rear wing on the Peugeot 9X8 is a major innovative step. We have achieved a degree of aerodynamic efficiency that allows us to do away with this feature. Don’t ask how, though! We have every intention of keeping that a secret as long as we possibly can!” said Jean-Marc Finot, Senior Vice-President of Stellantis Motorsport (Peugeot is part of the Stellantis Group).

The battery pack is located in a carbonfibre casing inside the car’s monocoque structure, behind the driver and underneath the fuel tank. It has been designed to combine durability with consistent performance during races of durations of up to 24 hours, and even beyond.

Although the system output is over 500 kW, the regulations set a maximum power output of just 500 kW during races. The regulations also forbid the use of electrical energy below 120 km/h, so the motor generator unit only engages once this speed has been reached. The car must pull away from standstill under the power of its internal combustion engine alone. 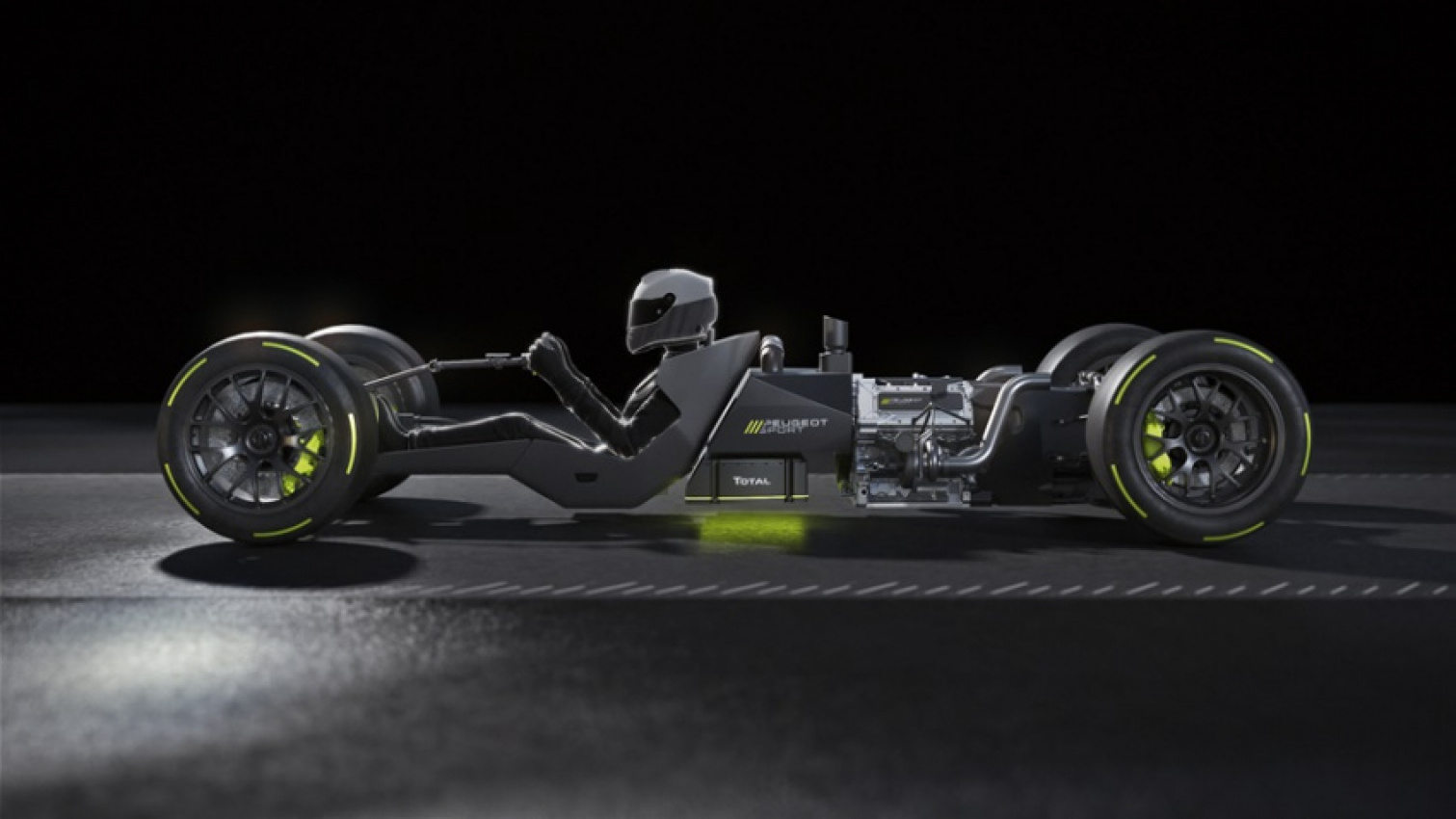 When the battery pack is empty, the engine reverts to 500 kW power output and the drivetrain reverts to rear-wheel drive. During races, the battery will be fully charged prior to the start by means of a mains-connected plug-in hybrid charger. Once on the track, the battery will function completely independently and be charged only by the kinetic braking energy recovery system. 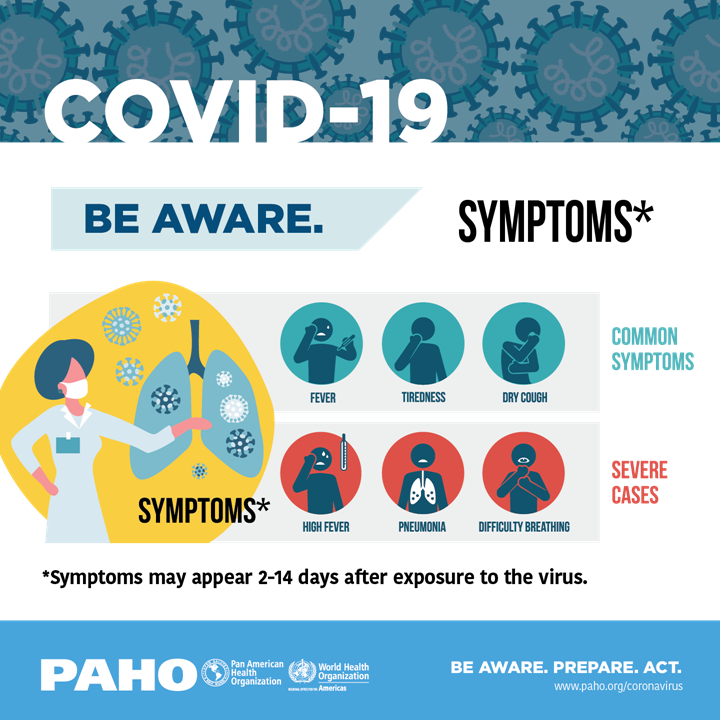