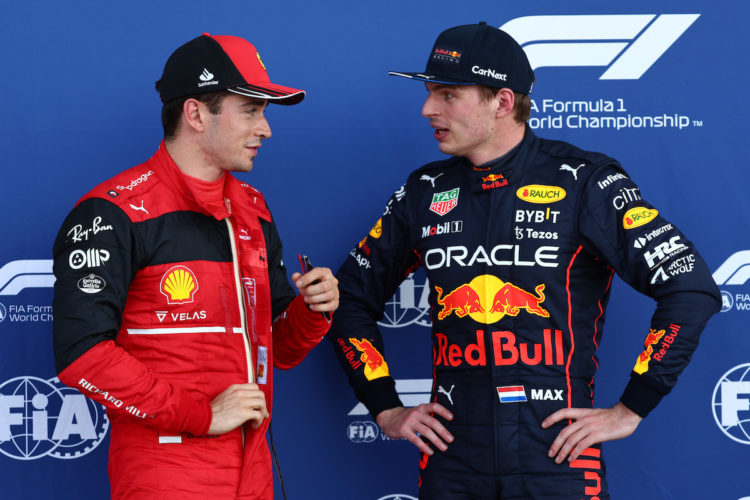 Charles Leclerc says that he hopes Ferrari’s ability through slow-speed corners will be enough to keep rivals Red Bull behind during the Miami Grand Prix.

Leclerc will start Sunday’s race from pole position, with team-mate Carlos Sainz alongside him on the front row.

The energy drink-backed squad has displayed strong pace in high-speed throughout the 2022 Formula 1 season thus far, meaning it could take advantage of Miami’s two long straights to complete an overtake.

However, Leclerc is hopeful that Ferrari’s advantage through slow corners will be enough to keep Ferrari out of reach at the head of the field.

“Of course if they are close to us it’s going to be very difficult,” Leclerc admitted.

“But we have got this advantage in the corners where hopefully they will be too far to then have an opportunity of overtaking us in the straights.

“Only time will tell and we’ll only see that tomorrow, but again the pace of the car is quite strong so we’ll focus on ourselves and we’ll see where we are tomorrow.

“Carlos and I are very competitive so it’s great for the team and we’ll push to try and finish in the same positions tomorrow.”

Leclerc’s pole position lap was his third of the season, bringing his career total up to 12, drawing level with Gerhard Berger and David Coulthard.

The Monegasque driver admits that his effort on Saturday was far from clean, with the new Miami track surface offering little grip to the drivers.

“And also the last corner was good even though it was very tricky with the change of tarmac today, the grip was much lower there compared to anywhere else on track, but at the end it was quite a good lap anyway.”