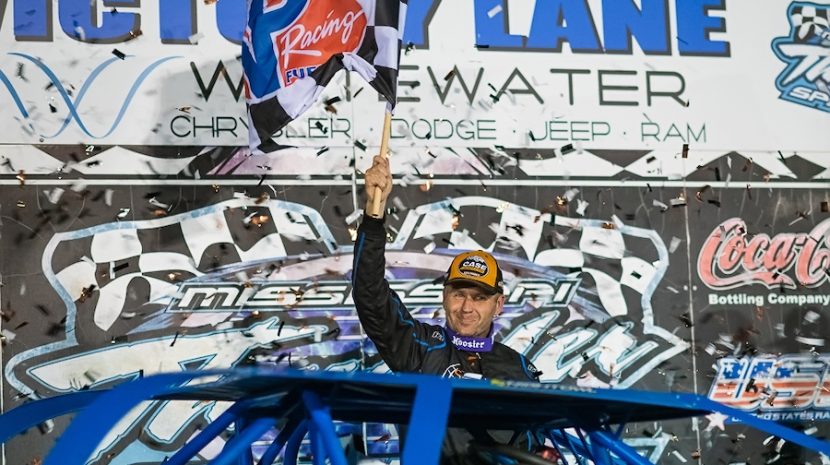 As the 2021 Rookie of the Year caught the tail of the field, he tangled with Lance Mathees, sending them both spinning.

Marlar inherited the lead from Bruening and held on to win the $50,000 prize in the Dairyland Showdown finale.

The Winfield, Tenn., driver started on the pole and tried to conserve his Longhorn chassis early in the 75-lap feature. That strategy almost cost him as Tyler Erb swung around the outside to take the lead on lap 19.

“I was kind of milking it there the first part of the race, trying to conserve my tires,” Marlar said. “I was just trying to keep a distance and not kill my tires, and I just messed up. I was driving too easy, and I just let [Tyler Erb] get to my outside and pass me, and after that, it was a long race.”

The “Winfield Warrior” admitted luck played into the race’s outcome, being in a position to strike after he passed Erb back with 16 laps to go.

“[The win] fell back in my lap; I definitely got lucky to end up winning it,” Marlar said. “I hate it for Tyler Bruening, he definitely was deserving of the win there, and it just didn’t work out for him.

“Hopefully, if he stays after it and keeps working hard, he’s definitely going to get some [wins].”

The Dairyland Showdown win is Marlar’s 10th career World of Outlaws win and first of the season.

Erb crossed the line second, his second podium finish in as many days.

“I knew Bruening was underneath me there, and we really raced hard and clean,” Erb said. “I kept getting lower in [turns] three and four, and then in [turns] one and two, I’d kind of washout, and never got quite low enough to where I needed to be.

“We raced back and forth for four or five laps, and I finally got clear, but I drove in too hard into one and two, and that’s how I realized how rubbered it was. I just got back in line and unfortunately had a caution, and Mikey [Marlar] got by me on the [lap 59] restart.”

Josh Richards finished third, his first top-five of the 2022 season. The four-time series champion stated he feels it’s a step in the right direction for the Boom Briggs-owned team.

“It feels like a win,” Richards said. “This year’s been a struggle, to say the least. The team hasn’t stopped, there’s a lot of heart and determination, and thankfully we’re able to have a nice, solid run tonight, and hopefully, we have something to build on.”

“I would’ve taken the [$2,000] just to start,” Giossi said. “We got lucky there at the beginning, and the cards kind of went our way. Our car was pretty good; our pro-powered MB Customs was rolling along pretty well.

“It still hasn’t set in yet, but anytime you can run in the top five or top 10 with these guys, they do it for a living, and they’re the best at what they do, so coming home fourth tonight really made the weekend.”

“We didn’t have a good heat race, but we made some adjustments, and the car was real good in that [Last Chance Showdown],” Erb said. “Starting that far back, I was getting nervous, but we had a good enough car to work our way up through there, so we’re just glad to get up into the top-five for sure.”

Erb also extended his points lead for the third straight night — 98 points ahead of Max Blair.

There’s No Stopping Looney In MLRA

World Of Outlaws Late Models Take On The Bristol Bash

Roberson Tops Battle Of The Bay

Laney Takes Round Two Of Clash

SOMERSET, Ky. – The Valvoline Iron-Man Late Model Southern Series has rescheduled their trip to Duck River Raceway Park (Lewisburg, Tenn.) to November 3-5.  The Deep Fried 75 was originally scheduled for October 27-29, but conflicting dates with the All-American 400 at Fairgrounds Speedway in Nashville prompted the change. ...

HANFORD, Calif. — The third year of IMCA Speedweeks in California opened at Keller Auto Speedway, as Bobby Hogge IV won the first of six races in the series.    Hogge IV took the lead on the start from his outside front row redraw spot, and dominated the main event ...

TULARE, Calif. — The Central Valley IMCA Clash held round three at Tulare Thunderbowl Raceway on Wednesday night, with 56 cars on hand for the three divisions.   Cody Laney matched Tuesday’s performance by redrawing the front row and leading all 25 laps with only minor pressure.   Bobby Hogge ...

BRISTOL, Tenn. — Ricky Weiss’ confidence never wavered Saturday at Bristol Motor Speedway.  After Chris Madden thundered past him for the lead in the World of Outlaws CASE Construction Equipment Late Models feature, he knew he had to find an extra gear.  Weiss found that gear in his Sniper ...

Davenport Holds Off Larson At Bristol

Davenport Drives Away At Brownstown

Five Teams Compete for Lucas LM Rookie Of The Year

Davenport Does It In Wisconsin

WoO LMS Notes: On To Wisconsin

Xtreme Dirtcar Series By The Numbers

All Stars Heading To Williams Grove For Tommy Classic

It’s All Scott In Heartland Hustle

Garrett Alberson Tops Will McGary Tribute At I-30 Speedway

Thunder On The 1000 Islands At Can-Am Postponed

Illini 100 On Tap For World Of Outlaws Late Models