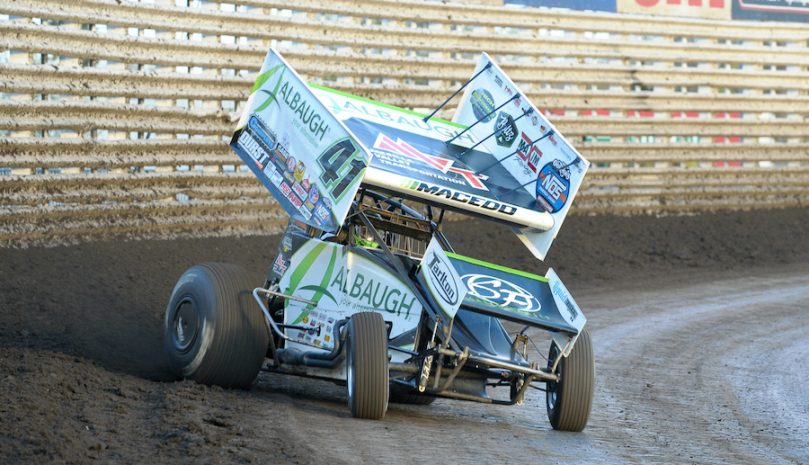 KNOXVILLE, Iowa — Carson Macedo emerged victorious amongst a stout field of 43 410 sprint cars on a beautiful night at Knoxville Raceway.

It was Macedo’s third victory at the historic half-mile track and his sixth overall triumph this season.

With the World of Outlaws weekend rained out, Macedo and the Jason Johnson Racing No. 41 team made the trek to Knoxville worth their trip.

Sam Hafertepe Jr. shot out from his pole position to lead early in the non-stop 20-lap 410 main event ahead of Tasker Phillips, Justin Henderson, Carson Macedo and Aaron Reutzel.  Henderson was a master of the low side early, grabbing second from Phillips.  Reutzel used the same line to pass Macedo for fourth, and then Phillips for third on lap three.

Macedo recovered to gain fourth from Phillips on lap four.  Up front Henderson stuck the low side of turn one on lap six to take the point.  On lap seven, Macedo wended his way past both Reutzel and Hafertepe to move into the second spot low in turn three.

Reutzel got past Hafertepe for third on lap nine, while the leaders got into lapped traffic just past the halfway point.  For the second week in a row, Austin McCarl was on a charge, moving from row nine to sixth at one point.

Henderson cruised up front, but Macedo was slowly reeling him in. His winning pass came on the low side of turn one as he shot between Henderson and the berm. He never looked back to claim his third career win here.

Hafertepe recovered to finish second, ahead of Henderson, Reutzel and Kerry Madsen.

“It was just really technical there,” Macedo said. “You had to be really patient when you were on the bottom, and really aggressive on the top. It was getting pretty thin and ledgy. Hats off to my team, it was a last-minute decision to come here. I’m really happy that we did. Any time you can get laps here at Knoxville is a plus.  I got a decent start.  I jumped into fourth, and I ended up in the middle one time.  I remember Jason Meyers telling me never to be in the middle…be on the top or the bottom.  Knoxville is just a really tricky race track.  It’s all about track position, being in the right spots and connecting that grip at all times.”