SUV driver, 33, gets a one-year ban after he was filmed swerving on the road by another motorist

A woman who sent police dashcam video of a driver dangerously undertaking her is being prosecuted because the footage showed she was in the wrong lane.

Philip Baxter, of Kettering, was recorded swerving between lanes on the A45 Nene Valley Way in Northampton in January following an alleged ‘road rage’ incident.

Footage showed Baxter’s Toyota Land Cruiser undertaking another vehicle as they drove along the road. The other driver, a 59-year-old woman from Deene, flashed her headlights at him before moving over a lane.

Baxter, 33, then drove his SUV across the carriageway, forcing the other car towards the central reservation barrier.

He was found guilty of dangerous driving at Northampton Magistrates’ Court on November 8, following a trial.

Baxter has since been disqualified from driving for 12 months and will have to take an extended driving test. He was also ordered to complete 100 hours of unpaid community work and pay £545 costs and £95 victim surcharge. 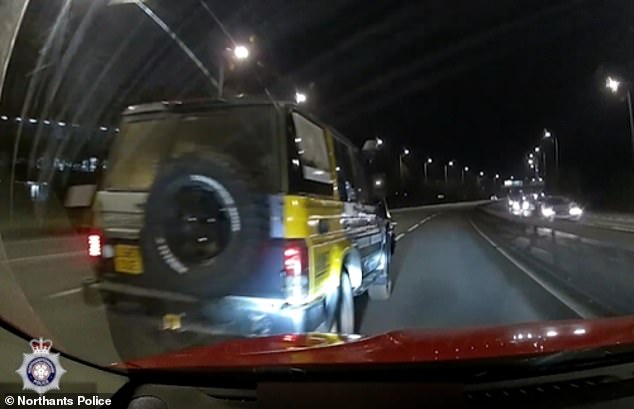 The dashcam video was uploaded to the police force’s online portal shortly after the incident.

Upon review of the clip, police believed Baxter ‘deliberately caused’ the other driver to take ‘evasive action.’

However, he pleaded not guilty to the offence and told his trial that his SUV had a mechanical defect which caused him to swerve. This claim was not accepted by the court.

‘Baxter’s recklessness could have easily ended in tragic consequences, and I’m pleased the courts have dealt with him positively.’ 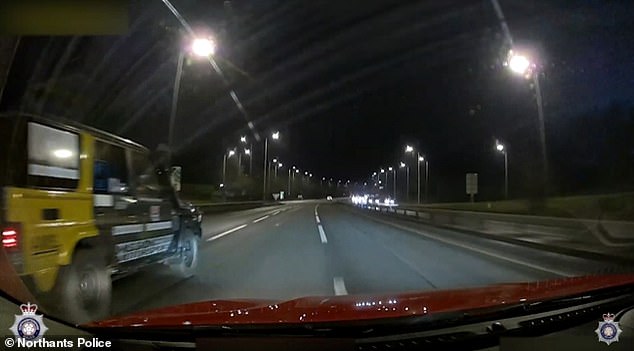 Philip Baxter, of Kettering, was recorded driving dangerously on the A45 Nene Valley Way in Northampton in January 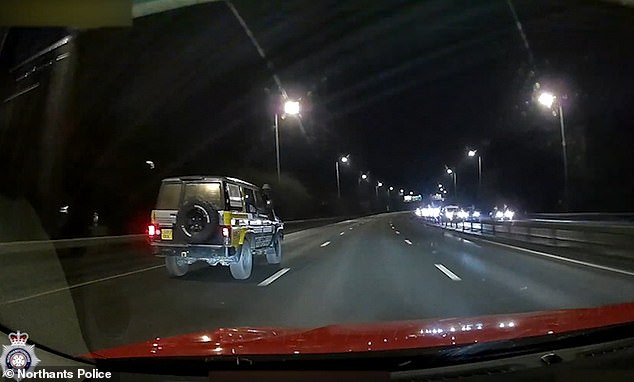 Video showed Baxter’s Toyota Land Cruiser undertaking another vehicle as they drove along the road. The other driver flashed their headlights at him before moving over a lane. Baxter, 33, then drove his SUV across the carriageway, forcing the other car towards the central reservation barrier

The driver who submitted the video to police, a 59-year-old woman from Deene, was also prosecuted for driving without due care and attention.

Police determined the footage showed the woman remained in the off-side lane prior to the incident, when the nearside lane was clear.

She received noticed of intended prosecution and opted to complete an education course.

PC Allsopp-Clarke added: ‘The success of Operation Snap is down to the continued support from the public, who enable us to act against driving offences we otherwise wouldn’t see.

‘Hopefully this case demonstrates that we take all instances of poor driving very seriously and we will prosecute offenders accordingly, which can only be a good thing to help keep our roads safer.

‘However, it also serves as a reminder that we examine footage for evidence of offences by all parties. So, if you commit an offence as well as the person you’re reporting to us, you may face prosecution too.

‘We will not overlook one offence to prosecute another.’

Keyword: SUV driver, 33, gets a one-year ban after he was filmed swerving on the road by another motorist