The question of introducing hydrogen cell tech to power Formula E cars’ motors has been tentatively discussed between teams as the championship already looks beyond next year’s new Gen3 car to its long-term future.

But one of Formula E’s key manufacturers is adamant hydrogen is of no interest to its strategy.

The Renault-Nissan alliance has been represented in FE since the outset, with Nissan taking over branding of the e.dams team from Renault in 2018 and acquiring it outright for next season.

Nissan was part of the initial brainstorming meeting which was held in Monaco in April and touched on future ideas such as a possible hydrogen element being introduced and some modifications to the styling of cars to bring greater brand identity.

“We go back to the basic purpose, why are we doing racing? We are racing for excitement, for our fans, and also for the zero-emission in society and for the planet.

“Then definitely we are transferring the know-how to our road cars.”

And that’s where Nissan’s disinterest in hydrogen comes in.

The strategy that Nissan employs in electrified motorsport is to have two such technologies: e-power (only allowing the electric motor/s to power the wheels) and battery electric racing.

According to Gupta “hydrogen is first not end-to-end zero-emission” and “the public face the challenge of public infrastructure”, making it of limited technology transfer value.

“When it comes to battery-electric, 70% of our customers can charge at home,” he explained.

“Whether you can get hydrogen at home, I’m not sure.”

That lack of road-to-track or vice versa synergy significantly contributes to putting Nissan off any hydrogen competition in the near future.

“There are a couple of things which we are fully aligned on,” Gupta added. 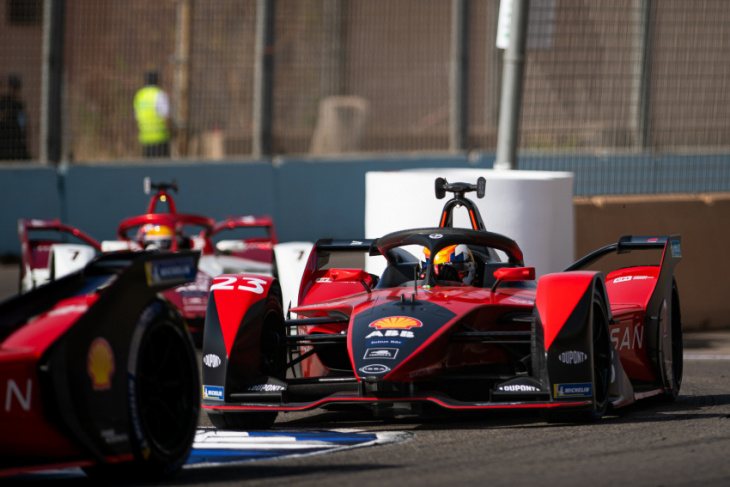 “The first is how we lift Formula E, as the most exciting, zero-emission race [series] around the world. I think this is something which we all wish we were all aligned with, which is the awareness of Formula E related to zero emissions but also the driving excitement.

“We also debated on what exactly we should have in common? I would say we share the opinion that we should have a little more in common while keeping the brand distinctiveness in each of the cars.”

This comment touches on the possibility for the second phase of the Gen3 from 2024 onwards incorporating potential styling cues for each manufacturer.

This is believed to be popular with most of the manufacturers but could be difficult to introduce ahead of the Gen4 rules set which is due at the end of 2026.

Nissan has an objective to achieve carbon neutrality throughout the life cycle of its products by 2050.

Keyword: Why hydrogen would be off-putting for a key Formula E marque